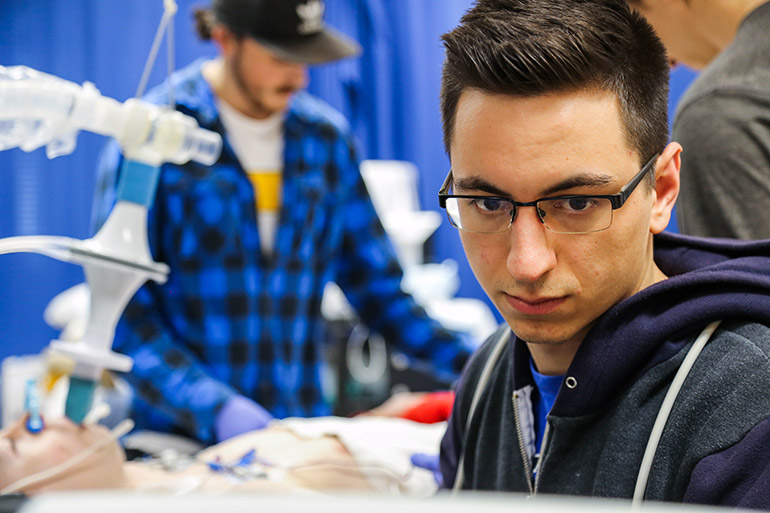 Ryan Hoiland has spent the past few years conducting research with UBCO’s Centre for Heart, Lung and Vascular Health.

A UBC Okanagan student, who has literally climbed mountains to conduct his research, has reached the peak of his university career by winning a top academic recognition.

Ryan Hoiland, who received his PhD in Interdisciplinary Graduate studies from the School of Health and Exercise Sciences today, is the Governor General Gold Medal winner for UBC’s Okanagan campus. It’s an award presented annually to the graduate student with the highest academic achievement. He has been at UBC Okanagan for nine years, earning three degrees: Bachelor of Human Kinetics, Master of Science, and finally his PhD.

Whether it’s the top of his class, or the top of the mountain, Hoiland’s goal has been to research and understand how the human body adapts to low oxygen levels.

“When people experience low oxygen—either at high-altitude or perhaps through illness— the brain works to increase the amount of blood it receives to maintain a stable supply of oxygen. Failure to do so can end in catastrophic consequences and neurological injury,” he explains.

Hoiland is no stranger to heights—conducting his research at high-altitude labs in Peru, California and Nepal. This research, along with his scientific travels, has led to more than 45 peer-reviewed published papers—15 as lead author—an accomplishment that Hoiland attributes to the mentorship of his supervisor Professor Phil Ainslie. He met Ainslie in the third year of his undergraduate studies. Less than a year later, the pair were 5,050 meters high near Mt. Everest Base Camp as part of an international research team.

“After that, I was hooked,” says Hoiland of the experience that satisfied his innate sense of curiosity.

Ainslie has taken several teams of scientists to the Mt. Everest research station, conducting numerous research projects each time. Much of Hoiland’s PhD work investigated high-altitude natives, like the Sherpa, who have lived in this low oxygen environment over thousands of years to determine if they possess unique evolutionary adaptations. One study, published in the Journal of Physiology this April, demonstrated that the blood flow response to low oxygen levels is distinctly different between high-altitude natives and those who live near sea level.

“Despite similarly low-oxygen levels in the blood, the Sherpa, who have lived at high-altitude for more than 25,000 years, had a lower oxygen supply to the brain,” he says. “This suggests that their brains may have evolved to be more resistant to low oxygen levels. Future investigation into how and why these differences exist may provide us valuable information that will help us better understand how the brain responds to low oxygen levels in certain clinical populations.”

While Hoiland’s research may sound lofty, it has practical applications for the general population—especially people living with Chronic Obstructive Pulmonary Disease (COPD). An earlier PhD study demonstrated that oxygen therapy in COPD patients may reduce the risk of dementia by improving the health of blood vessels in the brain.

While difficult and intriguing questions have motivated Hoiland and fuelled his endless sense of curiosity, he believes it was the team culture in Ainslie’s lab that truly underscores his combination of academic and research success—including winning the UBCO’s student researcher of the year award in 2018

“I cannot stress enough the importance of the team I have been a part of,” says Hoiland. “Being part of a supportive group that is working together to grow and explore new research avenues is vital and what initially drew me to UBC Okanagan.”

“I have been working in the field of cerebral vascular physiology for more than 15 years and cannot express how impressive Ryan was as a doctoral student,” says Ainslie. “Overall, out of the last 40 doctoral students I have supervised or co-supervised, Ryan has proven to be the best all-around at research and has continued to improve his abilities at an astounding rate.”

Ainslie notes Hoiland’s research will provide new information about the fundamental basis and mechanisms of how the human brain can cope with low levels of oxygen.

“His capacity for succinct scientific writing and communication is exceptional, and he possesses remarkable presentation skills,” says Ainslie. “There is no question that Ryan will become a figurehead within the field of human and molecular vascular physiology, and that at this point in his career is deserving of being awarded the 2019 Governor General’s Gold Medal.”