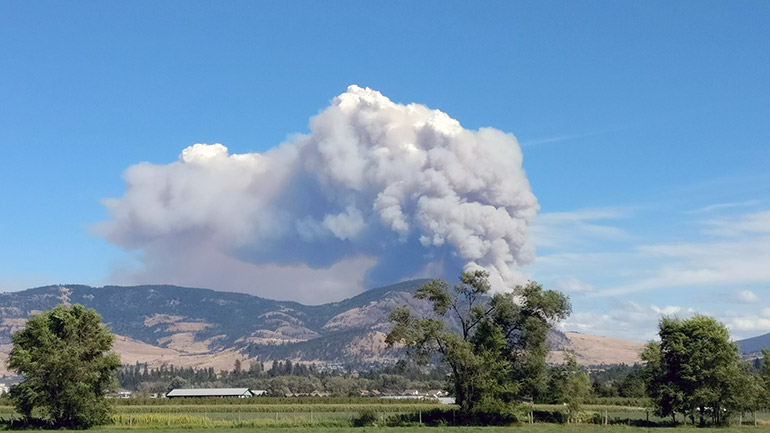 A plume of smoke rises above the southern British Columbia community of Joe Rich during the 2017 wildfire season. Communities across Canada are facing an increased need to plan for wildfire prevention. (Credit: Troy McMillan)

Estimated to cost Canadian communities $5 billion a year by 2020, the price-tag of responding to climate change impacts could grow to $43 billion a year by 2050, and new research suggests the response requires involvement from all levels of government, industry and the public.

Over the past year, researchers from the University of British Columbia and the University of Waterloo worked with the Federation of Canadian Municipalities to conduct a survey studying municipal adaptation planning across Canada. Building on results from a similar survey in 2012, the research team found that over the past 10 years, above-average rain and snowfall and more severe storms are the most frequent weather events experienced by local governments.

“Canada’s economic well-being depends on adapting vital infrastructure to this new reality,” says Kevin Hanna, director of the Centre for Environmental Assessment Research, in the Irving K. Barber School of Arts and Sciences at UBC’s Okanagan campus, and one of the project’s leaders.

“These effects are driving important planning discussions and decisions about how to adapt to a changing climate,” Hanna says. “More than half of local governments surveyed have initiated formal adaptation planning discussions in their community within the last four years.”

“Canada’s municipalities influence half of the country’s greenhouse gas emissions. Critical physical and natural infrastructure is especially susceptible to changes in the climate,” says Mark Seasons, professor with the School of Planning at the University of Waterloo. “All levels of government, industry and the public must work together to reduce emissions and respond to climate impacts.”

The 2018 Climate Change Adaptation Survey of Canadian Municipalities ran from January to April 2018, and was open to all local governments in Canada. Other key findings from the survey include:

“Responding to these changes will be expensive across the country,” says Seasons. “The economic benefits of taking action now, rather than later—or at all—are becoming clearer every day.”

The survey indicates that local governments see the connections between adaptation planning and emergency management and disaster response, however, they struggle to take action because of a lack of human and financial resources.

“The shortage of dedicated human resources for adaptation planning is not a new issue and may, in large part, explain the degree to which planning takes place within local governments,” says Troy McMillan, research associate with the Centre for Environmental Assessment Research at UBC Okanagan.

“Further study is needed to examine how formal planning processes are conducted or approached at the local level and how expertise across disciplines is considered. Sustainability, urban resilience and disaster risk reduction, in particular, are complementary lenses that should be examined more fully,” adds McMillan. “The report will help inform other projects studying local adaptation planning in Canada, and play a significant role in identifying areas for future capacity-building work and knowledge sharing.”