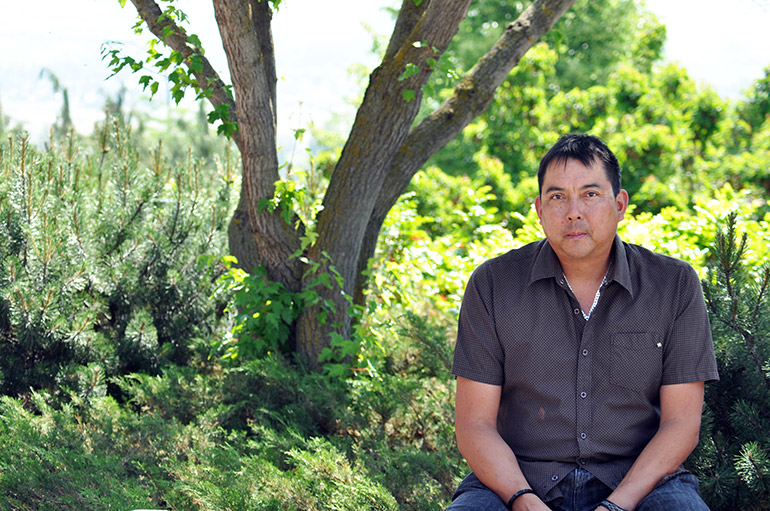 Gregory Younging was posthumously recognized on June 19 with the Association of Canadian Publishers President’s Award for his contributions to the Canadian publishing industry and the association.

It’s the Association of Canadian Publishers’ highest honour—and on June 19, UBC’s Gregory Younging was posthumously recognized with the President’s Award for his contributions to the Canadian publishing industry and the association.

“This award means a lot to my family, and I know it would have meant a lot to him,” says his daughter, Nimkish O’sullivan-Younging. “Everything he did in life he did well and with pride—that was extremely important to him. It feels good to know that his hard work and efforts are getting the recognition they deserve.”

Born in Halifax, Nova Scotia to a Cree mother (Rosalyn) and Chinese father (George), Younging was always proud of his heritage, she explains. As a member of the Opaskwayak Cree Nation, he publically solidified this pride by taking on his mother’s name of Young and linking it with his father’s name of Ing—as Young-Ing for a time, before making the legal change to Younging.

Holding a master of arts degree in northern and native studies from Carleton University, a master’s degree in publishing from Simon Fraser University, and a PhD in educational studies from UBC, Younging devoted his career to righting history and elevating cultural contributions of First Nations in Canada through his writings and teachings.

Younging served as managing editor of Theytus Books—the first Indigenous-owned publishing house in Canada from 1990 to 2004, before taking on the role of publisher in 2015.

In 2007, he joined UBC Okanagan’s department of community, culture and global studies (CCGS) as an assistant professor, where he was key in the development of the Indigenous Studies program.

Sue Frohlick, head of CCGS, says Younging’s contributions to the department were many, noting that his book, Elements of Indigenous Style: A Guide for Writing By and About Indigenous Peoples, is widely used in the department.

“It’s become an invaluable resource for our faculty in teaching and research,” she says.

Generous with his time, Younging held numerous positions over his career, including serving as chair of the Indigenous Peoples Caucus of the Creator Rights Alliance, as a United Nations delegate and as a delegate to the Assembly of First Nations.

In 2010, Younging accepted a part-time secondment to the Truth and Reconciliation Commission of Canada, serving as the assistant director of research until 2012.

During his appointment, he took the lead planning, commissioning and managing the editing of research projects, and was a member of the writing team for three national reports. Younging passed away in May 2019.

President of the Association of Canadian Publishers Glenn Rollans says Younging more than earned this recognition through his volunteer work with the association and his accomplishments as a book publisher. Younging was particularly persistent and successful, he says, in focussing attention on the important role publishers can play in pursuing the calls to action from the Truth and Reconciliation Commission.

“The President’s Award is not presented every year, but when we do award it, it goes to recipients within the ACP membership who have distinguished themselves in book publishing in Canada and through service to the association,” says Rollans. “We present this award to mark our gratitude to and respect for Greg.”

At home, Younging was a single father to two daughters who say he never let work commitments get in the way of what mattered most.

“He raised me well. He taught me about integrity and he always nurtured my talents,” says O’sullivan-Younging. “My dad did a lot of amazing things—but to me he was just my dad.”