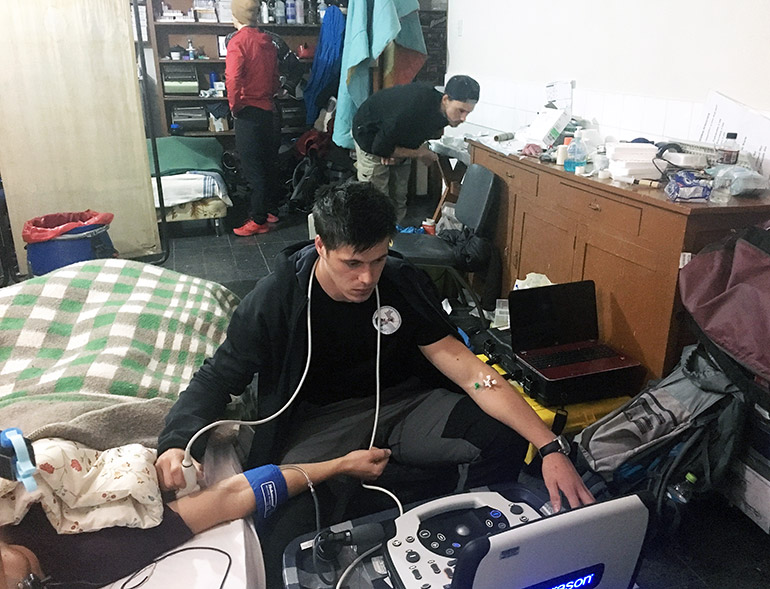 During the international expedition to Peru, Ben Stacey a doctoral student from Cardiff, United Kingdom conducts a blood vessel function test on a local Andean resident. Researchers are trying to understand how some Andeans, who live at high altitude, develop altitude sickness.

A group of international researchers went to great heights to better understand how high altitude affects both newcomers and Indigenous populations.

Roughly the size of an NFL team, the 2018 expedition included undergraduate and graduate students, as well as researchers and physicians from six countries and 11 universities. No easy feat to organize or execute, says UBCO’s Mike Tymko, expedition co-leader.

“Despite encountering serious logistical challenges, each of the proposed studies was completed at both sea level and high altitude,” says Tymko, who has just completed his PhD in the School of Health and Exercise Sciences.

It was not without challenges, he notes. The first being the logistical nightmare when more than 15 per cent of the expedition’s research equipment was delayed in customs at Lima airport.

The group, however, had a happy conclusion. The team’s perseverance, he says, ensured that all four metric tons of equipment and consumable research items, valued at $1.5 million, arrived at the high-altitude site. This allowed the team to set up six temporary laboratories that worked almost around the clock.

This achievement was part of the Global Research Expedition on Altitude-related Chronic Health—or Global REACH, the acronym the researchers devised for the far-reaching connectivity of the team and the study results.

“The results of the collective research will progress our understanding of how changes in blood flow to different stimuli, at low and high altitudes, alters the human body,” says Tymko. “The findings directly affect our understanding of high-altitude exposure on health. This research is relevant for people who suffer from conditions that are characterized by low oxygen including those with lung or heart disease.”

Along with several high-altitude studies, the team also wanted to help a group of local Andeans—a portion of the population who have developed a genetic mutation from their habitat. These are people who have developed an advanced form of altitude illness where their blood becomes extremely thick.

“In particular, our work explored important mechanisms that underpin both adaptation and maladaptation to high altitude in Indigenous populations to South America,” Tymko says, explaining they have an excess of red blood cells in their body. “It’s like their heart is pushing sludge through their blood vessels.”

Tymko says the findings of the 15 studies will result in a comparable amount of peer-reviewed publications over the next few years.

“These studies have the potential to improve quality of life and treatment strategies for those suffering from low oxygen levels in their body,” says UBCO Professor Phil Ainslie, Canada Research Chair in Cerebrovascular Physiology in Health and Disease.

As Tymko’s doctoral supervisor and Global REACH co-lead, Ainslie has organized several high-altitude research expeditions, including trips to Everest, that aimed to investigate how low oxygen affects the human body in both healthy and diseased populations.

The findings of the expedition will be released throughout 2019, the first of which is now live in the journal Hypertension.