A group of UBC Okanagan students have won the opportunity to launch a science experiment into the stratosphere with help from the Canadian Space Agency.

Shortly after beginning their studies at UBCO last year, the students formed a team — the Atmospheric Cloud Chamber of the Okanagan — and over the winter competed against other university teams in the Canadian Stratospheric Balloon Experiment Design Challenge.

“We are working on a cosmic ray detection system where we hope to detect different cosmic particles across the lower atmosphere,” says team manager Leonardo Caffarello.

It’s one of two experiments selected to fly onboard a high-altitude research balloon launched by the Canadian Space Agency between August 21 and 31 in Timmins, Ontario. The balloon will rise to about 120,000 feet and be airborne for at least 10 hours.

Carried skyward by the balloon, a vapour-filled enclosure or cloud chamber will detect subatomic particles called pions and muons, formed when cosmic rays collide with atoms in the Earth’s atmosphere. As they pass through the chamber the decaying particles will leave visible trails and at regular intervals, a camera will take pictures of what’s happening.

Analyzing the images using intelligent software — machine-learning algorithms — to identify the kind of particle that made each trail, the students will gain a better understanding of particle behaviour at various altitudes.

It may be a new way to examine how climate change is affecting the planet.

“With these results, we will be able to estimate at what height pions are created and whether the height at which they decay has changed due to pollution,” he explains. “The particles we are detecting have a direct relationship with the atmospheric environment we identify them at. This is why we are so interested in identifying the different particles as we go high up in the stratosphere.”

During the experiment, the students will monitor the exact altitude when pions decay into muons. Detecting decay at a different altitude than previously observed may indicate a significant change in the atmospheric environment.

“If we are able to correlate our data to climate change information we could hopefully use it as another way to measure climate change,” says Caffarello.

“The students’ passion for aerospace science and technology is truly incredible,” says Engineering Prof. Jonathan Holzman, the team’s faculty supervisor. “They approached me in the fall with an idea for detecting particle decay and were looking for help to realize this idea. I was more than happy to help. I watched them assemble their design, through many trials and tribulations, and we are waiting to see it take flight later this summer. That is very exciting.”

Caffarello says the experiment is the result of a chance meeting of like-minded students at UBCO’s student orientation program Jumpstart.

“We were all part of UBCO’s aero club and we realized we were all passionate about space,” he says. “When I learned about this competition and I started studying the specific techniques needed, I realized we needed people with very different skill sets so we could all complement each other’s work.”

Caffarello, from Brazil, is going into his third year of physics, while Javier Perez Tobia, from Spain, is entering his second year of math. Mexico’s Hector Carrillo Estrada is a second-year computer science student, Giulia Rossi, from Italy, is a third-year mechanical engineering student, and Philip Noah Eibl, from Austria, is going into his third year of a combined degree of computer and data science.

“While we do have specific, scientific goals,” says Caffarello, “one of our biggest goals is to learn something new and have fun while we’re doing it.”

The student team has received a grant from the UBC Tuum Est Student Initiative Fund and is currently raising funds to meet additional expenses for the trip to Ontario. Information about the project can be found on the Atmospheric Cloud Chamber of the Okanagan team website at: ac2oubco.wixsite.com/ac2o 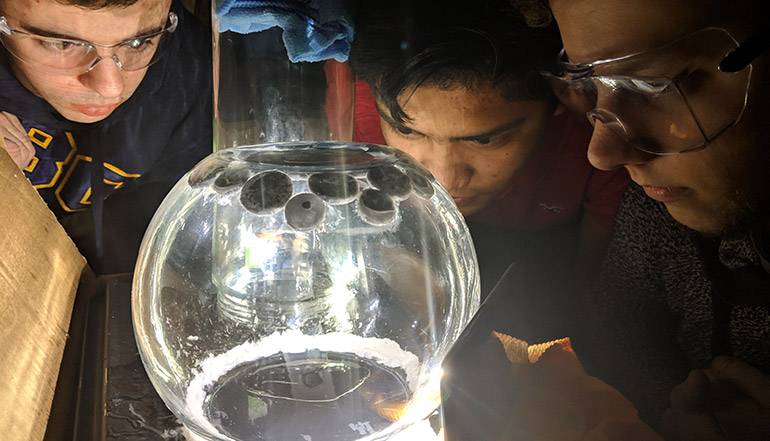 A team of students from UBC Okanagan with a prototype ‘cloud chamber’ that will be launched by high-altitude balloon and used to study cosmic particles in the Earth’s upper atmosphere in August.