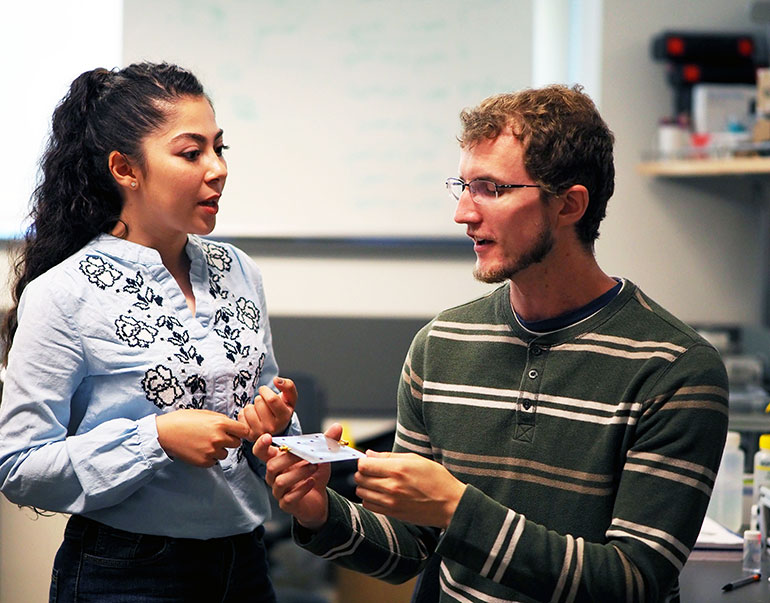 UBCO graduate students Kiana Mirshahidi and Ben Wiltshire demonstrate how small and portable the tiny ice detection senor is. The device has many ramifications, especially for the airline industry.

A new sensor, that can detect ice accumulation in real-time, might be a game-changer when it comes to airline safety and efficiency.

Two distinctly different research teams — one that designs microwave sensors and microelectronics systems, and the other that investigates ice-repellent materials and extreme liquid repellency — joined forces for this latest research coming out of UBC Okanagan’s School of Engineering.

The researchers aimed to develop a sensor that could detect the precise moment when ice begins to form on a surface. Due to their high sensitivity, low power, ease of fabrication, and planar profile, the team chose to use microwave resonators. The device, explains Assistant Professor Kevin Golovin, will make it easier to detect and manage ice accumulation on aircraft, noting there have been quite a few airline tragedies directly linked to icy airplane wings.

“The ice detection systems used today are quite rudimentary. For example, pilots visually detect ice on aircraft wings before de-icing in flight,” says Golovin, who runs the Okanagan Polymer Engineering Research and Applications Lab. “And on the tarmac, certifying that the aircraft is free of ice after de-icing is also done by visual inspection, which is susceptible to human error and environmental changes.”

Planar microwave resonator sensors are simple traces of metal deposited onto a plastic, and yet they are mechanically robust, sensitive and easy to fabricate explains Assistant Professor Mohammad Zarifi, head of UBCO’s Microelectronics and Advanced Sensors Laboratory.

“The sensors give a complete picture of the icing conditions on any surface, like an airplane wing. They can detect when water hits the wing, track the phase transition from water to ice, and then measure the thickness of the ice as it grows, all without altering the aerodynamic profile of the wing.”

The pair, along with graduate students Benjamin Wiltshire and Kiana Mirshahidi, have recently published their research findings in Sensors and Actuators B: Chemical. This is the first report on using microwave resonators to detect frost or ice accumulation, says Zarifi. The reverse is also possible, and the sensors can detect when ice is melted away during de-icing, he adds.

And the sensitivity and precision of the sensors means the detection occurs in real time. That could make both ground and in-flight de-icing faster, cheaper and much more efficient.

“The resonator detected frost formation within seconds after the sensor was cooled below freezing,” explains Wiltshire, the first author of the study. “It took about two minutes at -10 C for the frost to become visible on the resonator with the naked eye—and that’s in one small area in ideal lab conditions. Imagine trying to detect ice over an entire wingspan during a blizzard.”

Planar microwave resonator devices have recently demonstrated significant performance in sensing, monitoring and characterizing solid, liquid and gaseous materials. However, research on the detection of ice and frost has not been undertaken until now, says Zarifi, despite the clear benefits of real-time, sensitive and robust ice detection for transportation and safety applications.

“This is a brand-new method for detecting ice formation quickly and accurately,” says Zarifi. “The radiofrequency and microwave technology can even be made wireless and contactless. I wouldn’t be surprised if airlines start adopting the technology even for this upcoming winter.”