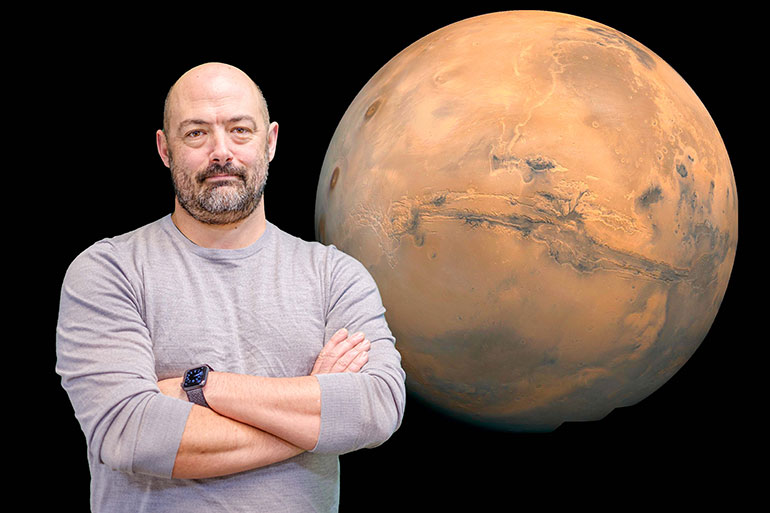 Gord Binsted, dean in the Faculty of Health and Social Development at UBC Okanagan and one of the research leaders.

While a trip to the red planet may still be years away, a team of Canadian researchers are headed to a simulated Mars habitat on Hawaii’s Mauna Loa at the end of the month. Their mission launches with the objective of designing and running experiments to measure the brain function of astronauts as they become fatigued.

“Crew time on space missions is planned right down to the minute,” explains Gord Binsted, Dean in the Faculty of Health and Social Development at UBC Okanagan and one of the research leaders. “The challenge for us is to create an experiment that is simple enough for any of the crew to perform within very tight time constraints, likely 20-30 minutes per day, while still generating valuable scientific data.”

The researchers will be expected to continue the regular operations and maintenance of the habitat while they conduct scientific work, which Binsted says will help them understand the rigours astronauts will be under as they design their experiments.

The team will study a concept called cognitive fatigue, where the brain begins to make poor decisions the more tired it gets.

“Previous research has shown that the brain still functions normally if you’re a little fatigued. But at a certain point, the cumulative effect of over-fatigue means that the brain falls off a cliff and things like memory recall, mood and decision making are significantly impaired,” says Binsted. “Poor decision making can be fatal in the context of a space mission.”

Olav Krigolson, associate professor at UVic and co-lead researcher, says the team hopes to use an electroencephalogram (EEG) to map the electrical activity of the brain as it becomes fatigued to predict when it’s about to fall off that cliff and lead to poor decisions.

“We’ll be using a simple but powerful consumer-grade EEG device called Muse and a smartphone to conduct our experiments,” says Krigolson. “Ten years ago, this kind of equipment would have been much larger and cost $100,000, but today we’re able to carry everything in one hand for just a few hundred dollars, making it ideal for a space mission.”

The research team will be in the Mars simulation for eight days. While they won’t ever leave the surface of Earth, Binsted says the experience will be as real as it gets.

“The site is barren and completely isolated from civilization. There’s a 40-minute time delay on all communications, the seven-member crew will be living in a 1,200-square-foot habitat and we’ll have to wear spacesuits to go outside,” explains Binsted. “It’s all pretty surreal.”

“I was even asked by the organizers what size spacesuit I wear,” he laughs. “I had no idea what to say.”

Krigolson says the experience is a once in a lifetime opportunity for the crew but he’s also excited about the impacts of the research.

“The equipment we’re using is inexpensive and readily available,” says Krigolson. “Our findings could have wide-ranging impacts on any occupation facing long work hours and critical decision-making, including emergency room physicians, pilots or heavy equipment operators.”

Science aside, Krigolson says the opportunity to become an ‘almost astronaut’ was too good to pass up.

“As soon as I found out, I called my mom to tell her I finally achieved my lifelong dream to go to space, sort of,” he jokes. “This is probably the closest I’ll ever come to getting to Mars and I’m very humbled to be a part of it.

The team departs on November 28 and will be blogging their experience throughout the mission at destinationmars.ca. Team members include Olav Krigolson from the University of Victoria, Gord Binsted from UBC Okanagan, Kent Hecker from the University of Calgary, Michaela Musilova from HI-SEAS International Moonbase Alliance (IMA) and the University of Hawaii, and PhD students Chad Williams and Tom Ferguson from UVic.