New, safe models of clothing donation bins heading back to the streets 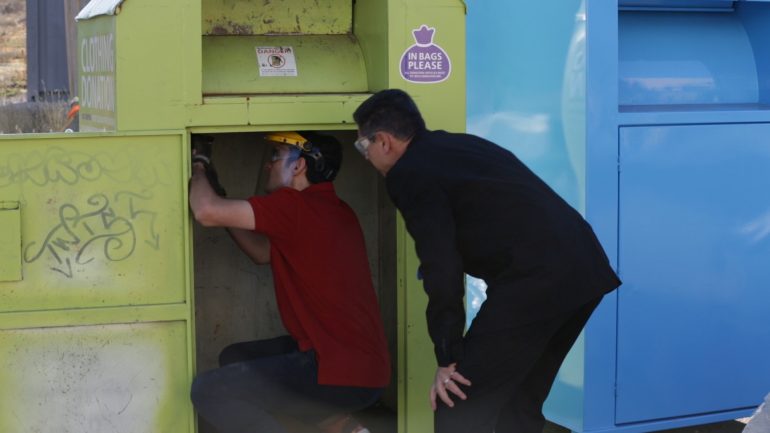 UBCO engineering instructor Ray Taheri watches as a student prepares a bin before installing a retrofit that will make donation bins safer.

This time last year, charities across Vancouver pulled their clothing donation bins off the street after a number of people had climbed inside the bins and died.

“When this last death happened in Vancouver, we decided to move all our bins off the street,” says Slav Gudelj with Big Brothers’ Vancouver office. “It did have a huge impact on our bottom line and is going to cost us about half a million dollars.”

The donation bin industry is a multi-million dollar enterprise across North America, raising funds for charitable organizations including the Salvation Army, Diabetes Canada, Big Brothers and Sisters, Goodwill and many others. While Diabetes Canada was able to address safety issues by modifying its bins in January 2019 and did not pull any out of circulation in BC, Big Brothers turned to engineers at UBC Okanagan for help.

Gudelj, who is general manager of clothing donation operations for Big Brothers, says the organization now has about 180 boxes sitting in storage.

UBCO School of Engineering instructor Ray Taheri has a few of those bins parked outside the engineering building. As part of his first-year design course, he tasked his students to come up with a way to modify the bins and make them safer.

Taheri also established a task force to look at the bins and this spring received a $75,000 donation from Firstline Foundation to design and retrofit the existing bins. The students worked with bin manufacturing company Rangeview Fabrication to find reasonable, viable and economically realistic proposals.

At the same, other students—including a graduate student who is studying the social side of this issue and a mechanical engineering graduate student—looked at specifics of the individual deaths. Taheri says most deaths happened within a few hundred yards from a homeless shelter and took place between the hours of midnight and 6 a.m.

“Most engineers know that modifying an existing design is often more difficult than starting from scratch. It was a perfect challenge for my students,” says Taheri.

The students came up with a number of solutions, including where these bins should be located, and self-locking features that automatically come on at specific times. He also notes, if the bins are full, people take items outside the bins and then perhaps climb in to search for more items. If the bins had a sensor, alerting the organization that they were almost full, this would prevent piles of donations left outside.

“We ended up with a number of different models and eventually settled on four prototypes—each a little bit different,” says Taheri. “Some will come with more bells and whistles, some will be a very basic model. But definitely they are a much safer than what we had in the past.”

Gudelj is back on the campus this week meeting with Taheri and the engineering students to finalize plans and get nearly 180 of the newly retrofitted bins back into the community over the coming weeks and months. He credits the engineers for ‘stepping up’ and not ignoring a chronic and dangerous issue.

Taheri says it has been a great learning curve for all his students, and staff and faculty who have put in hundreds of hours of volunteer time on this project.

“I can’t stress enough how proud I am of my students and my colleagues in the School of Engineering,” he says. “These are the type of people we have at UBC Okanagan. Our students are not only very clever they are also very caring and compassionate. These students are making changes to have a positive impact on society. They are a beacon of great possibilities to come.”