Being on the ice manages stress for UBC staff 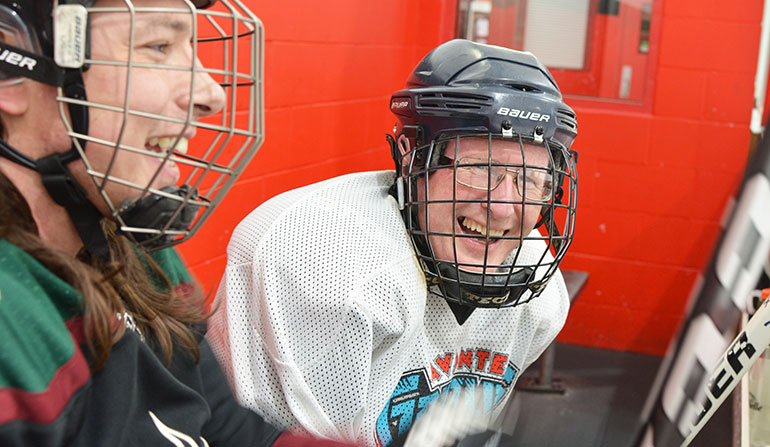 Despite being a huge NHL fan, Phil Bond’s TV timeout from ice hockey ended up lasting more than a quarter of a century.

The Student Experience Office (SEO) senior manager laced up his skates for a couple informal games which were made possible through the UBC Healthy Workplace Initiatives Program.

“It was the perfect opportunity to try (ice) hockey again. The last time I played was in a beer league in Penticton in 1994,” said a beaming Bond. “Everyone pitched in to loan me equipment like skates, elbow pads and a helmet. I was a bit nervous at first, but it felt like I was playing with family.

“When I had a chance at a breakaway, I felt the other (skaters) back away and let me have my shot. Everybody out there wanted me to do well.”

Stickhandling is second nature to Bond who plays ball hockey once a week. “It was just like ball hockey. My favourite time of the week is when I’m driving home after and you’re physically exhausted but your mind is clear.”

Although skating is one area which posed a challenge for Bond because he grew up in a west coast rainforest in Tahsis which was about 90 to 120 minutes, depending on the season, away from the closest rink in Gold River on Vancouver Island.

The four ice times at the Ultimate Training Rink were secured through a grant from the Healthy Workplace Initiatives Program. Aboriginal Programs & Services (APS) submitted the application for $1,000 in funding.

“We are always looking for ways for our students to manage stress in a positive way. Hockey is something many students do back home and so it’s a natural fit,” said APS Director Adrienne Vedan. “We like the fact that, like our student ice times, both male and female staff took part.”

For Mykela White, skating was a good way to connect with fellow staff in a relaxed environment. “The ice time was a nice stress reliever from work. And being able to interact with coworkers in a fun setting really helps to build relationships,” said the SEO Operations Assistant.

Like any physically demanding team sport, it is hard to think about anything else when competing in the heat of the moment. Stress-related issues seem to fade and fall into perspective once a player is dripping with sweat. In contrast to a regulation-sized ice surface, the smaller 3×3 ice rink provides a more physically intense workout as you are either chasing somebody or being chased.

“Getting on the ice and just leaving the rest of the day behind was a great benefit from a mental health standpoint,” recalls Support Analyst Rob Hartmier. “There is nothing better than some physical activity which takes a ton of concentration to forget anything that was bothering you from your regular nine to five grind.”

Due to an injury, Matt Litzenberger had not laced up his skates in 20 months before suiting up in West Kelowna.

“The group of people who came out made it an extremely enjoyable atmosphere and I have been talking to all of my colleagues about it ever since. Things like this bring different parts of the campus together. From me in Facilities Management to IT personnel to professors to administrative staff and managers,’ said the Fire, Life and Safety Electrician.

“It brought such a sense of community. I think what I will remember most was seeing the smiles on everyone’s faces. I look forward to more ice times in the future,” he added.

Since being established in 2008, the UBC Healthy Workplace Initiatives Program has funded close to $750,000 for more than 300 initiatives. The program supports UBC faculty and staff through funding to support team building, sustainable behaviour change, embedding wellbeing and reducing individual’s health risks.

There are two more ice times to be scheduled this spring. To sign up email: dan.odenbach@ubc.ca