From wildland firefighter to researcher and professor

For researcher, professor and former wildland firefighter Mathieu Bourbonnais, the journey was just as sweet as the destination 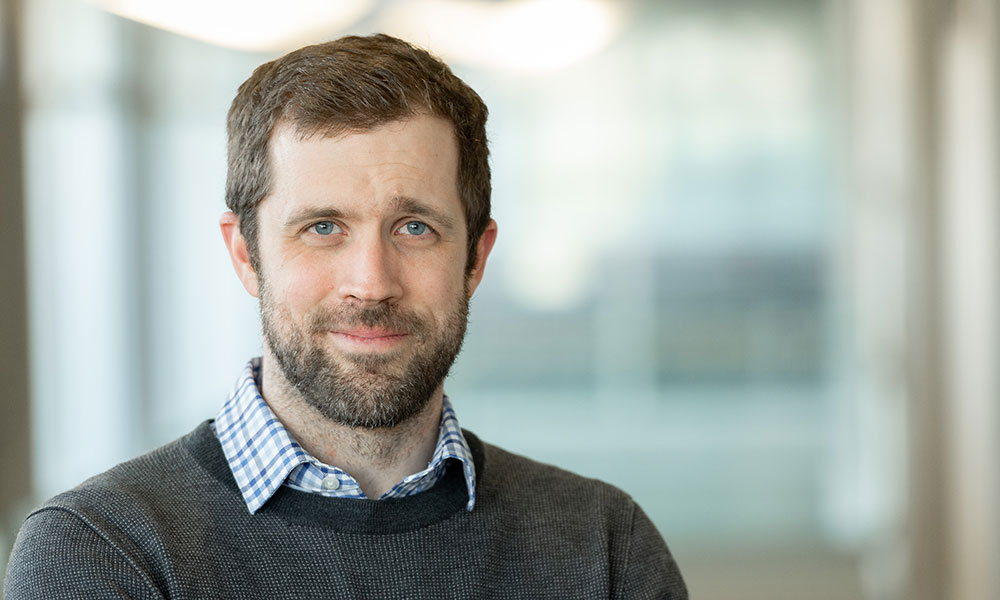 “I had days where an 18-hour shift would go by in a flash. I’d be out on the fire line and it would hit me, ‘Wow, I’ve been out here all day and haven’t stopped once.'”

MATHIEU BOURBONNAIS ALWAYS LOVED THE OUTDOORS. Born in Edmonton and raised in St. Albert, Alberta, in what he describes as an outdoorsy family, he learned to appreciate nature from a young age.

“We were always outside,” he says. “Hiking, camping, you name it — we did it — some of my best memories are just being outside and poking around in the bush.”

Find out more about our Geospatial Information Sciences minor

But Bourbonnais’ career path wasn’t as clear to him as his love of the landscape.

“I didn’t really know what I wanted to do as a profession, but I always had higher grades in arts and social sciences, so I ended up studying history and psychology,” he says.

Bilingual in French and English, Bourbonnais attended Campus Saint-Jean, a francophone campus at the University of Alberta (U of A). During summers, he worked as a conservation officer for Alberta Parks at Dinosaur Provincial Park.

While there, it was a conversation with a colleague that got Bourbonnais thinking about a career as a wildland firefighter.

After graduating from U of A, Bourbonnais applied to Alberta’s highly competitive Wildland Firefighter Rappel Program — where men and women were trained to rappel out of helicopters to fight wildfires in remote areas. After six weeks of training, he was accepted.

A FEW YEARS IN FIRE

Bourbonnais completed the program and was hired on to one of the province’s nine rappel crews.

“The idea behind these crews is that there’s a lot of remote country, and many wildfires can be difficult to access,” he says. “Wildland firefighters need to action fires as quickly as possible. If crews are landing kilometres away and hiking in, that can take hours depending on the terrain and is actually quite dangerous because you have fuels between you and the fire.”

“The rappel crews functioned in a paramilitary style where one person was in charge of the whole operation,” explains Bourbonnais. “They were the one communicating with the pilot — all other communication during a rappel was done by hand signal,” he says.

Each crew consisted of seven team members, six people to rappel and one spotter. When the spotter determined a safe route, the crew would rappel down the rope into the fire zone one-by-one. With the crew on the ground, the spotter would then swing open the cargo arm on the helicopter and large bags — containing tools, fire pumps, hoses and chainsaws — were lowered to crews. 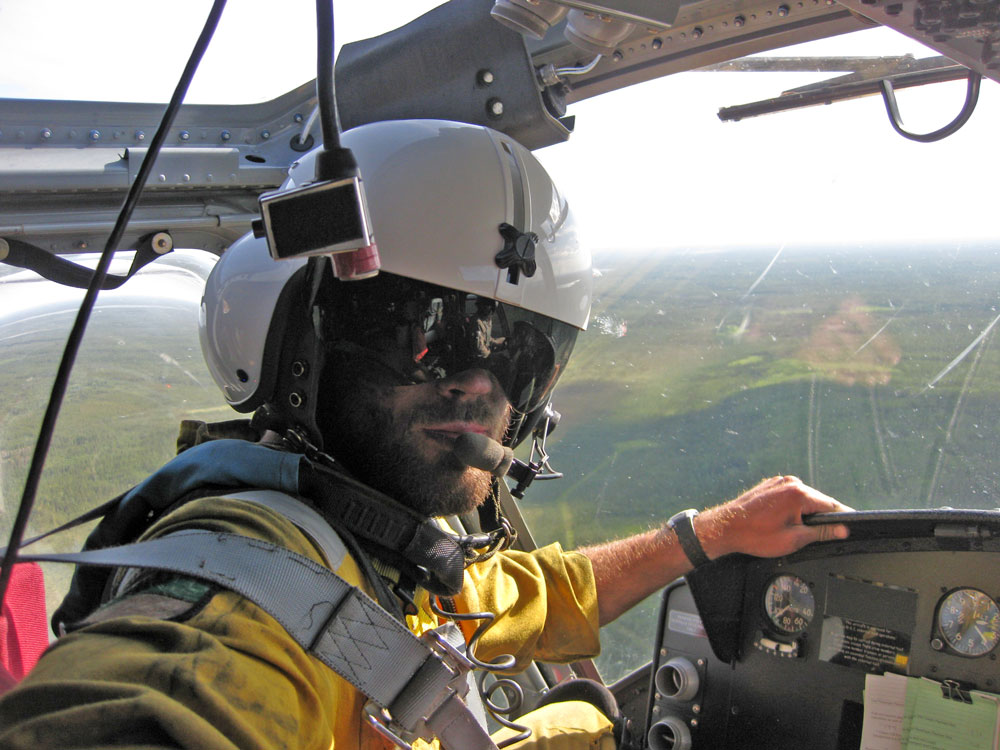 It was gruelling work. Bourbonnais’ shift rotation consisted of 15 days on, six off days, often working 12 hours or more per day.

“It sounds like a crazy number of hours to work, but I had days where an 18-hour shift would go by in a flash. I’d be out on the fire line and it would hit me, ‘Wow, I’ve been out here all day and haven’t stopped once,’” he recalls.

“At first, it sounds scary that they leave you in the bush next to a wildfire, but it’s always the expectation that there will be no significant change in fire size because helicopters can’t fly at night. So, if something did go sideways, you’re really on your own.”

Despite the risks, Bourbonnais enjoyed his time working as a wildland firefighter. “It was exciting — the rush of adrenaline I got when I was rappelling from the helicopter and working on a fire. It was like nothing else,” he says.

Enthusiasm aside, Bourbonnais admits there were times when the job could get uncomfortable.

“If you have forest fires to begin with, it’s likely hot out already, and then you are rappelling and working on the fire line. The heat is extreme and, combined with heavy smoke, it can be a lot to handle,” he says, noting wildfire crews, unlike city firefighters, are not equipped with oxygen or respirators.

“Generally speaking though, I never felt unsafe,” he explains. “Yes, I dealt with some minor cuts and burns but it was to be expected in that line of work.”

MAPPING OUT A CAREER PLAN

Bourbonnais spent six years as a wildland firefighter, working with the Alberta Wildfire Service and Parks Canada. With both organizations, his team was given daily briefings on the status of large wildfires.

“I started to get really interested in satellite imagery,” says Bourbonnais. “I began asking around to get more information and started learning about geomatics, geographic information sciences (GIS) and remote sensing.”

Upon further research, Bourbonnais discovered there was a big demand for people trained in GIS, turning his new interest into a viable career option. Bourbonnais enrolled in a two-year, post baccalaureate program in geomatics at the University of Victoria, working on his Honours thesis with geography professor Trisalyn Nelson.

“It’s crazy how meeting one person can change the direction of your life,” says Bourbonnais. “After my BSc, Trisalyn talked me into doing my master’s — so I ended up doing that for two years, followed by a PhD studying grizzly bear health, habitat, and movement ecology.” 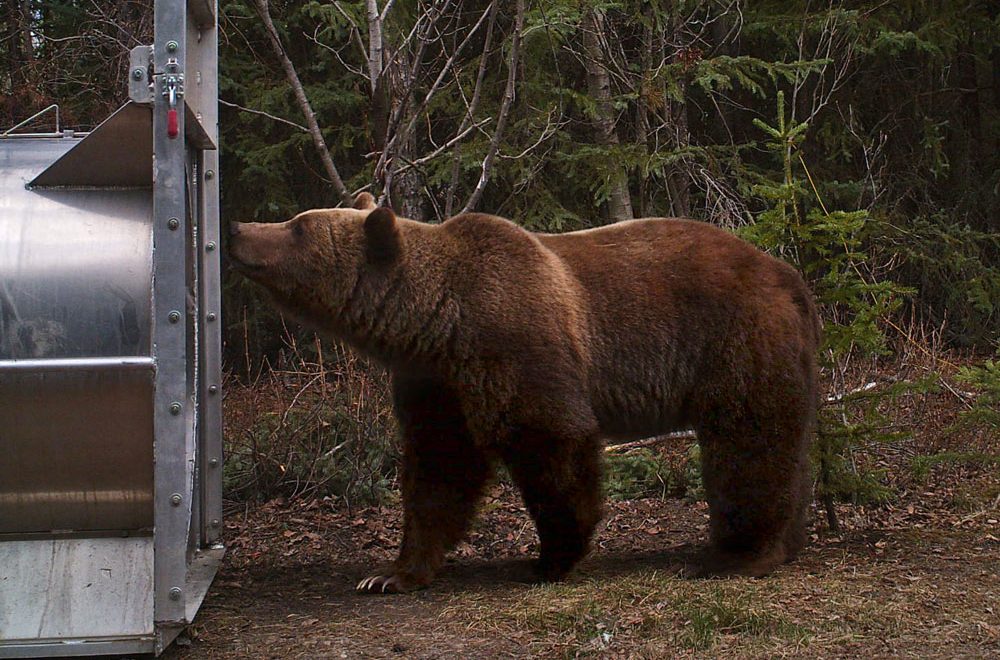 Grizzlies in Alberta have been listed as a threatened species since 2006. Current estimates suggest there are approximately 700 remaining in the province.

“Most of my research was working with global positioning system (GPS) telemetry data. Every year the Foothills Research Institute Grizzly Bear Program would capture 15 to 20 bears and fit them with a GPS collar during the non-denning period,” explains Bourbonnais.

“We were able to track individual grizzly bears which helped us develop statistical models to better understand their movements and behaviours and how these were influenced by humans and habitat.”

Bourbonnais’ background in geography, spatial analysis, statistics and modelling set him up well for a career teaching GIS at UBC Okanagan.

In his courses, students learn the theory and application of geospatial tools and technologies.

A hands-on learner himself, Bourbonnais wants his students to do more than memorize a textbook.

“Students who take my classes leave with an understanding of geographic data, broadly applicable GIS tools, how to use them and what they can tell you about spatial patterns and processes.”

“Having a background in firefighting and wildlife management, I try to draw a lot of that material into the class,” he says.

In his labs, Bourbonnais works with wildfire and grizzly bear telemetry data to demonstrate to students how the data can be analyzed to solve real world problems.

While Bourbonnais’ experience with GIS leans towards the environmental side of things, he tries to show students other uses.

“GIS has so many applications,” he explains. “It’s important for me to illustrate that, so we also do work related to social sciences, business, health sciences and other areas.”

Beginning January 2020, all BSc and BA students with third year standing will have the option to pursue a minor in GIS, known as GISC on the UBC Okanagan campus. Bourbonnais call this an exciting opportunity.

“I hope as the GISC program grows, I start to see more students from other disciplines in my classes. Having GIS training will be really advantageous to students in their future endeavours.”

One of Bourbonnais’ current research projects focuses on how to better prepare communities for challenges presented by wildfire. The project, Living with Wildfire, recently received funding from the New Frontiers in Research Fund (NFRF).

“Fire is part of the Okanagan Valley’s landscape and an important part of the ecosystem — communities need to understand the risks and get equipped to handle them,” says Bourbonnais.

Typically flown from a plane, helicopter or drone, LIDAR measures the time it takes for the emitted light to reflect off something and return to the sensor.

In the summer of 2018, the Okanagan Basin Water Board, in collaboration with communities and the province, flew LIDAR over the entire Okanagan Valley. It’s given Bourbonnais’ team a detailed 3D model of the forest to examine.

“The energy emitted by the sensor reflects off trees, logs, shrubs, the ground and even buildings. It’s very precise and there’s a lot we can do with that data in terms of mapping forest structure and wildfire fuel loads,” he says.

Aside from the natural science aspect of the project, Bourbonnais’ team is also researching the social dimensions.

“There’s definitely a stigma associated with wildfire, and I understand why,” says Bourbonnais. 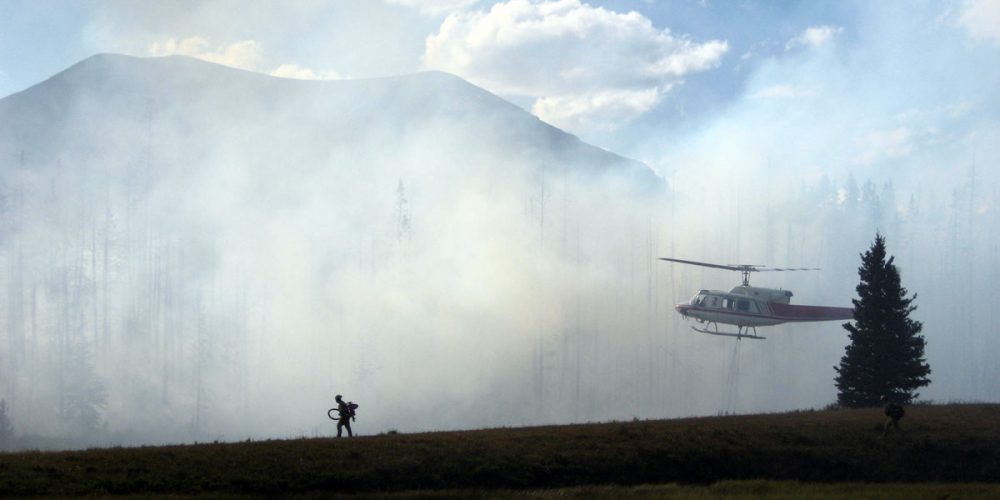 “Whenever a fire is threatening homes, of course people are angry and scared— but what if we could shift attitudes and get to a point where people understand the very important role fire plays in our ecosystems and communities accepted the use of prescribed burns and other activities to proactively manage wildfire risk?” asks Bourbonnais.

“When we hear about wildfires in the news, it’s generally negative and sensationalized — even in movies it’s about firefighters losing their lives in a heroic act,” he says.

“Having done it, I never felt like a hero. I was just out doing a job. Wildfires aren’t a battle or a war, they’re an important part of our ecosystems, and I’m hoping this project will help clarify that message.”

Living with Wildfire is funded through 2022, and Bourbonnais hopes to secure additional funding to make it a long-term, multi-year project.

Bourbonnais relocated to Kelowna from Victoria in July of 2018.

A dad to Hadley, two, and Nolan, six months, Bourbonnais says it was the right move for his family.

“We’ve really enjoyed living here — we love the landscape,” says Bourbonnais. “It’s a fair bit warmer than Victoria, which I like, and we’ve found Kelowna to be a really fun city.”

“I feel like I’m at a good place in my life right now,” says Bourbonnais. “Sure it took me a while to figure out what I wanted to do but looking back, I wouldn’t change a thing.”