Changing how we understand a mother’s role 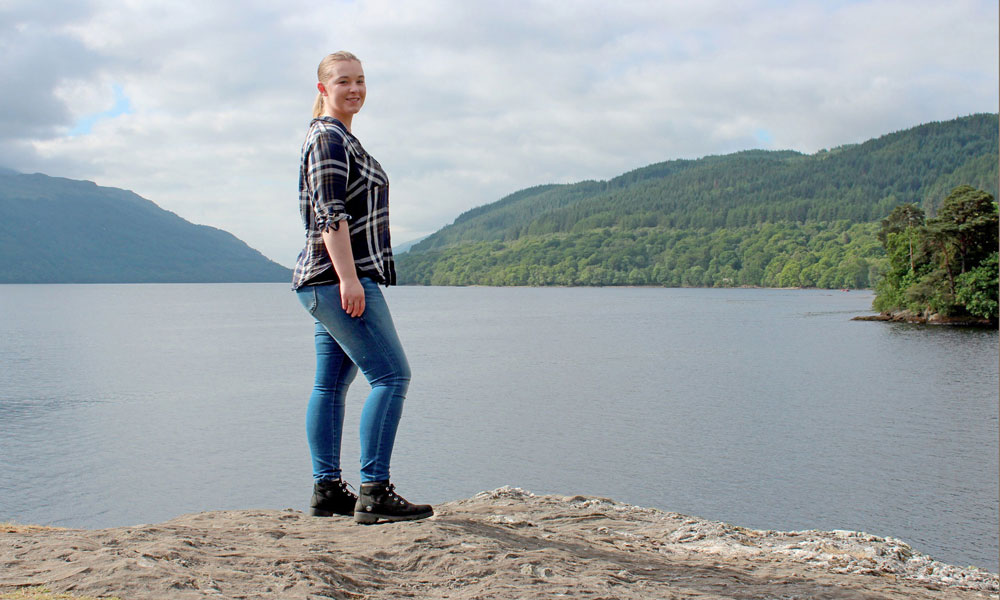 "When I came back from England, I found that I was able to access the materials in a different way. My professors here were supportive and offered many opportunities, making it clear I could go further with what I was learning in English."

KYLA MORRIS HAD PSYCHOLOGY ON THE BRAIN WHEN SHE STARTED studies at UBC Okanagan. It was her major, in fact. But an inspiring English professor and a study abroad experience in England punctuated by Shakespearean literature and philosophy caused a plot twist in Morris’ academic path.

“It was scary to change my focus because I had it all planned out in my mind,” says Morris, who took on a double major in psychology and English in the third year of her bachelor’s degree. “I had to adjust the way I planned my future and the expectations on where I would be going.”

Pursuing a degree in psychology was something Morris thought about throughout high school. She felt a psychology degree offered a clear path to job opportunities.

Find out more about our Master of Arts in English

But taking critical theory courses in English allowed Morris to make connections that were not apparent before. “They opened my mind to things I didn’t know were available, combining my passions in psychology and English.”

Morris credits first-year English instructor Melissa Jacques with getting her excited about the possibilities of an English degree.

“Dr. Jacques encouraged me to push boundaries and I wasn’t limited in terms of outlining an approach. Writing essays wasn’t just about demonstrating what I learned; I was able to move beyond that.”

Jacques noticed Morris’ spark early on: “Kyla has been a stellar student from the moment she arrived at UBC Okanagan. She introduced herself to me months before our first class in English 151 (Critical Studies in Literature) and asked for a reading list because she couldn’t wait to get started.

“That unusual first-year request reveals what is most striking about Kyla’s attitude,” says Jacques.

Morris’ six-month exchange experience at the University of Birmingham in the UK — where she was introduced to critical theory — cemented her decision to seek the double major.

“When I came back from England, I found that I was able to access the materials in a different way. My professors here were supportive and offered many opportunities, making it clear I could go further with what I was learning in English.”

Coupling English and psychology was the perfect match for Morris. She was excited to discuss and critically analyze what she was reading and learning, and she meshed concepts from each discipline to get the most out of her classes.

In writing an essay on Mary Shelley’s Frankenstein, Morris used a psychoanalytical approach to her ideas and theories, allowing her to demonstrate and apply learnings from her psychology classes.

“Studying English isn’t just looking at books or reading stories. You have to look at other forms of cultural implications. I know that I can expand and push my limits and contribute to changing the way we look at things.”

Along the way to earning her undergraduate degree, Morris honed in on a career in academia: “My goal is to be a professor at a university and have further influence, through research and working with students.” This has pushed Morris to work harder in order to stand out as an academic.

She looked at a number of institutions to pursue a master’s degree in English, and was even accepted to more than one other university. But her positive experience at UBC Okanagan and the support of her professors kept her at UBCO.

“I wasn’t done with UBC, and I knew that I could make the most of my master’s here in the two-year program. I’m making the most of what is available to me here to help me stand out as a candidate for a future doctoral program.”

Now in the second year of her master’s degree, Morris is working on her thesis — which reconceptualizes the ways we think of motherhood — and Jacques is her co-supervisor.

When thinking about motherhood, Morris says we often restrict our understanding to only women who have given birth, focusing on a heteronormative model of motherhood and a set of implied conventions or norms.

Morris doesn’t yet have any biological children of her own, but has played the primary care role for a sister who is 12 years younger. Even though Morris has taken on a mothering role, she has been treated differently because she does not fall within a conventional, socially accepted category of mothering.

She seeks to understand the social life of mothering and all the ways this role can be inhabited by those who are not biological mothers, creating new opportunities for recognizing motherhood in the multitude of forms it may take.

Morris is examining feminist and psychoanalytical theory to understand motherhood in special terms, looking at how motherhood is attached to women’s bodies and gendered ideals. She is using gothic short stories as a source, particularly works by Angela Carter, which move beyond thinking of motherhood as just a role.

“My goal is to change the ways we understand what a mother’s role is — that she is not just a caregiver, but is a person with her own ideals and ideas…that she also has her own story to tell.”

Associate professor George Grinnell is Morris’ other thesis co-supervisor. He says Morris’ research promises to open up new spaces for thinking about maternity and motherhood that lie beyond conventional choreographies of biological mothers and daughters.

“Kyla is the rarest of students: exceptionally capable and driven to think through challenging ideas in ways that courageously recognize how academic concepts can serve the wider public,” says Grinnell.

Morris’ drive is evidenced through her work as a teaching assistant. When she began working as a TA for first-year English in 2018, she was struck by an idea and ran with it.

One of the required readings for the class stood out to Morris: Yann Martel’s Life of Pi. The Man Booker-winning novel has sold 15 million copies worldwide in at least 40 different languages and was adapted for film by director Ang Lee, winning four Academy Awards in 2012.

Morris had never met Martel, but knew one of his close friends — her aunt, as it happens. That was Morris’ “in,” so she reached out, asking Martel if he’d consider speaking to all 192 UBCO undergraduates registered in first-year English.

The result: an hour-long, question-and-answer teleconference between Martel and UBCO students, facilitated by Morris herself. 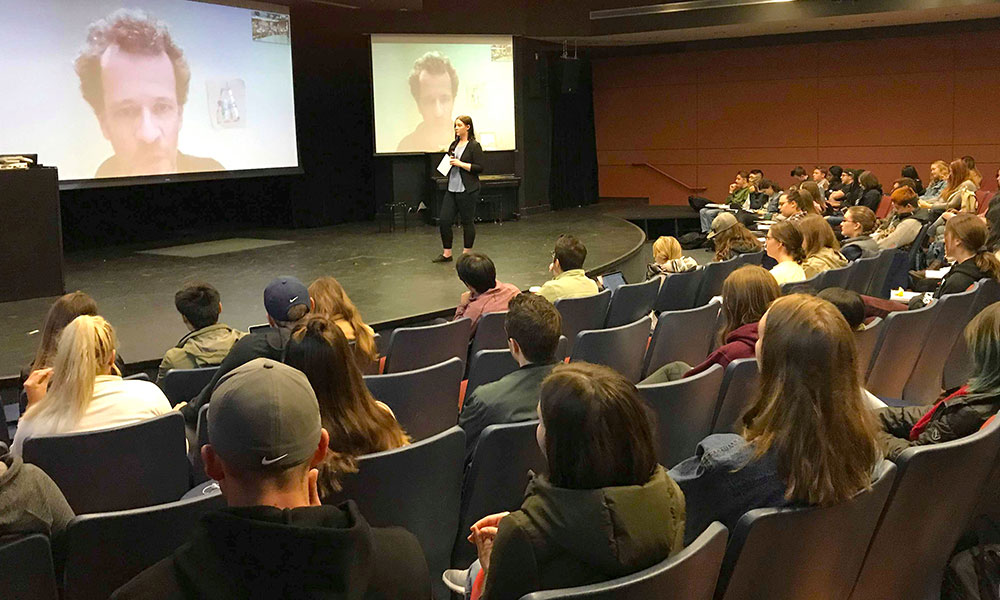 Morris jokes, now, about the “absence of any useful tips on the internet for ‘how to write an email to a world-famous author who knows your aunt.’” Writing that first email to Martel was “one of the most nerve-wracking moments of my life,” she says.

But Morris had one goal in mind and remained focused: “to foster our students’ interest in English and the book.”

“I had the ability to give our students a once-in-a-lifetime opportunity to ask Yann Martel directly what they wanted to know about the book. My hope was that the ability to ask these questions would foster deeper discussion of the novel’s complexities and themes, and encourage students to move beyond a surface-level interaction with the text.”

The experience for students was rewarding and illuminating. While Morris collected questions in advance to spark some conversation, follow-up questions from students ignited a lively discussion. She says Martel’s responses were robust, wide-ranging, frank and eye-opening.

Morris’ enthusiasm extends beyond the classroom. She worked with fellow master’s students to launch the Humanities Graduate Student Conference on UBC Okanagan’s campus in spring 2019. The conference was a place to discuss and celebrate the research of humanities students, and to foster a sense of community and kinship with all graduate students.

The committee is working again to organize a conference for spring 2020, focused on the development of graduate-level academic and creative works.

What an incredible day filled with inspiring presentations and even more inspiring people. We have created so much more than a conference – we have created a community! I could not ask for a better group of people to share these experiences with. Thank you to @carkar for being an outstanding keynote speaker, and thank you to my amazing teammates and co-organizers @deseraekoby @po_it_try @mehnaz_w ! #hgsc2019 #letstalkaboutwalls

LOOKING TO THE FUTURE

While she is an outstanding scholar and writer, Morris is motivated by something beyond fulfilling expectations and getting good grades. The intellectual challenges and the research demanded of her are also what feed her.

Jacques says it’s been a pleasure to watch Morris progress from first-year through her undergraduate degree and into the Masters of Arts program. Jacques says it’s what her PhD supervisor calls ‘a mind in action.’

“As co-supervisor for Kyla’s master’s thesis on representations of the maternal in literature and contemporary theory, I’m excited to see where she goes from here,” says Jacques.

Given her current trajectory, Morris may one day be the award-winning author fielding questions from UBC Okanagan English students.