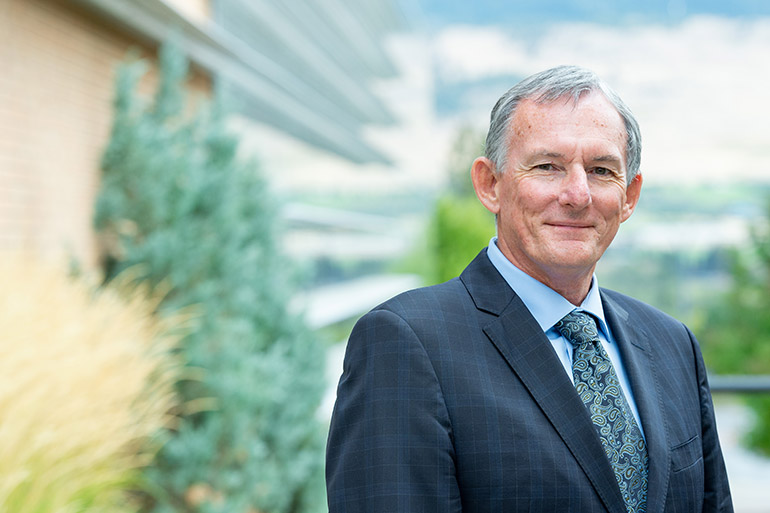 UBC recently established the role of Senior Advisor on Indigenous Affairs for its Okanagan campus, with Ian Cull, a founding member of the campus leadership team, named as the first person to hold the position.

In September of last year, UBC Okanagan signed a declaration in response to the Truth and Reconciliation Commission’s Calls to Action in which it committed to the creation of the new role as well as a number of other actions to advance meaningful support for reconciliation.

“Our campus has the unique distinction of being founded in partnership with local Indigenous peoples—the Syilx Okanagan Nation,” says Deborah Buszard, Deputy Vice-Chancellor and Principal of UBC Okanagan. “Ian will play a pivotal role in building consistent, open channels of communication between the university and Indigenous communities.”

She adds that Cull has a long history as a senior executive with the campus and fully expects that he’ll hit the ground running.

“Ian has served as Associate Vice-President, Students since UBC Okanagan opened in 2005 and has been instrumental in building outstanding partnerships and programs to support Indigenous culture, history, language, philosophy and knowledge on campus during the past 14 years,” says Buszard.

For his part, Cull says he’s looking forward to building upon the university’s strong foundation of partnership with the Okanagan Nation, other Indigenous communities and the Indigenous student population at UBCO.

“I’m proud of the work we’ve already done but my job now is to make sure our campus meets the obligations and responsibilities we have created for Indigenous communities, students, faculty and staff,” he says.

Cull is a member of the Dokis First Nation in Ontario.

According to UBC Okanagan’s Truth and Reconciliation Declaration, the university’s other commitments include developing an Indigenous culture orientation program for all faculty and staff, supporting the revitalization of Indigenous language fluency, advancing Indigenous teaching and research and expanding health and wellness services to better support Indigenous students.

Cull says these commitments will be his guiding principles as he begins to construct the programs and structures needed to make them a reality. But he admits there will be some challenges which will require the university to adopt new ways to meet the TRC Commitments and the obligations under the United Nation Declaration on the Rights of Indigenous Peoples.

“Indigenous culture orientation programs have already begun to take shape. Expanding the number of Indigenous faculty members will take longer to implement due to the critical lack of Indigenous professors in Canada,” he says. “Within that challenge, though, is an opportunity for a campus like UBCO. We have a very strong Indigenous undergraduate student population in all of our programs, and we will develop pathways for Indigenous students to graduate school, post-doctoral opportunities and into their first academic appointments.”

To be successful in his new role, Cull says the key will be building and nurturing relationships between the wider campus community, UBCO leadership and Okanagan Indigenous peoples.

“I am blessed to have a good relationship with the Okanagan Nation Alliance and other partners and I will continue to meet with Indigenous leaders across the region to ask for their input and support,” says Cull. “Strengthening the partnerships that founded this campus and advocating for the Indigenous communities that contribute so vitally to the UBCO identity is what will make this campus a leader of Indigenous excellence in education for years to come.”