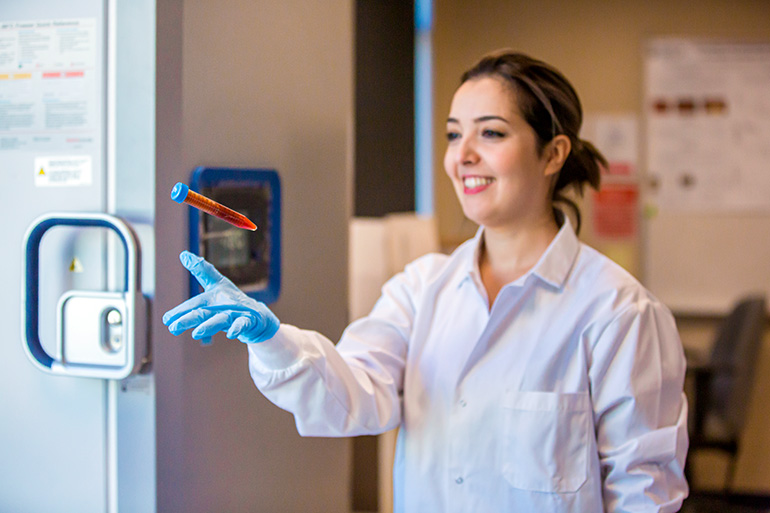 The researchers used a stream of electricity that acted like a magnet and separated protein from blood plasma. Plasma is the clear, liquid portion of blood that remains after red blood cells, white blood cells, platelets and other cellular components are removed.

“Human plasma proteins contain information on the occurrence and development of addiction and diseases,” says Sepideh Pakpour, assistant professor with UBCO’s School of Engineering, and one of the authors of the research.

Pakpour is using the proteins to predict opioid dependencies and addictions, but the findings could one day lead to medical diagnosis using the technology.

As plasma proteins are different densities, when separated the proteins levitate at different heights, and therefore become identifiable. An evaluation of these types of proteins and how they group together can paint a picture that identifies whether a patient has the possibility of getting a disease or becoming addicted to drugs like opioids.

“We compared the differences between healthy proteins and diseased proteins to set benchmarks,” says Pakpour. “With this information and the plasma levitation, we were able to accurately detect rare proteins that are only found in individuals with opioid addictions.”

According to Pakpour, the researchers are particularly excited about the possibility of developing a portable and accurate new diagnostic tool for health care practitioners.

“More investigation is required, but our findings are certainly a step forward towards an optical imaging disease detection tool,” she adds.

The five-minute test uses machine learning and predictive models. It may one day lead to tools that can not only diagnose diseases, but also help practitioners prescribe medications that won’t lead to drug dependencies.

The researchers are now evaluating other dependencies and diseases to establish roadmaps for detection.

The research is supported by internal grants from the department of anesthesiology at Brigham and Women’s Hospital at Harvard Medical School, and the Precision Health Program at Michigan State University. It was published in Advanced Healthcare Materials.