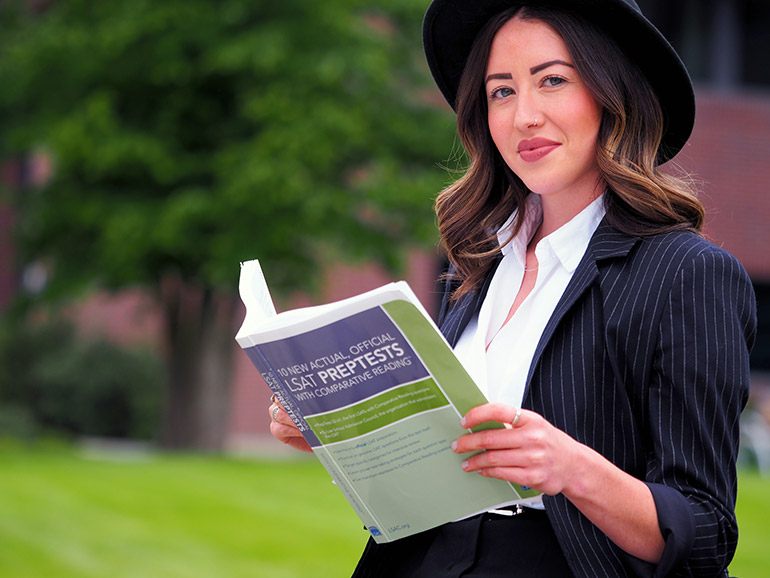 UBCO’s Dominica Patterson has won the Lieutenant Governor’s Medal for Inclusion, Democracy and Reconciliation. She is now preparing for law school.

Shortly after high school, Dominica Patterson boarded a plane to volunteer in Benin, West Africa. While she knew an adventure was waiting, she had no idea how that journey would light a spark that would eventually lead to law school.

Now, as she graduates from UBC Okanagan and studies for her Law School Admission Test (LSAT), Patterson has been named the winner of the Lieutenant Governor’s Medal for Inclusion, Democracy and Reconciliation. It’s an honour reserved for a student with a strong academic standing and who has also made a difference in this world.

Patterson admits she didn’t take high school seriously enough and had no idea what her future would bring. She signed up for the cultural exchange and left the rest up to fate.

“I assumed I was going on a big ‘save the planet’ project and I’d come back feeling like a great person,” she says. “To my benefit, it was not that type of program and it certainly opened my eyes. I quickly learned a lot about integrating into a new society, and the conflicts between foreign affairs, international aid and the lack of human rights many people struggle with.”

In Benin, she lived in a small rural village, worked on a community farm and also shadowed health care professionals in a nearby maternity clinic. The experience lit a fire in Patterson. She became passionate about global affairs and human rights. Back in Canada, after completing an associate degree in criminal justice she transferred to UBC Okanagan, bridging her credits towards a bachelor’s degree in international relations.

She quickly became involved in a number of organizations, most notably the non-profit group Radical Action with Migrants in Agriculture (RAMA).

“Working alongside human rights lawyers and executive organizers of the organization, I joined the fight to stand with temporary migrant workers in Canada against the structural racism, violence, isolation, discrimination and poor living and working conditions they often face while working here,” she explains.

She also began a fundraising campaign, helping support a person while he was waiting for the ruling of the Canadian BC Human Rights Tribunal. Not only did she start a Go Fund Me campaign, but she also created a business selling succulents in vintage teapots to raise money to support his family.

All this, while working on her degree. She admits there were some long nights poring over textbooks, and endless papers to write. But her work with RAMA inspired her to make a difference. The spark that had been lit in Benin, continued to burn.

“I took each moment in each course as it came along. Then I made the dean’s list and suddenly I knew I had the possibility of getting where I wanted to go. I knew there was no giving up.”

By then Patterson, and her passion for justice, was noticed by some of her professors.

“She has all of the hallmarks of being an outstanding scholar and someone who will be a practical change-maker around issues of inequality, inclusion and social justice,” says Economics, Philosophy and Political Science Department Head, Professor Helen Yanacopulos. “Teaching Dominica has been not only inspiring, but also intellectually stimulating and an absolute pleasure.”

“Dominica is an outstanding student and promises to contribute great things in the future. Her research on labour issues between Latin America and Canada has involved a deep reading of hemispheric labour conflict and activism with RAMA,” she adds. “Her family’s experience coming to Canada from Chile in the aftermath of Pinochet’s military coup has inspired her to consider the connections between everyday acts of exploitation and the foundations of citizenship and democracy.”

And the spark for human rights continues to burn. She takes her LSAT in July and has applied for law school, with a focus on international affairs. It’s daunting, she says, thinking of the years of course work ahead. But hearing about the Lieutenant Governor’s Silver Medal only sparks the flame for justice.

“At certain points, you find yourself on the floor, exhausted. You wonder how you’re going to get through this. But you can’t quit, because you want to make a difference,” she says. “To have this recognition is something I never expected. I can now look back at those moments when I was on my knees—done and ready to give up. I wish I could have told myself then it was going to be worth it. This is an amazing end to my time at UBCO and I couldn’t be more humbled or more grateful. I am truly thankful.”