Gut mucus. It may not be everyone’s favourite subject, but new research from UBC Okanagan has found it’s more complex and intimately linked to the body’s microbiota than previously thought.

Microbiota is a physiological force made up of microbes—mostly bacteria, fungi and viruses. While it often does good, like extracting energy from diet, warding off pathogens and promoting a healthy immune system, if it’s off-balance, it can also work against the body to promote illnesses like cancer, inflammation and obesity.

Working with colleagues at Oklahoma Medical Research Foundation, UBCO researchers recently published a study in Science examining this new-found relationship, why it matters, and how it may lead to less-invasive disease screening. 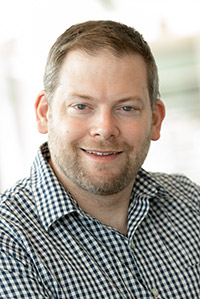 Kirk Bergstrom is an assistant professor of biology in the Irving K. Barber Faculty of Science and co-lead author of the study.

Let’s talk mucus. What are the misconceptions about it and how is it useful for our bodies?

I think people associate mucus with being sticky, gooey and kind of gross—but in the gut, it’s actually really important physiologically, and can protect from microbiota-driven diseases like cancer and inflammatory bowel disease.

There’s still a lot we don’t know about it, and that’s because it’s really complicated, decorated with thousands of sugar structures we call O-glycans that make up most of the molecule. It’s also hard to access so we could never get a lot of it to study.

Your study provides some new insight into how the mucus system works. Can you elaborate on this?

It was long-thought that mucus was continually produced along the entire length of the gut, especially in the colon, and that it stuck to the tissue to form a barrier to these microbes. It was thought to be immobile and have an overall similar chemical composition throughout.

Our study essentially showed the opposite. We found that the mucus does not attach to tissue, it attaches to the microbiota within the fecal mass, forming a seal around the community as it moves through the colon.  It’s also made up of two chemical sugar ‘flavours’—a dominant one is produced way up in the first part of the colon and the other, previously undiscovered kind, is formed in the lower colon.

What’s also really interesting is that the microbes themselves promote their own sealing by boosting production of the mucus in the first part of the colon. The sugars on this mucus then influence the types of microbes that thrive, the molecules they produce and where they position themselves in the gut.  All this, we believe, promotes their good functions, for example, by preventing unwanted inflammation.

How do your study results help advance knowledge in the field, and what impact could they have for the general public?

Discovering this connection between mucus, its sugars, and microbes really changes how we view our microbial friends and how they live, move and behave in the gut. This has implications for microbial transmission—once they are packaged up, how does this influence where they ultimately go? How do pathogens escape this sealing and cause disease?

Another really exciting opportunity is that since the mucus system is attached to the fecal mass, this opens the door to easier non-invasive ways of accessing mucus, and that’s going to lead to a better understanding of its chemistry and biology. In line with this, we envision new opportunities for non-invasive biomarker discovery for chronic diseases like inflammatory bowel disease and colon cancer, since changes in the mucus sugars can be early warning signs for disease, we can potentially easily screen from these markers without the need for uncomfortable biopsies and endoscopies.

Where do you go from here?

These were pre-clinical studies, meaning they were conducted using mouse models, which are essential biologic tools for health researchers. However, our next step is to take these results and replicate them in humans. Actually, our study already shows evidence that a similar mucus formation mechanism is present in humans, but we want to dig deeper to see if microbes influence this as we move forward.

We also want to begin using this new understanding and way of analyzing mucus in fecal samples to explore how things like diet, antibiotics, lifestyle or disease impact the structure and composition of the mucus.

Bergstrom would like to thank his mentor Lijun Xia, and colleagues Xindi Shan, Wesley Zandberg, Deanna Gibson and Sepideh Pakpour for their contributions to this research.