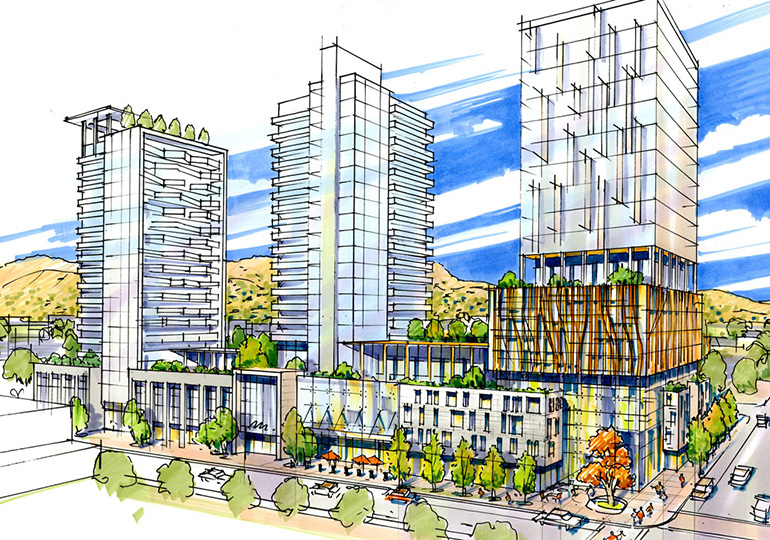 UBC is planning to use the Doyle Avenue location for academic and research uses and also create additional shared-use areas, office, residential and some amenity spaces.

A new public gallery, creative innovation spaces, a public engagement and learning suite and other community-accessible facilities are being considered for UBC Okanagan’s downtown Kelowna site.

The community is invited to a January 19 virtual open house to learn more about the building envisioned at 550 Doyle Avenue and discuss how new spaces there and future spaces may serve the shared interests of the region and the university.

“From the initial announcement of the Doyle Avenue site last summer, we have considered this initiative the next major step in the evolution of UBC in the Okanagan,” says Prof. Lesley Cormack, UBC deputy vice-chancellor and principal of the Okanagan campus. “An expanded downtown Kelowna presence will support UBC’s and the City of Kelowna’s strategic priorities, and strengthen our ability to engage with the people of our region in new ways.”

Cormack notes that, as a campus that emerged from community demand, UBCO’s faculty, staff and students have consistently worked with the region through initiatives such as the Southern Medical Program, the Memoranda of Understanding with the Okanagan Nation Alliance and the City of Kelowna, as well as Accelerate Okanagan. Additional collaboration exists with the wine sector throughout the BC Interior, the Healthy Cities initiative, Opera Kelowna, the Rotary Centre for the Arts and countless co-op placements and research projects.

“The 20-year ambition is to do more in partnership with the communities of our region,” she says. “To support that and accommodate significant growth in programs and enrolment, we’re adding space over the next decade. The downtown Kelowna site is an important part of that.”

The virtual open house will be held Tuesday, January 19, from 7 to 8 p.m. as a Zoom webinar. Hosted by Prof. Philip Barker, vice-principal of research and innovation, the evening will provide an overview of UBC’s vision for academic and community uses in the downtown site.

Associate Provost of Strategy Prof. Michael Burgess, will moderate a discussion panel and Q&A with the deans of several UBCO faculties. The discussion will focus on community interests in collaboratively developing programming in the various public engagement areas of the new building.

“While our immediate focus is on the downtown Kelowna location, the conversation with the community will be on-going,” says Burgess. “Our faculty and staff want to hear perspectives on how the people of this region would like to engage with UBC in future new spaces —either on campus or elsewhere in the community —and other ways to work together to enhance the community-university relationship in coming years.”

The open house webinar will be followed at 8:10 p.m. by a 45-minute discussion forum hosted by Burgess with breakout sessions for more fulsome conversations with members of the community. Anyone registering for the open house will also be invited to participate in the optional discussion forum.

For more information and to register, go to ok.ubc.ca/downtown.

Content type: Media Release
More content from: Deputy Vice-Chancellor and Principal (Office of the), Research and Innovation (Office of the Vice-Principal)