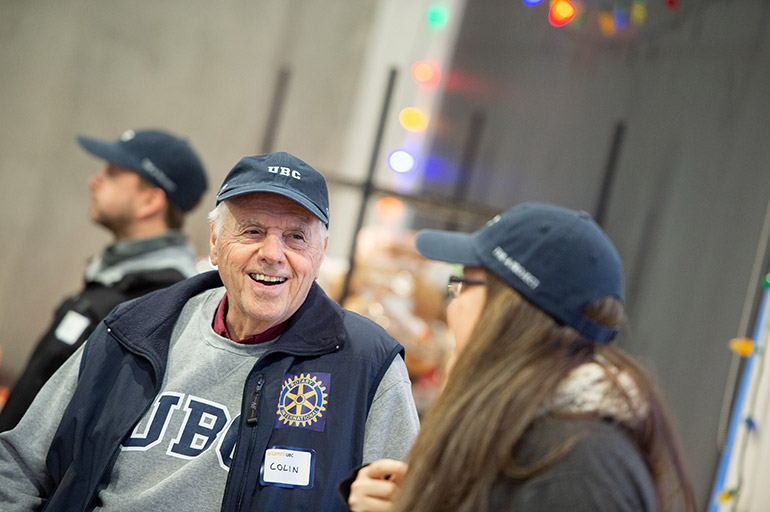 Colin Pritchard is the first recipient of the Deputy Vice-Chancellor and Principal’s Alumni Builder Award.

It’s no secret that UBC’s Okanagan campus continues to grow. To accommodate that growth, the campus has gone from 12 buildings in 2005 to more than 35 today with several currently under construction.

But there is a different type of building that has been taking place in the background, ever since the campus opened 15 years ago. UBC alumni, graduates from both the Vancouver and Okanagan campus, continue to make a difference in their communities, building deep bonds with service organizations, local clubs and charities.

That is the purpose of the Alumni Builder Awards, to recognize and bring light to the work of UBC’s exemplary alumni and the community impact they make, says Adrienne Nolan, executive director of development and alumni engagement.

UBC is recognizing several of those people through the Alumni Builder Awards. One of those builders is Okanagan-based UBC alumnus, Colin Pritchard—the inaugural recipient of the Deputy Vice-Chancellor and Principal’s award that was established as the campus celebrated its 15th anniversary.

“Without our alumni, UBC Okanagan wouldn’t be what it is today,” says Nolan. “And this year we are honoured to recognize Colin for his deep commitment to UBC Okanagan as an advocate, philanthropist and partnership builder.”

Pritchard received his Bachelor of Commerce degree in 1962 and his law degree from UBC in 1963. He was called to the bar in 1964 and developed a successful solicitors’ practice in addition to launching several agricultural ventures. A natural entrepreneur, in 1999, he and his wife Lois moved to Kelowna where he continued his work in real estate, mortgage financing and agriculture.

The Colin & Lois Pritchard Foundation was established in 2007 with the commitment to improving lives in the Okanagan Valley, BC and globally.

“Colin is a builder of the Okanagan community as well as our campus,” says Nolan. “Through his foundation, he has seeded many unique partnerships between UBC Okanagan and the broader community. He has also been a strong advocate of the campus and alumni volunteer.”

An area of particular interest for Pritchard has been health-care-related initiatives, including UBC Okanagan’s Southern Medical Program (SMP) where he has funded student trainees, clinical research, patient simulation technology and experiential learning.

As an early adopter of the SMP, Pritchard’s advocacy and support have served to build bridges between the university and key partners including Interior Health, Kelowna General Hospital Foundation and BC Cancer with a goal of improving health care in the region.

“Colin is a true alumni builder and community connector who has helped to lay a foundation of support for UBC’s Okanagan campus,” says Deputy Vice-Chancellor and Principal Lesley Cormack.

“He is the epitome of a leader, volunteer and philanthropist who has worked tirelessly to advocate for UBCO and his community,” she adds. “We are grateful for his contributions and for those of all of our alumni who share UBC’s vision of creating a better world through volunteer leadership, humanitarianism and philanthropy.”

To read the full list of recipients, visit: alumni.ubc.ca/alumni-builder-awards