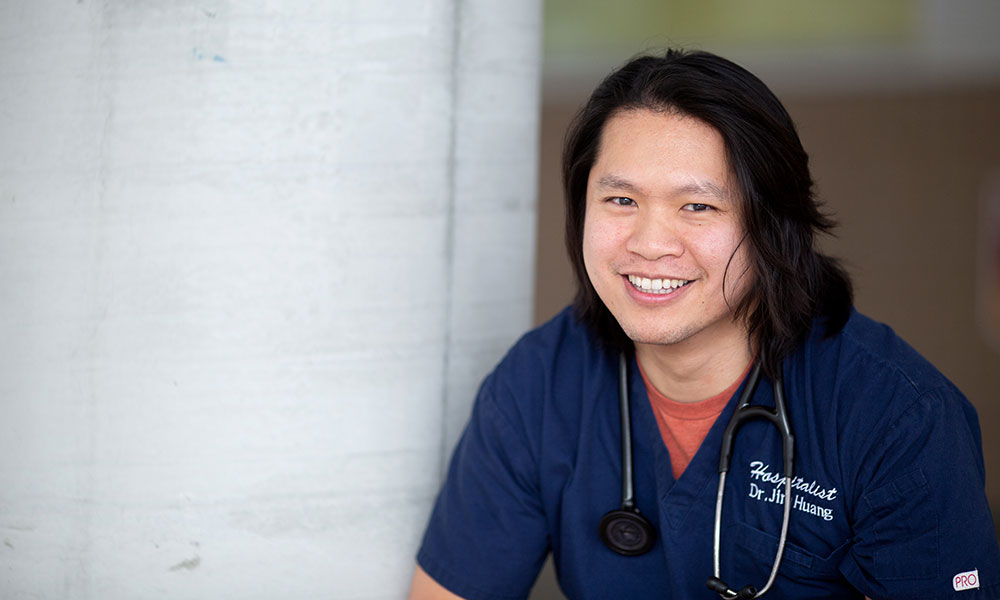 THE DAY STARTS AT 8 AM AS DR. JIM HUANG arrives for a morning shift amidst a flurry of activity. His day always begins with a meeting alongside a dozen or so fellow physicians at Kelowna General Hospital (KGH), as they make important decisions about patient care.

Huang is what is known as a hospitalist; think of it as a quarterback with a stethoscope.

“As a hospitalist, my role is that of the family physician, but in the hospital,” he explains. “I engage with, directly manage and treat patients as if they were my own in the community.”

That means facilitating care between patients and specialists in the hospital, as well as communicating with family physicians about their patients’ future follow-up once discharged from KGH.

Huang, who joined KGH in March 2019, deals with a wide scope of injuries and illnesses. He can list the type of patients he doesn’t treat on two fingers: pediatric and maternity cases.

Huang’s hospitalist group takes care of about 200 to 250 patients every day at the 711-bed hospital. Each morning he gathers with his fellow physicians in the hospitalists’ room where the team—already dressed in blue scrubs or white coats—await instructions from the week’s rotating ‘leader.’

“We try to divvy up and even out the workload for everyone, and sort out emergent medical needs right away,” explains Huang. “Optimally, we’d like to see 18 to 20 patients a day, as patients can be quite sick and require coordination with specialists.”

Like other KGH hospitalists, he’ll typically spend the entire week on one ward for better doctor-patient continuity of care.

It’s busy, intense work, but just what Huang trained for as part of the first class of MDs to graduate from the Southern Medical Program (SMP) based at UBC Okanagan. Established in 2011, the SMP became the fourth distributed site in the province for UBC’s Faculty of Medicine. Each year the SMP admits 32 new students as part of the provincial cohort of 288. The program has a particular interest in supporting northern and rural medicine and provides up to 10 spots annually for qualified applicants.

Huang and his classmates in that inaugural class were the first doctors to complete their medical training in the Interior Health region upon graduating in 2015. To date, the SMP has graduated 189 doctors who have entered careers in family medicine and the full range of medical specialties. 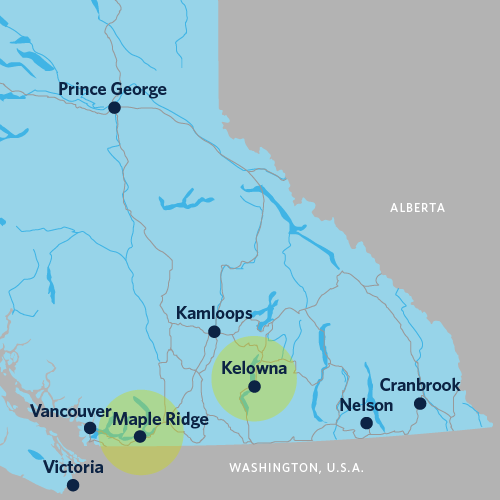 Huang was five when his family moved from Taiwan to Maple Ridge, BC. He was the first in his immediate family to go to university, completing a Bachelor of Science in molecular biology and biochemistry at Simon Fraser University.

Early in his university studies Huang had no idea what career he wanted to pursue, but decided to push towards medicine in his third year. “That’s quite late nowadays. You have to anticipate what’s required to get into medicine. You need a good combination of volunteer work, travel and life experiences,” he explains.

That meant he had catch-up work to do to bolster his application to medical school. “It’s super competitive to get into UBC,” says Huang. The SMP, he adds—with its small classes, training opportunities at 30 medical sites in the BC interior and a buffet of recreational attractions in the Kelowna region—is especially popular among med students vying for those 32 seats.

That posed a challenge for Huang, who had to work to pay for his education while at university. Before moving to Kelowna for the SMP, though, he managed to volunteer in Vancouver for an extended period at BC Children’s Hospital. At the hospital’s Sunny Hill Health Centre he worked with children with disabilities, helping in areas such as music and aquatic therapies.

Huang’s hard work ultimately paid off and he was accepted into UBC’s Faculty of Medicine with a catch: he was asked whether he wanted to be one of the first students in the brand-new SMP program. “It piqued an interest in me because, one, the location. And two, joining that first class and being part of building a program and helping it grow was appealing.” 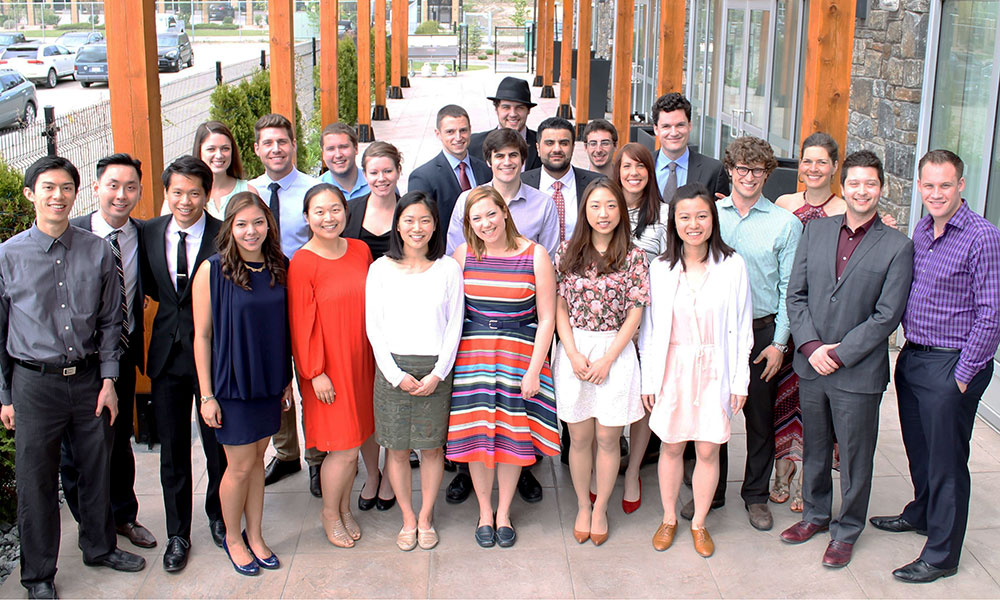 The first graduating class of the Southern Medical Program.

He began his medical studies in Kelowna in January 2012. By his second year of residency he was doing four-month stints in small rural locations like Grand Forks and Sechelt, learning about different specialties, how illnesses progress and functioning as a rookie family physician with his own roster of patients.

“When you’re left alone with your own sick patients for the first time, it’s very daunting,” Huang recalls. “Your heart jumps out of your chest. But you remember you’re well-trained and get through, dealing with the anxiety and emotions.”

Third-year students have the option to do an Integrated Community Clerkship, which Huang completed in nearby Vernon. “Going through the clerkship, I realized I wanted to do longitudinal care. I wanted to see patients over and over again during their experience in the community or hospital.” He adds that he enjoyed doing what he calls “lumps and bumps,” or minor surgeries like closing incisions, removing lesions and operating the camera during laparoscopic surgery.

Those are things students in medical school at larger universities get fewer opportunities to do. “Surgeons in those smaller communities are quite happy to have you help them,” says Huang. “We get to try everything. That’s why I feel smaller programs are so beneficial.” 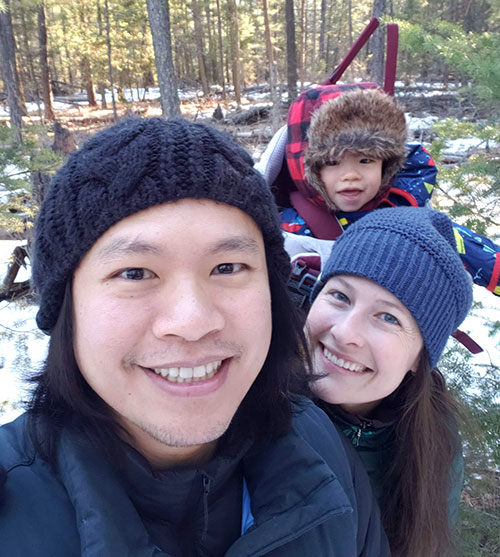 Jim with his wife and young son.

There were social benefits as well. In his fourth year during an elective at KGH, Huang met his wife, a pharmacist there, and they now have a young son. Always athletic, Huang—who played hockey before, during and after medical school—started an SMP golf tournament/dinner to better integrate the program and its students into Kelowna’s local and medical community.

That first year, the tournament raised $1,000 for the Kelowna Hospital Auxiliary. The now-annual event continues to raise tens of thousands of dollars for various charities and is organized by subsequent cohorts of SMP students. In recognition of his efforts supporting the inaugural golf tournament and SMP community, Huang was a recipient of the 2020-2021 UBC Alumni Builder Award.

One of the benefits of his role as a KGH hospitalist is that Huang often works with the doctors who once taught him in the SMP, which he relishes. As for his advice to students interested in attending the SMP, he says perseverance is key during the challenging program.

“Sometimes it’s hard to see the light at the end of the tunnel, but it’s there. Keep striving for excellence. And don’t forget to enjoy the friendships made while in the SMP. Life only gets busier.”