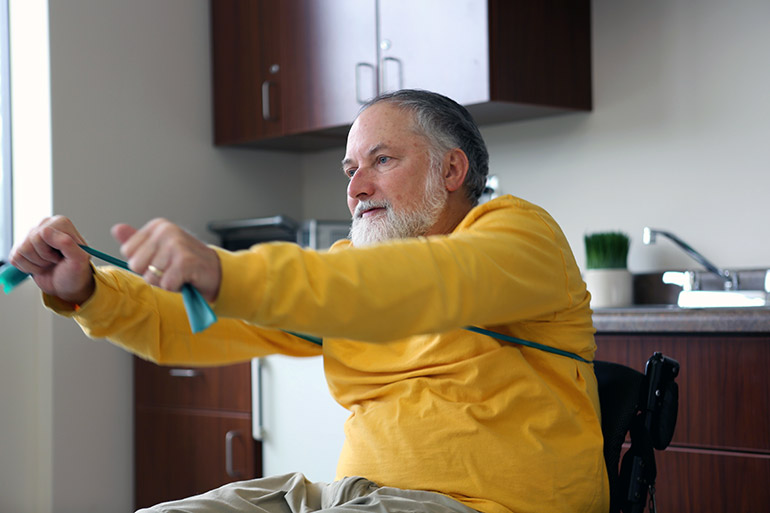 A UBC professor says the WHO exercise guidelines for people with disabilities miss the mark because they are not based on people who exercise mainly with their arms.

A UBC researcher is calling out the World Health Organization’s newly introduced activity and sedentary guidelines for people living with disabilities.

Kathleen Martin Ginis is director of the Centre for Chronic Disease Prevention and Management and a professor with UBC’s Department of Medicine and UBC Okanagan’s School of Health and Exercise Sciences. She holds the Reichwald Family Chair in Preventive Medicine, is a researcher with the International Collaboration on Repair Discoveries and works to help people living with spinal cord injury maintain a physically active lifestyle.

Martin Ginis discusses the WHO’s recently-announced global guidelines and how they missed the mark.

Much of your research focuses on physical activity guidelines for people living with disabilities. Can you explain why getting exercise is so important for this population?

People with disabilities are at just as much risk for inactivity-related chronic diseases (heart disease, Type 2 diabetes) as the general population, if not more so. We also know that physical activity is important for mental health. However, people with disabilities do far less activity than the general population because of the countless barriers to activity that they face in their daily lives.

You have recently written an article for the Journal of Physical Activity and Health questioning the World Health Organization’s new physical activity and sedentary behaviour guidelines for people living with disabilities. What did they get wrong?

I’ve got several concerns with these guidelines. My biggest is that the guidelines are based on scientific evidence derived from studies of people without disabilities. Admittedly, there are still relatively few good studies that have measured the role of physical activity in preventing chronic diseases and improving the health of people with diseases. But in the absence of those types of studies, the WHO decided to simply extrapolate the research evidence for the general population and apply it to people with disabilities.

Also, none of the guideline evidence is based on people who do their exercise with their arms (e.g., to push a wheelchair or use an arm-cycle). No studies have looked at the long-term effects of 150 to 300 minutes a week of arm exercise so we don’t know the benefits or the risks. Even for people with disabilities who would be expected to have the same physiological response to exercise as the general population (e.g., people with visual or cognitive impairments), we cannot simply assume that that amount of physical activity will mitigate the many other risks to well-being that people with disabilities constantly face, such as poverty, lack of access to health care and social isolation.

Your paper talks about the tremendous societal barriers to participation. Can you explain what some of these barriers might be?

There are so many! People with disabilities are often turned away from fitness centres and recreation facilities not just because those spaces are physically inaccessible, but because the people who work there have misconceptions or a complete lack of knowledge about how to support a person with a disability in a physical activity setting.

A lack of transportation is also a huge barrier—one of the most common. People with disabilities are mostly excluded from public health campaigns and advertisements promoting physical activity. There’s the old adage ‘’if you can see it, you can be it.” Unfortunately, people with disabilities don’t see themselves represented in physical activity settings as often as they should.

If people living with disabilities decide these guidelines are unrealistic and unachievable, do you think they will simply stop trying to be active?

Yes. That’s my concern. The studies that we do have on physical activity for people with disabilities suggest that they can achieve significant health and fitness benefits by doing much less than 150 minutes a week. For instance, people living with spinal cord injury can improve their cardiometabolic health by doing 90 minutes of moderate- to vigorous-intensity exercise each week.