Learning about Culture and Resiliency 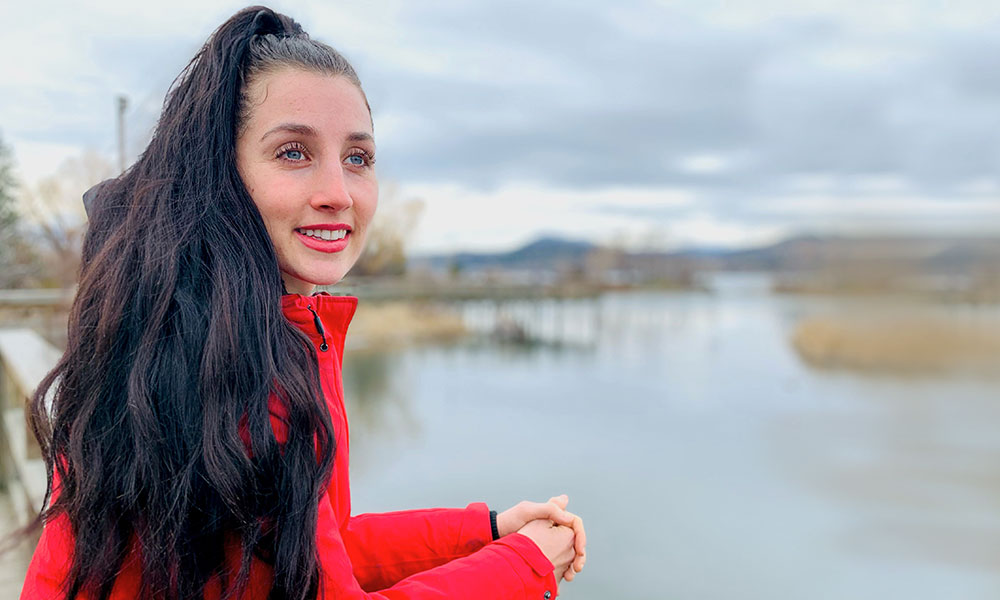 “My instructors were always so encouraging and really made me feel like I have something important to say…. The program and courses have trained my eyes to observe the world through a critical lens.”

WITH HER SIGHTS SET ON A CAREER AS A FRENCH TEACHER, Ayla De Grandpré started her undergraduate degree at UBC Okanagan in 2015. Four years later she earned her Bachelor of Arts in French and Spanish (now the Languages program), with a minor in geography. But once De Grandpré entered teaching school, she realized that she didn’t have the same drive to teach as her fellow students.

“I saw the people around me had so much passion for teaching, and I realized it wasn’t my calling.”

After spending one semester in the Bachelor of Education program, De Grandpré felt pulled back into the world of geography and sustainability, and decided to apply to UBC Okanagan’s Interdisciplinary Graduate Studies program. The program allows students to work closely with faculty across a diverse set of departments and disciplines; in De Grandpré’s case, she chose the sustainability theme.

“It was difficult letting go of the plan I had set out for myself,” she says.

De Grandpré also faced similar challenges when starting her undergrad, which made her more resolved for her master’s program. “As the first person in my family to attend university, I kept asking myself, ‘who do I think I am coming to university?’ I felt like it would be difficult to fit into the academic world, and I didn’t think I had anything important to say.”

But this all changed during her undergraduate degree. “My instructors were always so encouraging and really made me feel like I have something important to say. They helped me get over what I see now as my ‘imposter syndrome.’

Learning a new language is a door into another culture. For De Grandpré, some of her favourite classes were French grammar with Ramine Adl and Spanish culture with Dr. Diana Carter. “Ramine taught us how to break down a sentence and understand how language is constructed and how that can change the meaning of what you’re trying to say. And Diana was so passionate about her subject, it was hard not to become fascinated with history when we learned about the culture in Northern Spain,” De Grandpré remembers fondly.

UBC Okanagan’s Department of Languages and World Literature gave her “a solid foundation in language and non-Anglophone cultures,” which De Grandpré knows will be transferable to many career options.

“The program and courses have trained my eyes to observe the world through a critical lens. The things I learned in those classes have proven to be useful in life and my other academic pursuits.”

De Grandpré feels that while she was pragmatic coming into her undergrad degree — laying out a clear path she planned to follow — she now finds herself being curious and exploring career paths that she didn’t know existed.

“My supervisor is a wine geographer, and I would have laughed if someone told me that job existed before I came to university. I’ve learned it’s important to be opened to new opportunities.”

Currently, De Granpré is working with supervisor Dr. Donna Senese on her master’s thesis, which explores the resilience of local food production in the Okanagan using an adaptation pathways plan. That means quickly pivoting from previously-agreed upon decisions to better adapt to issues that arise in farming due to climate change and needs over time. One of her professors once commented that the adaptation pathways map is like an academic version of “choose your own adventure.”

“It’s almost like a train stop: you could choose to get off the train if the journey you started was no longer where you wanted to end up, and then you start a new journey.”

De Grandpré adds that food is fundamental to culture, reflecting our value systems, worldviews and preferences. However, food is also something that connects us all. While the type of food we eat and the way that we source, prepare and share it might differ, we are united by the universal need for food that makes us human.

“I realize that as someone studying food production, I have the power to either highlight these differences or create division and ‘otherness’,” she explains.

“In this line of work it’s important to acknowledge the differences and emphasize the commonalities,” De Grandpré adds. This will help create union and cooperation that can support better social cohesion and improve the resilience of our communities. Since every person has a relationship with food, all kinds of voices need to be heard in this kind of project.

De Grandpré hopes to show that building adaptation pathways enhance how local food production can adapt to shocks — like the COVID-19 pandemic — and stressors such as climate change, making it more resilient.

Being involved with various clubs and activities was also a huge asset to De Grandpré throughout her undergraduate degree.

At the end of her first year, she was given the opportunity to sit on the board of the ‘Club Français UBCO,’ and then served as the club’s president from her second year until she completed her degree. In addition to bringing together students and the French community to practice speaking in an immersive environment, the club also offers various events, from weekly lunches and study dates to skating and poutine nights.

“Some of my favourite memories were the potlucks. We would all bring home-cooked meals and sit down together and celebrate the holidays or the end of the year. It was an amazing community vibe.”

UBCO’s Aboriginal Programs and Services (APS) was also an important part of De Grandpré’s undergrad experience. “The people who work there are amazing,” she says. “They have a number of programs and opportunities for students including a great study space, which is quiet, inviting and cozy.”

She was also fortunate to work with them after graduation as a summer camp counsellor to help run youth summer campus. “As a student and former staff, the community at APS is like a family, and one of the most special places on campus.”

De Grandpré encourages students to be open-minded with their degrees and extra-curricular activities. “You never know what door will open for you when you try something new and different.”