Alumnus Cole Evans is focused on growing his business and finding his next ore deposit. 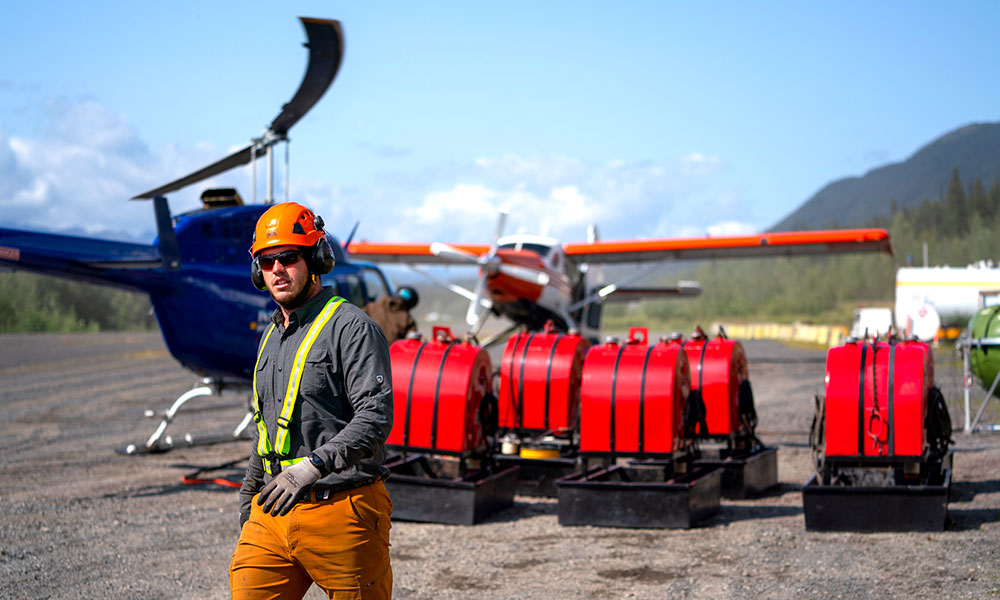 “My professors were obviously instrumental in my academic development, but it’s the extras I remember best. Whether it was volunteering, one-on-one mentorship or going to mining conventions, they taught me a lot about being a professional — and that’s not something you can learn in a lecture.”

“For years, I had my mind set on becoming a welder,” says Evans, an alumnus of the Irving K. Barber Faculty of Science’s Earth and Environmental Sciences program.

“I really enjoyed shop class in high school, and at the time there was a big attraction to the Canadian oil industry since it was doing quite well. So it seemed like a natural career choice.”

That is, until a conversation with his dad made him reconsider his plans.

“He basically told me to really consider what it is that I wanted to accomplish in life beyond a paycheque,” recalls Evans.

“Being an old-school Newfoundlander, he said it in a very colourful way, but that seemingly mundane conversation just clicked. I feel lucky my family never pressured me to do any one thing. The only thing that mattered was forward progression.”

Evans’ father encouraged him to look at other career options by researching program offerings at various universities. About a week later, the two drove more than 400 km from their Lower Mainland home to UBC Okanagan for a campus tour. “It all happened very quickly, but I immediately knew this was where I wanted to be,” he says.

And nine months later he was back. This time, to stay. 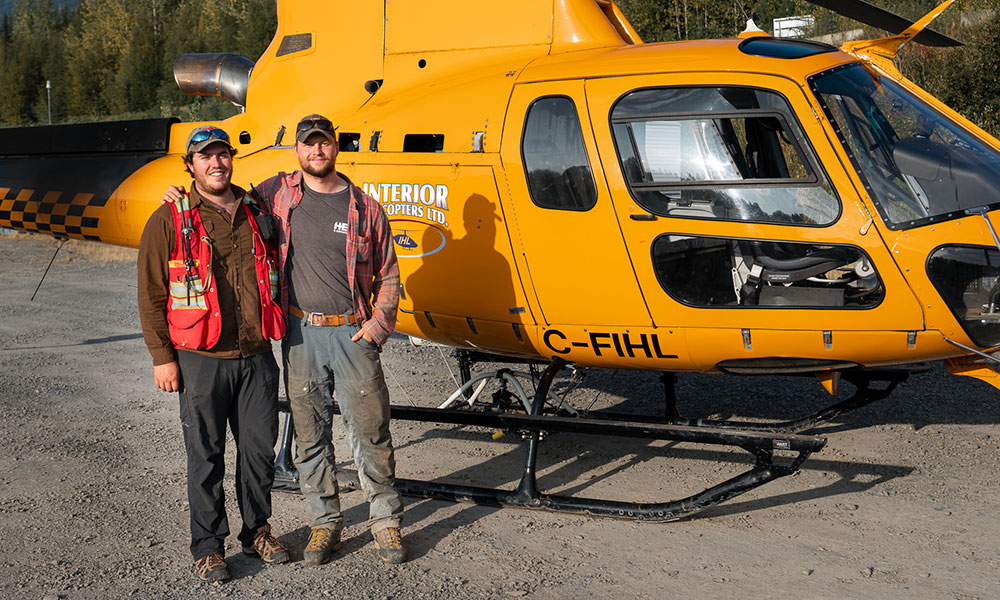 UBCO alumni Cole Evans and Dylan Hunko in front of the helicopter that will take them into the remote Canadian wilderness.

Evans enrolled in what he describes as a ‘grab-bag’ of courses in his first semester — earth science, geography, economics and French.

“My passion for the outdoors gave me a bit of direction, though looking back now I really had no idea what I was doing,” he admits.

“I would say to any new student, it’s ok to feel lost at times. The important part is the ability to get back on track. The diversity of experiences you get from university helps you with that.”

Evans was fortunate to have his ‘a-ha’ moment fairly early in his academic career.

“Taking those first-year earth and environmental sciences courses made me realize I had found my calling,” he explains. “I felt passionate about the coursework and got really excited — but then I encountered my first major roadblock.”

Because Evans had originally planned for a career in the trades, he took few science courses in high school, and not the prerequisites needed to enrol in his desired university courses.

Fortunately, he was able to work with professors to develop a plan to gain entry, which ultimately led him to excel in courses like biology and chemistry — despite having no background in science. 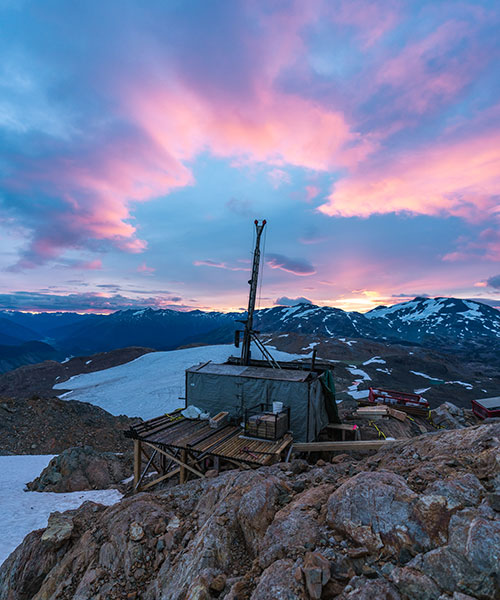 A diamond drill rig assembled by helicopter sits on a wooden drill pad at an elevation of 6,000 feet in northwestern British Columbia.

“I had a different path to becoming a science major than most, but it taught me a valuable life lesson: the power of determination. Whether it’s school, business or research — if you put your mind to it there’s no limit to what you can achieve. It sounds easy, but it takes practice and discipline.”

Then thriving in the earth and environmental sciences program, Evans was unaware that a new roadblock was on the horizon: narcolepsy.

The rare — and in his case, undiagnosed disorder — affected his cognitive function and caused him to struggle internally during his third and fourth years, as he tried to figure out what was going on with his body while completing his degree.

“It’s a lot more than just feeling tired. Unchecked, it’s exhaustion to the point of physical collapse,” he explains. “People often joke around about it, but it’s not funny. People fall asleep when they’re driving, cooking and doing all sorts of things — there are real consequences.”

When Evans was finally diagnosed he felt somewhat relieved, since it put him in a position where he could do something about it.

“Those were a rough couple of years, but figuring out what was going on changed everything for me — I could finally start learning how to manage the disorder and stop it from controlling my life.”

He adds that he tried not to let his condition get in the way of having a productive final year, becoming president of the earth and environmental sciences course union and also completing an honours thesis in a technology called hyperspectral analysis. The exploration technique uses short-wave infrared and physical near-infrared sections of the electromagnetic spectrum to look for ore deposits.

“I really enjoyed doing my honours thesis, and my whole experience at UBCO,” recalls Evans.

“My professors were obviously instrumental in my academic development, but it’s the extras I remember best. Whether it was volunteering, one-on-one mentorship or going to mining conventions, they taught me a lot about being a professional — and that’s not something you can learn in a lecture.”

Evans accepted a position at a mining and mineral exploration company immediately after finishing his coursework. “I was a thousand kilometres away at 6,000 feet on a mountain peak before my graduation ceremony happened,” he recalls. But his entrepreneurial spirit also led him to co-found a private company called HEG & Associates Exploration Services with fellow UBCO alumnus Dylan Hunko. 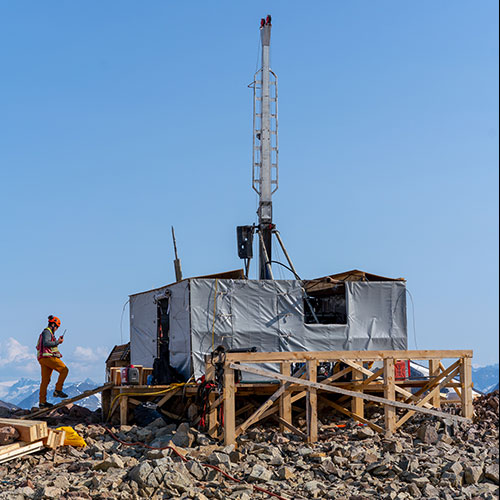 Cole Evans communicates by VHF radio as he inspects a diamond drill on a mountain top in BC’s famed Golden Triangle.

“Our focus is on mineral exploration and resource delineation,” Evans explains. “We provide all kinds of services, but one of our focuses is using our research techniques as geologists to find where the next big gold, copper, silver and other metal deposits will be. Base and precious metals are vital resources in our modern world. As we move towards a greener, electrified economy, the demand is growing drastically.”

The Kelowna-based company has seen consistent growth over the years, with Evans now serving as president and CEO.

“We’ve been very fortunate with the success of our business thus far. We recently made a big move by taking over a company called Enduro Metals, which I believe makes me the youngest CEO of a publicly-traded company in Canada, so that’s been really exciting and brought a new set of challenges.”

Enduro Metals owns the mineral rights to 650-square kilometres of land in northwestern BC commonly referred to as the golden triangle — an area Evans’ team is currently exploring.

His work has also attracted attention from some big names in the mining industry, including Canadian businessman Rob McEwen.

“I liken him to being the Bill Gates of the mining industry,” explains Evans. “He’s the founder of Goldcorp, which is by far the most successful and innovative gold mining company in Canadian history, but he’s also a philanthropist who has donated to health care and education. I feel very fortunate to have developed a relationship with someone who knows the industry inside out.” 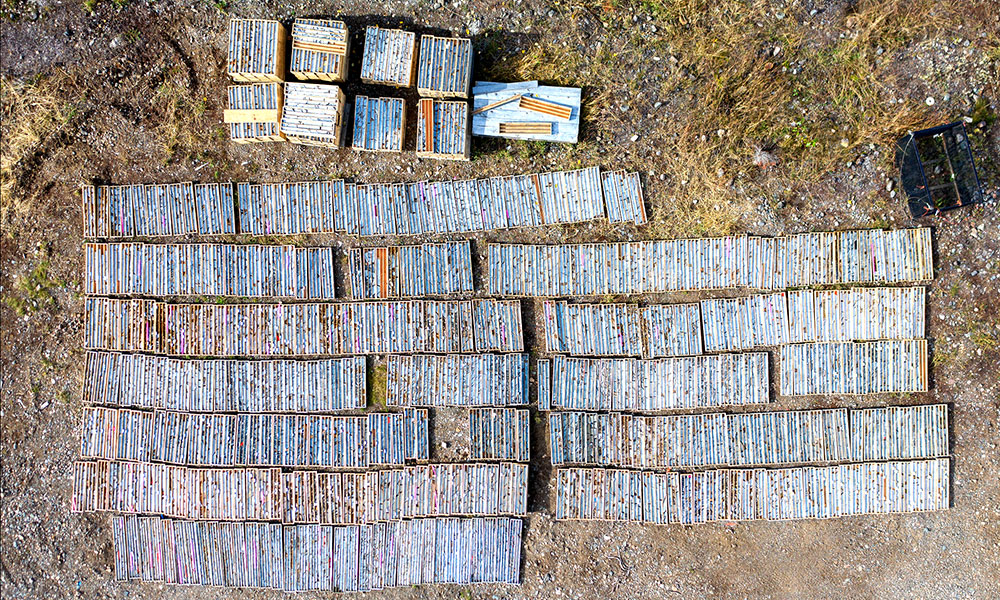 Drill core mineralized with gold and copper are laid out on the ground for a “quick log” prior to being processed.

PUTTING DOWN ROOTS IN THE OKANAGAN

It’s been eight years since Evans made the move to Kelowna — and he’s never looked back.

“Originally, I came to Kelowna because I wanted to go to UBCO, but also because it was something new, something different — without being too far from home,” he says. “Now, I’ve come to appreciate the laid-back nature of people in the Okanagan. The lifestyle here is hard to beat. There’s something to do in every season — fly fishing, hunting, skiing or cycling among many others. The outdoors is so accessible, yet you are still close to a major city centre.”

Though Evans admits he needs to work on maintaining a better work-life balance, he has noticed a different work philosophy here than in the Lower Mainland.

“I’ve noticed a different type of work culture — you don’t feel like you’re stuck in the rat race of a bigger city. Here, work and personal time are equally valued, which I actually think increases productivity. I feel grateful to live in a community with those values.”

Evans has undoubtedly done well in the years since graduation, but says he’s more determined than ever to keep going.

“There’s a lot I want to accomplish in the future on both personal and professional levels,” he says. “I have a passion for aviation that I previously put on hold because of my disorder. I’d like to return to that one day, and I’d like to continue growing our business. I think the biggest reward of financial success is what you can accomplish through philanthropy.”

“I by no means consider myself a philanthropist,” he continues. “But I get inspired by people who have been successful for many years and choose to use that success to be part of social change.”

Thinking about social change often brings back memories for Evans of a trip he made to Kenya in 2011. Travelling through a northern area called Wajir near the Somali border, he witnessed scenes he’ll never forget. 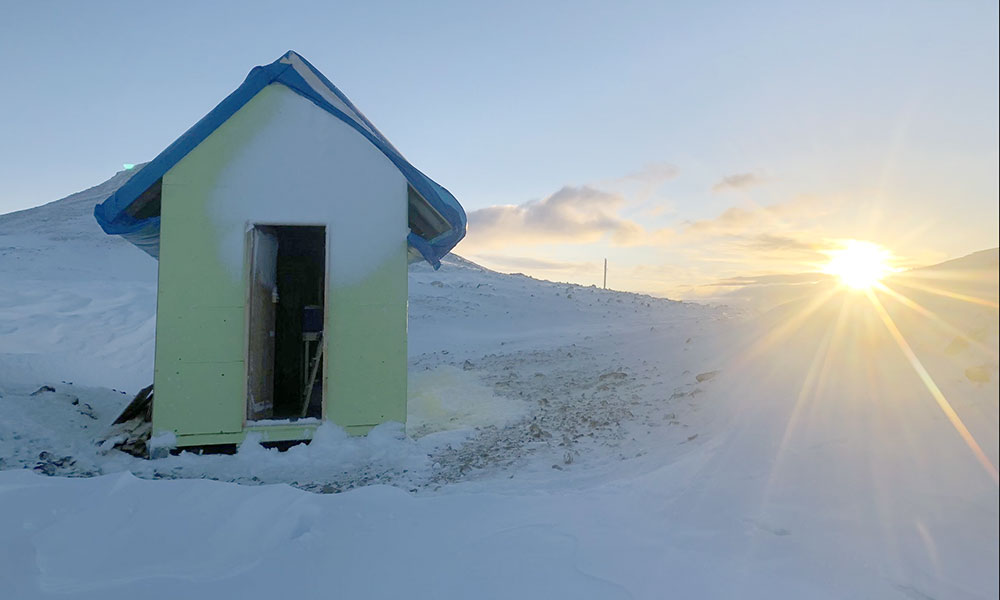 The sun sets on a makeshift survival shelter at 7,000 feet near the Andrei Ice field in northwestern British Columbia.

“I remember seeing hordes of people flooding over the border — refugees — trying to escape drought and Al-Shabaab. Those images are engrained in my mind.”

Evans specifically recalls an encounter while driving through an abandoned desert area, where he saw a young boy poke his head out from the side of the road and start sprinting towards his truck.

“He and his family had been resting in a dirt hole on the side of the road, and the boy didn’t have any clothes,” explains Evans. “He didn’t speak English, but he kept repeating the word ‘pen’.”

Evans and his family gave the boy all the pens they had, and were later informed by their guide that having a pen was the minimum requirement for being able to attend school in Kenya at that time.

“That boy had nothing. His family had nothing. These were some of the most destitute and vulnerable people on this planet, and all they wanted from me was a pen. It was a powerful moment that underscored the importance of education and philanthropy, and how fortunate we are in Canada,” says Evans.

“For me, the possibility of being able to contribute to social change in a big way is what motivates me, more than anything, to work harder.”