Scientists say current wildfire situation is beyond a ‘crisis’ 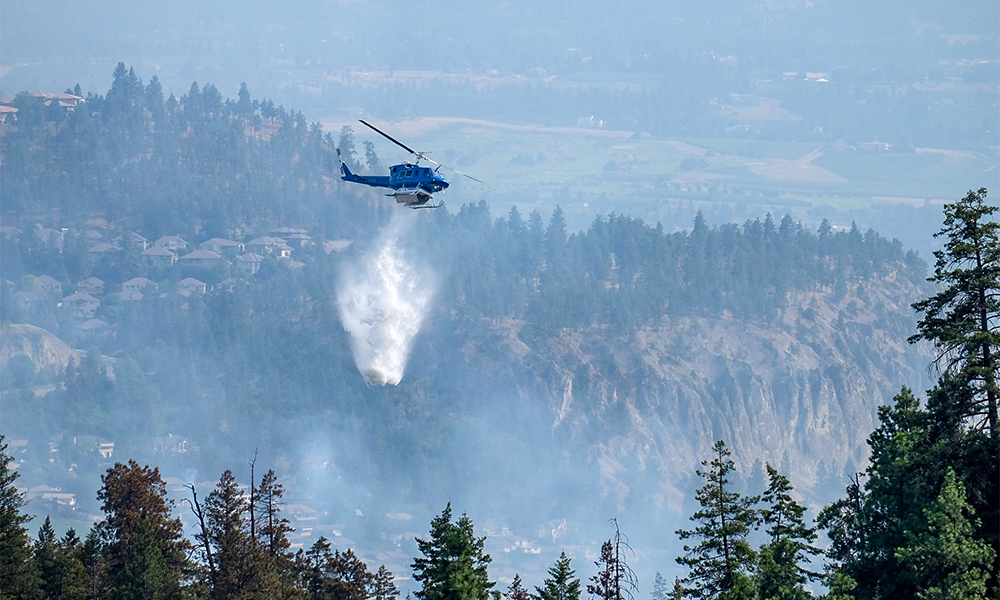 A helicopter attacks a wildfire from above.

A team of scientists, including UBC Okanagan’s Dr. Mathieu Bourbonnais, have prepared a white paper detailing a game plan for western Canada to reduce wildfire risk and prevent “crisis seasons” like the one British Columbia is currently facing.

Applying their decades of experience in wildland fire management, fire ecology, climate change research and on-the-ground operations, the paper’s authors describe in detail the crisis western Canada is facing and suggest a course of action to reduce the adverse consequences of future wildfires.

Dr. Bourbonnais is an Assistant Professor in the Irving K. Barber Faculty of Science’s Department of Earth, Environment and Geographic Sciences. Before becoming a faculty member, Dr. Bourbonnais spent years working as a wildland firefighter and now, more than ever, he and his collaborators from the Indigenous community, academia, government and industry, are worried about forest conditions and say we need to do far more to proactively reduce wildfire risk.

Beyond the immediate threat to homes and people, what is the bigger issue that needs to be addressed when it comes to wildfires?

The numbers are staggering. We’re potentially talking about hundreds to thousands of premature deaths due to smoke impacts on human health, tens to hundreds of millions of tonnes of greenhouse gas emissions further complicating efforts to mitigate climate change — not to mention the billions of dollars in increased suppression and indirect fire costs negatively impacting the social, cultural and political fabric of society.

By 2050, years like 2017–2018 in BC and 2016–2019 in Alberta will be commonplace. Already, we are seeing evidence of another record-setting year in BC, with numerous fires and evacuation orders resulting in a state of emergency. Climate change and fire science experts insist there is a very limited window — the next decade — in which society can positively alter the crisis.

Is our current approach to wildfires sustainable?

No. The shockingly high costs of recent fire events and seasons will be completely unsustainable if allowed to continue unabated. Recent catastrophic wildfires, including the 2016 Fort McMurray wildfire, the 2017–2018 fire seasons in B.C. and the 2019 fire season in Alberta, accounted for more than $10 billion in direct losses, billions of dollars in fire suppression costs and tens of billions of dollars more in indirect costs in each of these events. We haven’t even fully considered the loss of the entire town of Lytton this summer and it is difficult to quantify the adverse social, cultural, physical and mental health impacts due to the loss of life, and evacuations resulting from fire and widespread smoke.

How did we get here — is it just about climate change?

Climate change plays a big role, but it is much more complicated. Although images from Lytton, Fort McMurray, California and Australia remind us of the potentially devastating effects of wildfire on people and infrastructure, we forget that wildfires are an important part of our ecosystems and how we manage landscapes directly contributes to the current wildfire crisis. But society has never been more vulnerable. More people are living in fire-prone areas and a changing climate is lengthening the fire season and creating more extreme weather conditions.

In the past, much of the “wildfire problem” was pegged on either wildland fire management agencies or the forest sector. This perspective has led to a decades-long discussion on how to maximize fire protection by integrating fire and forest management activities. This paradigm is simplistic and insufficient, because wildfires affect so many facets of our society and environment including health, the economy, biodiversity, ecosystem function and more. Wildland fire management must engage additional proponents, including Indigenous peoples, industry and communities, to help people learn to live with the realities of landscapes and ecological systems that include wildfires but, over time, work to reduce their more catastrophic effects.

What needs to be done? How can we protect the forests, citizens and communities of western Canada and beyond?

The challenge lies in creating a realistic plan we can readily implement while acknowledging existing interests and resources. Can we imagine an effective wildfire reduction strategy surviving both the political and market-based changes witnessed in North America during the past four years, along with the financial realities of burgeoning government debt? Yes, by integrating adaptability and defining milestones to serve as indicators for both progress and course correction, we have a chance for meaningful change.

The answer is not another Royal Commission or task force. We know enough about the actions that should be taken, especially in recognizing the climate change emergency facing western North America.

Knowledge gaps and uncertainty surrounding wildfire mitigation are real but should not impede action. This includes, but is not limited to, the effects of forest thinning, prescribed burning, tree planting, rehabilitation and restoration work, as well as developing strategies to deal with the immense quantities of fuel that need to be removed from our forests in ecologically sustainable ways.

To solve this crisis, we need a new kind of strategic plan — one that spans multiple decades and is national and international in scope yet meaningfully involves local and provincial/state governments. It is critical that these efforts receive nonpartisan political support, are founded on principles of ecosystem function and resilience, and are inclusive and adaptable. A plan also needs to be responsive to the needs of business and government while creating a social licence to operate that includes input from the general public, Indigenous peoples, and a wide range of NGOs.