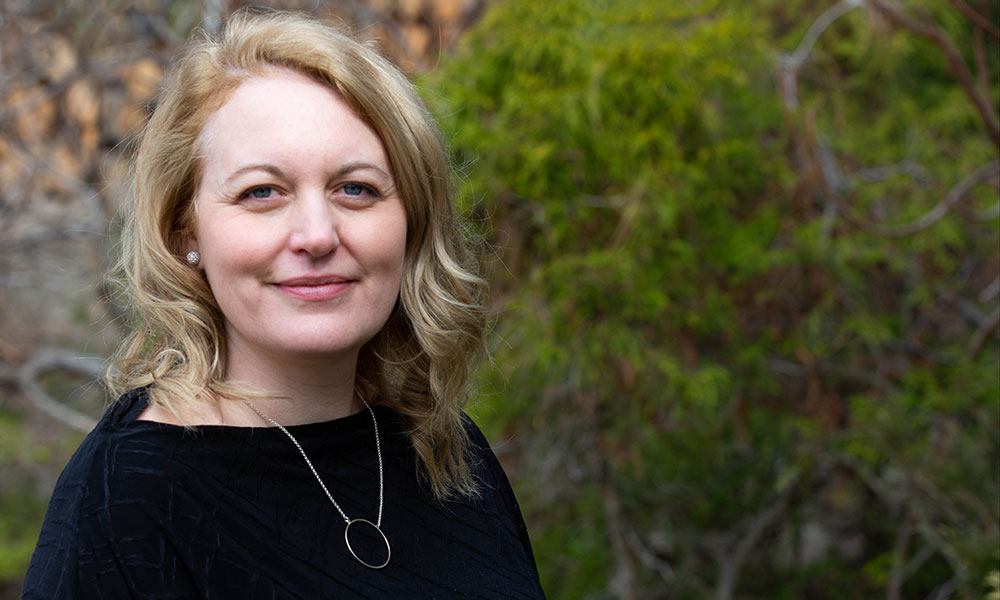 “I became completely mesmerized by the Internet at a very young age before too many people had it in their homes. By the late 1990s, I spent my whole student loan on a new computer and was teaching students in my dorm how to use the Internet.”

GROWING UP, MEGAN SMITH WAS ALWAYS CURIOUS about computers, art and technology. She was first introduced to home computers as a teenager.

“We had some computer science in high school, but most of the fun stuff was learned at home. I was influenced by the people around me. My parents gave me my first job formatting floppy disks.

“I became completely mesmerized by the Internet at a very young age before too many people had it in their homes. By the late 1990s I spent my whole student loan on a new computer and was teaching students in my dorm how to use the Internet.”

Smith says she’s always followed a path of blending creativity and science in her research.

“I’ve long been fascinated with the Internet and digital culture. Every time I make a new piece of work, my medium changes. I adapt to the message or the story I want to tell based on the data or technology I need to use to tell that story.”

Smith’s research projects use identity, mapping and geolocation to work towards understanding space within the digital domain. As a new media artist, she bridges physical computing within virtual and augmented reality environments. Her practice-based research blends with critical design methods to effectively build immersive environments.

“Where the Internet of Things can seem dry, I try to animate that with stories in new ways,” she says. “Much of my work references surveillance culture and I’m working to understand how those technologies track people and their identities.”

One of Smith’s previous projects, Pst! microCONTROL, involved an installation of five small clocks with digital faces that pulled data directly from Twitter, providing a window into a geo-located public space. By narrating social activity, the piece told a global story by placing various cities side-by-side.

Riding through Walls was an 18-month durational performance in the form of a cross-Canada cycle through Google Street View on a networked vintage ‘air wing’ stationary bike. This enabled Smith to propel herself visually through the map at the same speed as her pedalling. The project received some attention from the Royal Canadian Mounted Police (RCMP) and as a result, Smith is now involved in designing new tools for a virtual reality (VR) simulation training space for the RCMP, to be completed in 2023. 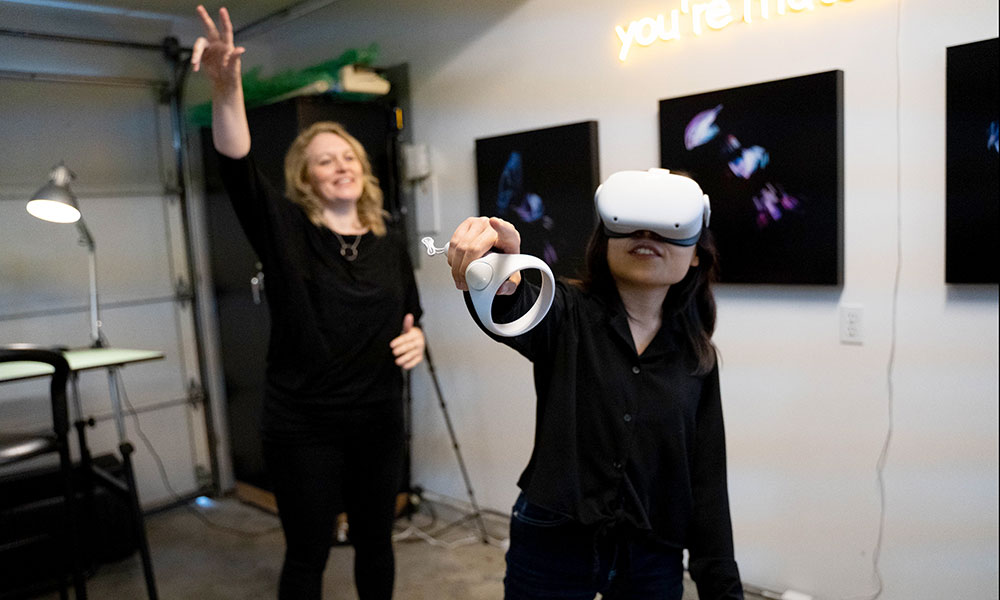 Dr. Megan Smith and PhD student Gao Yujie test out their research in the virtual environment.

“They saw me as a creative professor who was using new technologies in innovative ways and who understood virtual and augmented reality, so they asked me to work with them.”

The overarching goal of the project is to build good tools to help innovate police training in Canada. It’s one thing to play a game with a controller at home as a civilian, Smith explains, but it’s another to be a police officer using the controller for training. Smith is currently working on the development of a user study that will test the difference in learning outcomes between a controller used as a pistol in VR training against a custom-designed simulated service weapon applied in the same exercise. The research aims to reduce the risk of negative training that could be picked up from using a standard remote control.

Smith adds that when pistols are fired they can miss the target — stress or poor marksmanship can affect the outcome — but the hope is that VR can be a good tool for improving training.

“The RCMP, of course, take this outcome seriously, so being part of a team that’s building innovative solutions designed to reduce risk and improve training drive me to work on this,” Smith says.

Revamping the Bachelor of Media Studies

Smith was drawn to UBC Okanagan by the idea of having an expanded research team, and the blend of digital visual arts and media studies programs in the Faculty of Creative and Critical Studies. She was previously part of developing the creative technologies program at the University of Regina, and the idea of developing the media studies program at UBCO seemed like the next logical step.

While the Bachelor of Media Studies (BMS) has been offered at the campus for the last four years, a few years ago it became clear that the program needed some revisions to meet the needs of students. Over the last year, Smith has been working on those changes, creating a clear computational arts program that offers a streamlined set of computer science and critical thinking skills aimed at code-based art and design in creative arts and digital humanities.

Smith notes that while there were no programs like media studies when she went to university, a need for this area was beginning to arise through a shift in society. There is a demand for teaching across a blended space of art and design, science, computer coding, engineering, and creative thinking to ensure careers for future industries.

“All of the tools that we’re accessing through our phones and screens, all of this needs creative thinkers who are able to do a bit of all of these things.

“We’re going through a massive change as we enter the next evolution of the Internet, and people working in this area will be equipped to make those changes. They’re being trained to acquire hands-on skills. But more than that, they understand the cycle of innovation that’s taken place over the last 30 years.” 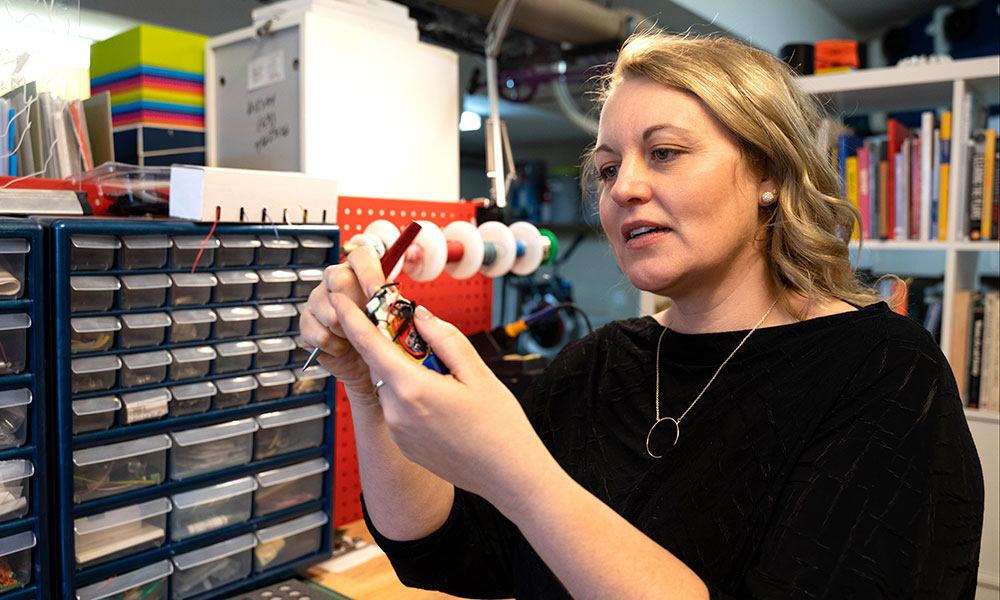 Smith adds that programs like the BMS provide students with the ability to understand critical choices that have been made in the past, including citizen journalism and algorithmic and design choices by major companies — and the consequent effects on mainstream media. These topics are taught to students in combination with how to access readily available electronics, how to build them into smart systems, how to use code picked up through courses, and how to visualize and draw from imagination.

“On top of that they know how to work on a team,” Smith says. “They may not be experts in all areas but they can work across areas and usually pick up a passion in one area.”

Some students end up focusing on creative coding; others are better at physical computing, graphic design, marketing or project management.

“We need that combination of people in order to make the projects of the future succeed. It’s impossible to make these complex projects on your own — you need a team. Each person can understand a little bit of what the others are doing and then bring their expertise to the table.

“That’s how I was brought into amazing research projects, and that’s what I hope for when I teach students,” says Smith. “In teaching our students, from the beginning I create projects that encourage collaboration, so that by the end they can work together to build spectacular projects. By the time students leave university, they are ready to launch into their own space, to join or form teams and they know how to thrive within that dynamic environment.”