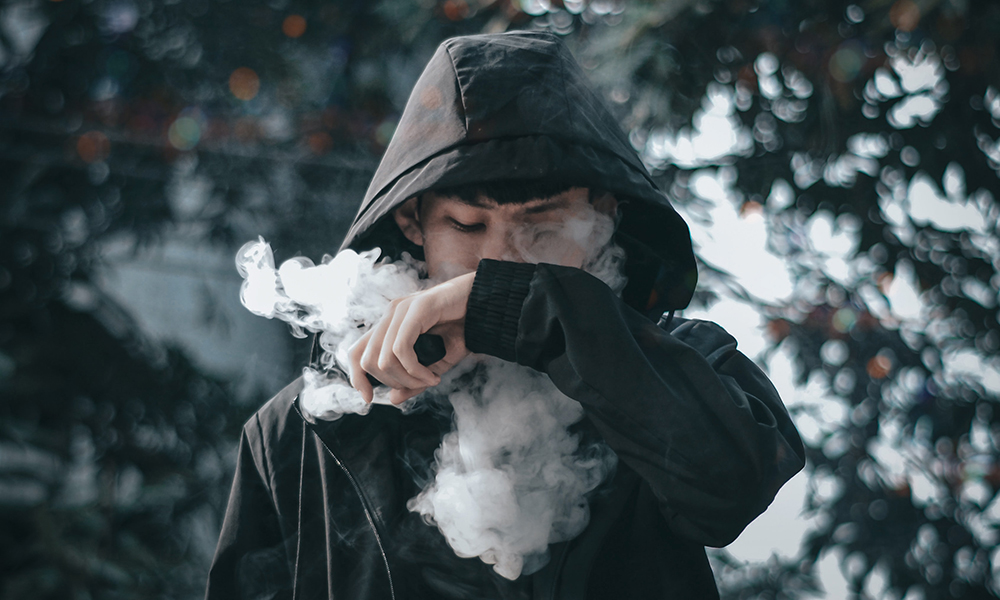 Over 60 per cent of youth who vape reported trying to quit in the last year. Photo by Toan Nguyen on Unsplash

The study, published in this week’s issue of the Journal of Medical Internet Research, has implications for young Canadians who are currently hooked and want to stop using e-cigarettes, commonly called vapes.

“Vaping has become a popular global phenomenon, with more than 40 million users worldwide,” says Dr. Laura Struik, assistant professor in the UBCO School of Nursing and lead researcher of the study. “Despite this growth in popularity, many current vapers admit they want to quit, particularly young Canadians. In fact, over 60 per cent of youth—ages 15 to 19—who vape reported trying to quit in the last year. Our study is the first to use the social media forum, Reddit, to find out how they are breaking this habit and how they can be best supported.”

According to Health Canada, vaping is the act of inhaling and exhaling an aerosol produced by a vaping product, such as an electronic cigarette. Unlike cigarette smoking, vaping doesn’t require burning, rather, the device heats a liquid into a vapour, which then turns into an aerosol.

Dr. Struik and Youjin Yang, a recent UBCO Bachelor of Science in Nursing graduate, analyzed 1,228 public posts from 318 users on a “quit vaping” Reddit forum. The information was categorized into quitting method, reasons for quitting, and barriers and facilitators to quitting.

“We chose social media to gather our data because this is where individuals, especially young people, the largest users of e-cigarettes, are sharing their experiences, including those about health,” says Dr. Struik.

The research showed that negative health experiences were the number one reason these individuals chose to quit. Symptoms such as shortness of breath, chest pain, wheezing and poor sleep were the complaints listed, which concerns Dr. Struik.

“This is very different from the number one reason that smokers want to quit smoking, which is future health concerns,” she says. “We need to pay attention to these early adverse health effects. I’m particularly concerned by the impact of vaping on young and healthy lungs. That e-cigarette users are experiencing such intense negative health effects from vaping relatively early indicates that something different is going on biologically compared to smoking.”

Dr. Struik also notes that the users reported intense withdrawal symptoms and dependency on nicotine as the top barrier to quitting.

“This is not surprising given that the most popular e-cigarettes deliver very high concentrations of nicotine,” she says. “In addition, previous studies suggest that the developing brain, such as that seen in youth and young adults, is vulnerable to long-term nicotine addiction. This makes quitting harder for this population.”

For those who pursued quitting, the study found that more than 65 per cent of them said they preferred a gradual reduction approach. This involved tapering the nicotine concentration, followed by using different nicotine replacement therapies, such as patches and gum. To help with this, individuals used distraction techniques like exercising, to keep themselves busy and get a dopamine release—the “feel good” neurotransmitter in the brain—from something other than vaping.

It was also noteworthy that e-cigarette users were vocal about the need for self-grace and a positive self-concept as they engaged in the quitting process.

“Health promotion efforts should encompass messaging that does not shame those who vape or are struggling to quit; instead, we need to build each other up and support each other’s efforts in reducing exposure to health risks, like vaping.”

She suggests that online interventions may be particularly useful for this group, given that most of them are young and embrace digital platforms. “We have an opportunity here to help support them.”

“Our research findings show that vaping and vapers are different than those who smoke tobacco. Therefore, the cessation approaches should also be unique.”