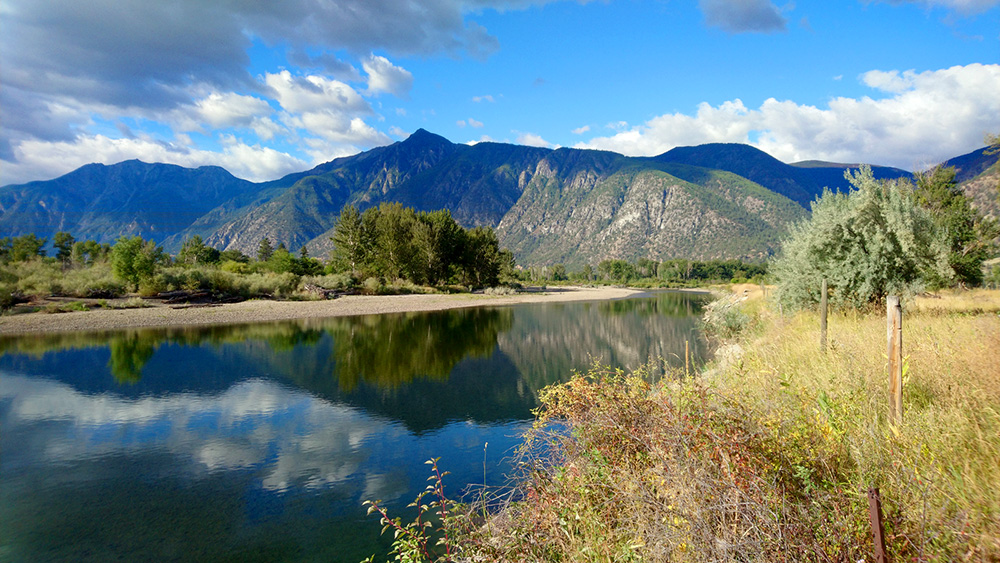 The Similkameen River is one of eight regions that are part of the Canadian portion of the Columbia River Basin. Photo credit Cindy Boehm.

As the world’s leaders convened at COP26 to discuss actions to address climate change, plans were finalized in the Okanagan for the annual One River, Ethics Matter (OREM) conference taking place later this month.

The 2021 One River Ethics Matter conference is hosted by the Okanagan Nation Alliance and UBC Okanagan. This will be the eighth annual event and it will focus on the Indigenous-led work of the Syilx nation with kł cp̓əlk̓ stim̓—restoring ntytyix (salmon)—to the Okanagan and Upper Columbia Rivers.

The main objective of the two-day conference is to discuss the review process now underway to modernize the 57-year old Columbia River Treaty. Participants include traditional ecological knowledge keepers, environmental experts, along with academic and religious scholars from both sides of the 49th parallel.

Dr. Jeannette Armstrong, a Syilx knowledge keeper and UBCO associate professor who was recently appointed a Royal Society of Canada Scholar, will be one of several speakers at the event. Other leaders and panel experts include Grand Chief ʔaʔsiwɬ Stewart Phillip, who is president of the Union of British Columbia Indian Chiefs, Okanagan Indian Band Chief Byron Louis, University of Idaho Professor Emerita Barbara Cosens, along with Indigenous youth experts, historians, biologists, policy officials and representatives from the Roman Catholic Church.

Pauline Terbasket, executive director of the Okanagan Nation Alliance, has been participating in the OREM conference since the first session in Spokane in 2014.

“These gatherings have been opportunities to feel the reality and impacts of colonization upon Indigenous Nations and the devastating impacts of the Columbia River Treaty. They also provide an opportunity to share stories that are familiar to all tribes along the Columbia River,” says Terbasket. “As the Indigenous people of the Columbia Basin, we are all salmon people, tied to the river for sustenance and to carry our responsibilities to care for all our lands, resources and peoples as we have since time immemorial.”

The OREM conference series is an ethics consultation process for improving the quality of ethical decision-making for the Columbia River.

“The lasting and far-reaching effects of both colonization and climate change have taken a toll on the Columbia River basin, as with other natural environments around the world,” says Cormack. “Now, more than ever, it is essential that we come together to make thoughtful, ethical decisions that will support healthy and sustainable environments as well as truth and reconciliation between Indigenous and non-Indigenous peoples.”

Salmon have been blocked from reaching Canada’s Upper Columbia River after the Grand Coulee Dam was built in Washington State some 80 years ago. In 1964, Canada and the United States implemented the Columbia River Treaty to develop the hydroelectric potential of the Columbia River Basin and to manage flood risk.

Grounded in respectful dialogue the conference is a part of the Ethics and Treaty Project, which aims to increase public understanding of the Columbia River Treaty and provide an interdisciplinary forum to discuss shared stewardship of the river in the face of climate change. Alternating between the United States and Canada, the conference is jointly hosted by an Indigenous sovereign nation and an academic institution.

The 2021 OREM conference is free and open to the public. More information can be found at: riverethics.org

People can register for the event at: ubc.zoom.us/webinar/register/WN_aKQEqnHxQ3y7L0TIMqb52A