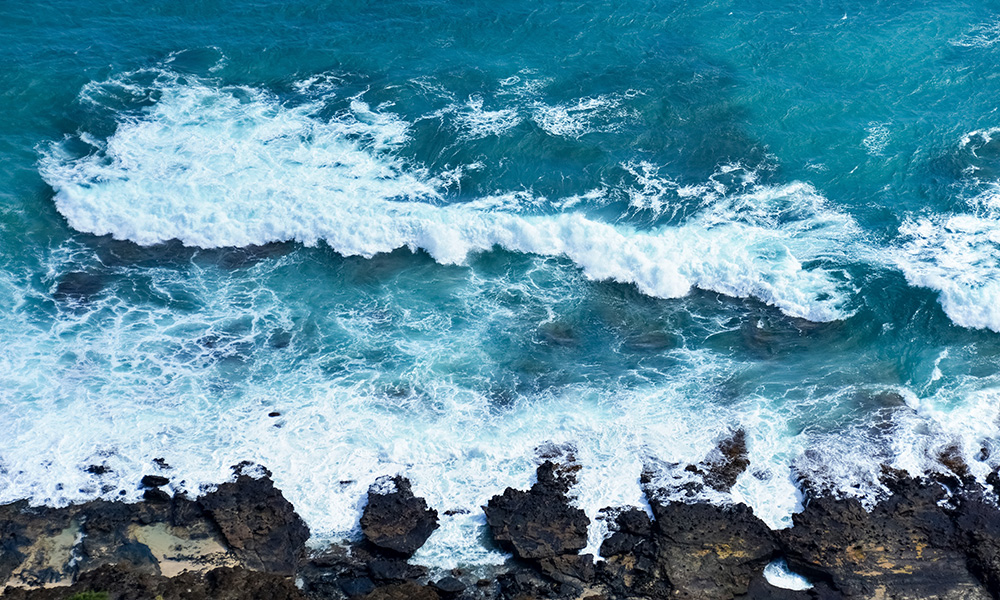 Young volcanic rocks, made of fragmental ash deposits, are pounded by the sea along Oahu’s coastline. Photo by Jeremy Bezanger on Unsplash

UBC Okanagan’s Dr. John Greenough, professor of earth, environmental and geographic sciences in the Irving K. Barber Faculty of Science, is testament to that. Dr. Greenough has spent his career studying the Earth’s mantle—that mysterious layer of solid to semi-molten rock that spans below the crust to the liquid outer core.

Almost 85 per cent of the Earth’s volume is made up of its mantle. Understanding the evolution and functionality of the mantle is key to understanding other important processes, like crust development and plate tectonics.

Yet, very little is known of the mantle’s history and chemical composition.

Dr. Greenough has made it his lifelong mission to dig into this mystery. Despite numerous setbacks, he has found some answers. Those results, recently published in Communications, Earth and Environment, provide new insight into the mantle’s mysterious past.

Can you explain your area of research?

My research focuses on the Earth’s mantle, its composition and evolution. More specifically, I study the chemical variation seen in volcanic rocks and use it to determine how the rocks formed by melting in the mantle.

You have been working on this research paper for 20 years. —How did this project begin, and how did it progress over the years?

I’ve actually been pursuing this line of research since receiving my doctorate in 1984. A major problem is that we have minimal information about when variations in the composition of the mantle were formed, so we know little about how the mantle evolved.

In 2000, a colleague and I wanted to change that and decided to try and find answers by collecting samples of the mantle and dating them using zircon. Zircon is a common mineral in the Earth’s crust but it is rarely found in mantle rocks.

Zircons contain small amounts of uranium, which is radioactive as it decays it turns into lead. By measuring the amount of lead produced, we can determine an age.

But you faced setbacks. Did you find zircon in the samples collected?

Unfortunately, not at first. We tested our samples, which were chunks of rock brought up by an explosive lava flow from Earth’s mantle beneath Hawaii. But we couldn’t find any zircon in slices through the samples.

However, we knew if they were in there, they were rare. The zircons would be only slightly larger than dust fragments, so we knew our chances of slicing through a rock and intersecting them were low.

We knew we needed to grind the rock into tiny pieces to concentrate the zircon—like panning for gold. But we also had to minimize the possibility of contaminant zircon from other sources, because it is a fine dust particle and there are traces of zircons everywhere. There was technology that existed, but we couldn’t access it, so the project stalled.

In 2014, I learned a colleague at another institution had access to this technology and I contacted him. Luckily, he volunteered to essentially blow up our samples, making it more likely to find zircons if they existed.

And eureka! You found the zircon

Finally, yes. We found zircon grains in two of seven samples. They had complicated growth histories and the outer part was 14 million years old—much older than the island of Oahu where the samples came from. Parts inside our zircon grains were 40 to 100 million years old, while age modelling indicated the zircons first formed one to two billion years ago.

What did you learn from these samples?

Our discovery created another mystery for us.

What is so fascinating, is that the ages for the zircons suggested the crystals had come from below the continents. But once zircon is exposed to 1,000 degrees Celsius, it becomes an open chemical system that cannot be dated.

This means, for our zircon grains to have preserved their dates, they must have been at temperatures below 1,000 degrees for all these years. Considering the temperature of the lava flow that brought them up was about 1,300 degrees, and the part of the mantle that convects is also about 1,300 degrees—how could this be possible?

We propose the zircons may have been preserved in a cool part of the mantle called the sub-continental lithospheric mantle. More recently, thick sections of this sub-continental mantle were removed by mantle convection from below a continent.

The thick blocks shielded the zircons from the high temperatures in the partially molten and flowing mantle which delivered the rocks to Oahu. The rocks may have come from below Papa New Guinea where a tectonic plate is plunging back into the mantle and heading toward Hawaii.

Alternatively, they may be fragments of sub-continental lithospheric mantle stranded in the convecting mantle when the supercontinent Pangea broke up. Either way, it provides us with greater insight into the mantle’s age and its origin of chemical variability.

How do your results move this area of research forward?

We need to fully understand how the mantle’s chemical variability has evolved and our results serve as a foundation that future researchers can build on.

The atmosphere, along with our oceans, crust, mantle and core, form interacting parts of the chemical system we call Earth. An understanding of the mantle is essential for unravelling how humans can impact these large geochemical systems. This research will hopefully lead to a fuller understanding of how our planet, our home, evolved.