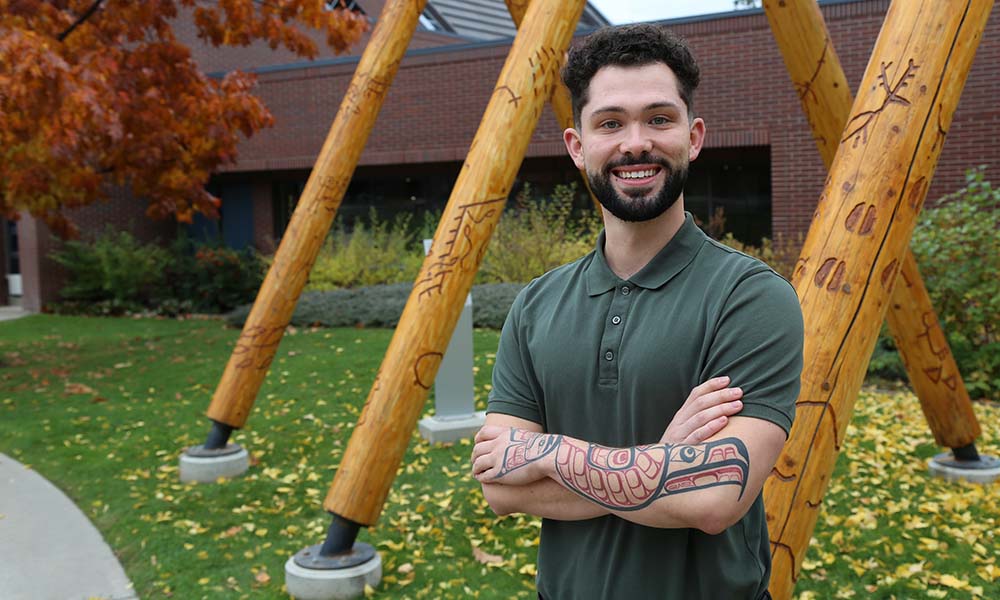 “My goal is to provide the same support and assistance I received during my degree to current UBCO students as they navigate their own academic journey.”

AUSTIN BASSO WEARS HIS HEART ON HIS SLEEVE. The tattoo on his arm of his clan crest, the Gispudwada (blackfish)—or killer whale—is a homage to his ancestral territory, the Gitga’at First Nation of Hartley Bay, British Columbia. For Basso, it is also a symbol of his cultural reconnection and understanding.

“Growing up as an off-reserve community member, it took a long time for me to reconnect with my First Nation,” says Basso, who was born and raised in the small town of Oliver, on unceded Syilx territory.

The tattoo was part of his coming home—a process that started for Basso when he took his first Indigenous studies class at UBC Okanagan.

“The class sparked something in me,” explains Basso of the moment his journey home began.

A home away from home

For Basso, friends and family are everything, so the decision to attend UBC Okanagan was an easy one. A stone’s throw from his hometown in the southern Okanagan valley, the campus offered Basso the opportunity to pursue his interest in health and wellness through the human kinetics program while at the same time remaining connected to his roots.

When Basso began his studies, he was immediately drawn to the campus’ Indigenous Programs and Services Centre. The inclusive environment played an important role during Basso’s formative years at UBC Okanagan.

“Growing up displaced from my ancestral territory, I faced the challenge of grasping the importance of community and kinship,” explains Basso. “The centre was a place where Indigenous students could congregate and feel safe, appreciated, encouraged and heard.”

Basso says that the centre helped him feel comfortable in an institutional setting and ultimately boosted his confidence to take on additional challenges during his studies, like an Indigenous Research Mentorship. The program provides Indigenous undergraduate students the opportunity to gain practical research and laboratory experience while working with a UBCO faculty member or postdoctoral fellow.

“Growing up displaced from my ancestral territory, I faced the challenge of grasping the importance of community and kinship. The [Indigenous Programs and Services] centre was a place where Indigenous students could congregate and feel safe, appreciated, encouraged and heard.”

For Basso, the research opportunity served as the next step forward as he worked alongside Dr. Donna Kurtz on health promotion initiatives for both urban and rural Indigenous communities in BC’s Interior region.

While Dr. Kurtz’s collaborative research is ongoing, the two years Basso spent working on the project exposed him to Indigenous-led research methodologies as well as traditional ways and practices of Indigenous cultures. Through it all, Basso discovered his passion for working in the field of Indigenous health and wellness.

“I realized the potential I have to make a difference,” he says.

And so, Basso followed his heart.

Following his graduation, Basso successfully applied for the Indigenous Youth Internship Program and served as a policy analyst with the BC Ministry of Health’s Office of Indigenous Health.

As part of his internship, Basso worked directly with Indigenous communities. Although Basso’s connection to his own territory wasn’t always clear, he knew he was being called home. So he reached out to Hartley Bay’s director of health to further discuss the opportunity of serving the community.

Six months later, he stepped onto his ancestral territory for the first time in his life. “It was one of the most surreal experiences I have ever had,” Basso explains. “For it to actually happen was emotionally overwhelming, and the energy I felt as I stepped off the floatplane was so powerful. It was like I could sense my late grandfather welcoming me home.” 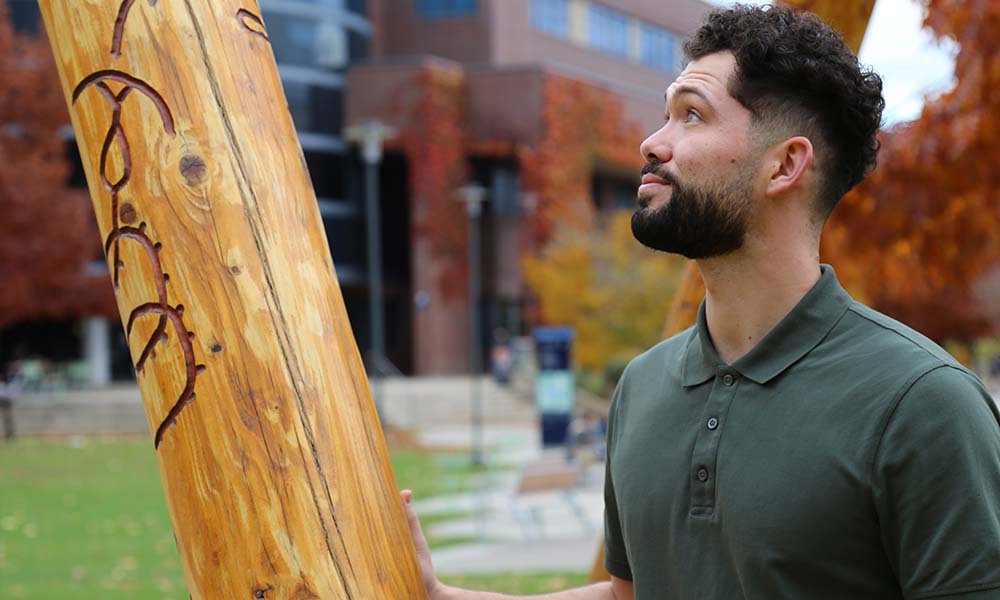 Austin Basso alongside the Okanagan Story Poles on UBCO’s campus.

Basso worked alongside community members to deliver a six-week healthy living program for families, on top of other work-related duties at the Gitga’at Health Clinic like organizing a land-based youth camping retreat to a traditional harvesting site. Yet for Basso, his education had just begun.

“Working closely with my First Nation’s community to actively participate in our hunting and gathering, oral histories, language, protocols and ceremony fosters my sense of cultural identity and strengthens my journey of reconnection,” he says.

For Basso, when the opportunity to re-join UBC Okanagan as a student advisor in Indigenous Programs and Services presented itself, it was an easy choice. Now he wants to make the same difference for students by using his passion to give back to the campus community and his on-reserve community.

“I know I can use my voice within the institutional setting to be a strong advocate for Indigenous peoples, and to actively help create space for the next generation as they prepare to enter the same realm.”

Basso hopes to further realize this potential next year when he begins his journey in the Master of Science in Indigenous population health at Simon Fraser University.

“I hope that by working and learning together we can narrow the gaps of health and wellness that are experienced by our Indigenous communities and for those living on reserve,” says Basso of the work he will undertake as part of his studies and thesis research.

When thinking about his journey, Basso points to the words of his traditional knowledge keeper, Pearl Innes, which will forever shape his path: “We’re just trying to remember what our hearts already know.”