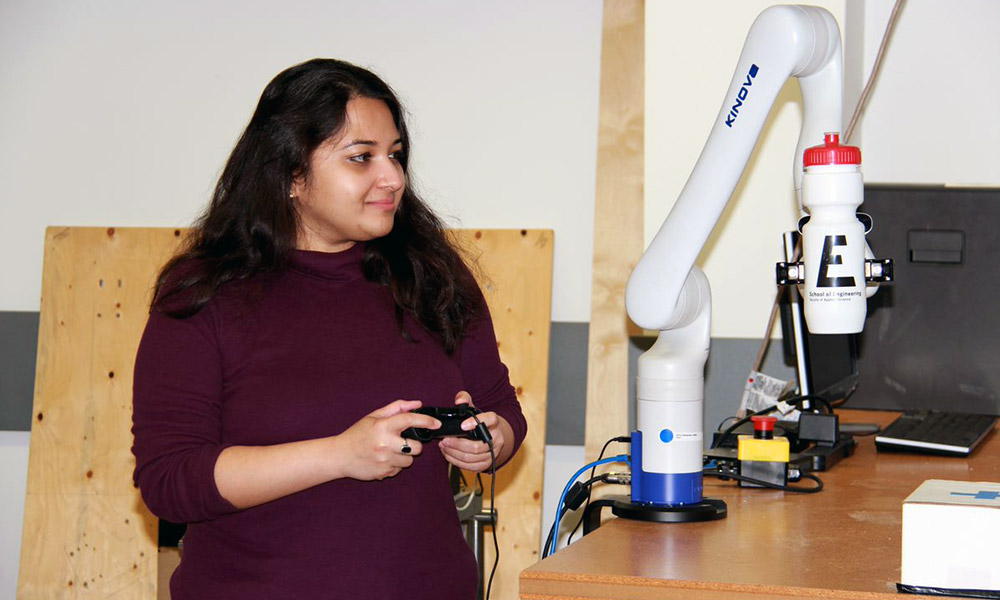 UBCO doctoral student Debasmita Mukherjee, with the School of Engineering’s Advanced Control and Intelligent Systems Laboratory, is looking at ways to program robots so they can work safely alongside people.

Using autonomous vehicle guidelines, a team of UBC Okanagan researchers has developed a system to improve interactions between people and robots.

The way people interact safely with robots is at the forefront of today’s research related to automation and manufacturing, explains Debasmita Mukherjee, a doctoral student and lead author of a recently published study. She is one of several researchers at UBC’s Advanced Control and Intelligent Systems Laboratory who are working to develop systems that allow humans and robots to interact safely and efficiently.

“It is incredibly important for robots in manufacturing to perform their tasks in the safest and most efficient method possible,” Mukherjee says. “In order to make these automated machines as smart as possible, we are developing systems that perceive their environments and carry out tasks in a similar manner as their human partners.”

To develop such systems, researchers are using artificial intelligence and machine learning to help guide the machines. Mechanical Engineering Professor Homayoun Najjaran says the process is not as straightforward as it seems.

“Robots don’t think or feel, so they need systems that capture and analyze their environment enabling them to respond,” says Dr. Najjaran. “Often those responses need to be in hundredths of a second to ensure the safety of humans in their vicinity.”

Traditionally, industrial robots have been fixed and programmed to operate at high speeds and perform tasks such as welding, painting, assembly, pick-and-place and material handling. Social robots, on the other hand, are built to assist people in service industries. They are typically mobile, lightweight and programmed to work in a variety of environments.

The field of research taking place at UBCO’s School of Engineering is called human-robot collaboration (HRC), and it is gaining steam in manufacturing. Owing to the complementary nature of robot and human capabilities, there is an increased interest towards a shared workspace for people and robots to work together collaboratively, forming the motivation behind HRC.

HRC in an industrial setting blends the requirements of both domains in building intelligent, mobile robots that are aware of their surroundings and the human partner. The researchers are working with several organizations around the world to assimilate autonomous systems and machine learning technologies into HRC-focused robotics.

However, Mukherjee says adapting to uncertainty within an industrial setting is the biggest hurdle. Using autonomous vehicle guidelines, she introduces some rules for functionality between humans and robots in industrial settings and tests their effectiveness.

“Increasing automation levels is standardized and accepted by the automotive industry, but other industrial settings, while relatively static, don’t have the same standards,” she says. “In the future, not only will industrial automated systems continue to use sensors to enable perception and communication similar to human capabilities, but they will also be adapting and communicating in real-time with their surroundings.”

Mukherjee says this means robots will be able to predict what humans and other robots will do and can then respond accordingly.

As a next step, the researchers are turning their attention to developing systems that can enable robots to function and respond outside of a prescribed environment like a factory. The endgame is to achieve the seamless team dynamics and communication fluency of an all-human team while using robots.

“In an ‘open-world,’ robots will need to deal with unexpected variables like people, structures, machines, and wildlife,” she adds. “We need to ensure they can do this correctly, efficiently and safely.”

The research was published recently in Robotics and Computer-Integrated Manufacturing.