Donned in blue and gold, our student athletes inspired us on fields and fairways as well as courts and diamonds in the first term of 2021/22. With astounding displays of sportsmanship, talent and teamwork, they remind us that in times of adversity we can work together to face any challenge. 2021 was nothing short of a banner year for the UBC Okanagan Heat. As teams get back underway, here are just some of our favourite moments from the first term.

On their home diamonds at the aptly named High Noon Park in Kelowna, the Heat women’s softball team hosted the best university teams in the country for the National Championship in October.

After being postponed the previous year due to the pandemic, anticipation for the event was high and excitement was in the air.

In just their third year as a team, the Heat were victorious after winning six straight games, bringing gold to the Okanagan and staking their claim as a force to be reckoned with on the national softball stage. 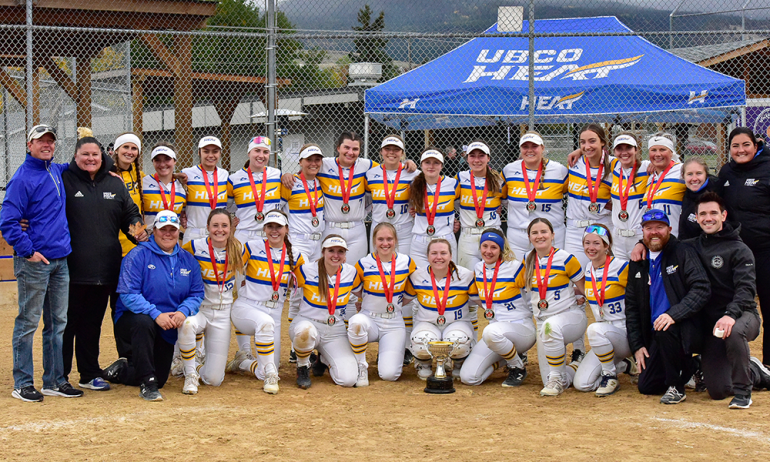 Reaching the podium in a cross-country race is a testament to training, commitment and perseverance. Just over 28 minutes after the starter’s pistol cracked the cool morning air of Saskatoon, Joanna Brown and Lauren McNeil crossed the finish line of the Canada West Championship. They led the Heat women’s cross country team to a silver medal with just two-one hundredths of a second between them and led the trailing pack by over half a minute.

The historic Plains of Abraham in Quebec City was home to the 2021 U Sports Women’s Cross Country Championship. Here, UBC Okanagan Heat women’s cross country newcomer Lauren McNeil blazed a path to silver that left even our own Scorch speechless.

Known affectionately as the Buxton Bullet, after her hometown in the UK, Lauren finished the 8km course with an astounding time of 28:28.2, garnering not only individual silver, but the U SPORTS Rookie of the Year and First Team All-Canadian honours.

With only one year of conference championship experience to their credit, the UBC Okanagan Heat women’s golf team rallied on the greens under the overcast skies of Squamish to a silver medal finish. Each of the five team members finished in the upper echelon of the 34-competitor, seven-team spread.

From 1993 to 2003 and since its reintroduction in the 2013-14 season, the Heat have answered the call of the Presidents’ Cup Challenge. The long-standing rivalry with Thompson Rivers University was partially settled in 2021 with the Heat women’s basketball, soccer and volleyball teams accumulating enough points to bring home the women’s cup for the first time since 2017.

The fate of the men’s cup hangs in the balance with the scores almost tied, but will be determined later this month in a volleyball faceoff.

Looking out the window on this mid-January day, it’s hard to imagine that the snow-covered expanses in and around campus will soon make way for the fresh-cut green grass and white chalk lines of competitive sports fields. Beneath the blanket of white, goal posts stand proud, nets eagerly await their defence and running lanes lay in wait.

In the meantime, we have the charging and screeching of high-top sneakers on the painted maple floors of UBCO’s basketball and volleyball courts. Both the men’s and women’s teams will dial up the temperature of the Furnace through the end of February, stoking the embers with their energy, passion and skills.