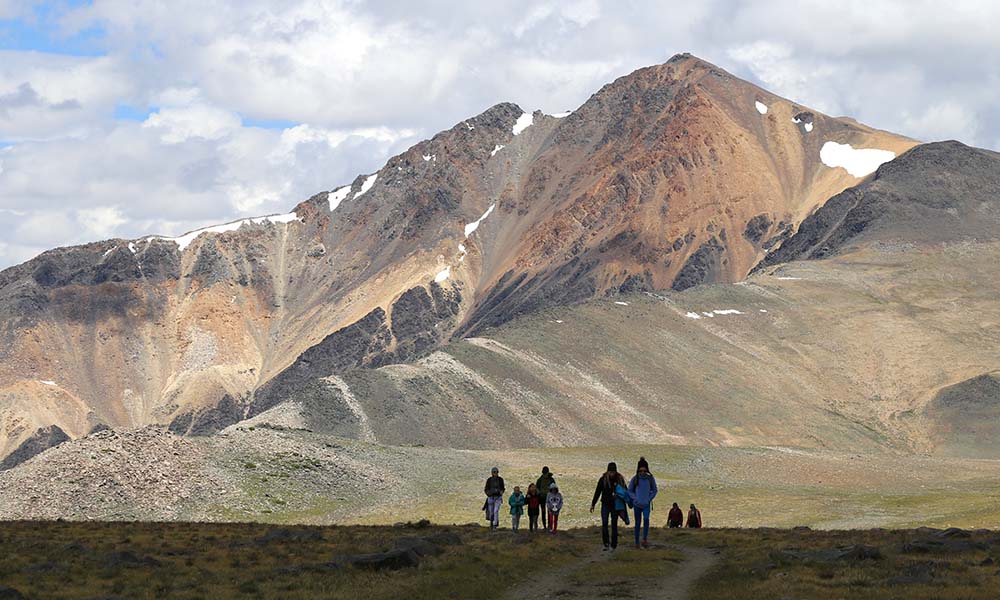 IN A SPRAWLING LOG BUILDING CALLED CROOKED CREEK STATION, situated 3,090 metres high on the broad shoulders of California’s White Mountain, ten kids—along with their parents—are getting examined in various ways.

At one test station, their limbs and bodies are scanned with ultrasound equipment. At another station, subjects pedal an exercise bike and breathe through a tube while their brain’s blood flow velocity is measured via a transcranial doppler. Elsewhere, body mass and body water measurements are noted, and chest ultrasounds help researchers look for “lung comet artifacts,” a possible sign of edema—or, excess water building up in their lungs.

Conducting the tests and recording the data is a four-person team from UBCO’s Pediatric Inactivity & Exercise Physiology Research Lab (PERL), led by Dr. Ali McManus, at the School of Health and Exercise Sciences.

Thinking back on that trip to White Mountain in August 2019, Dr. McManus laughs a bit at the “experiment run like a summer camp” way up in California’s Sierra Nevada range.

Involving a two-day drive from Kelowna, BC to Irvine, California, while lugging 350 kilograms of sensitive testing equipment, the project was designed to investigate how high-altitude activity impacts children versus adults. For the UBCO students with Dr. McManus, it was a unique opportunity to stretch beyond the classroom and lab setting and take their learning to new, so to speak, heights. 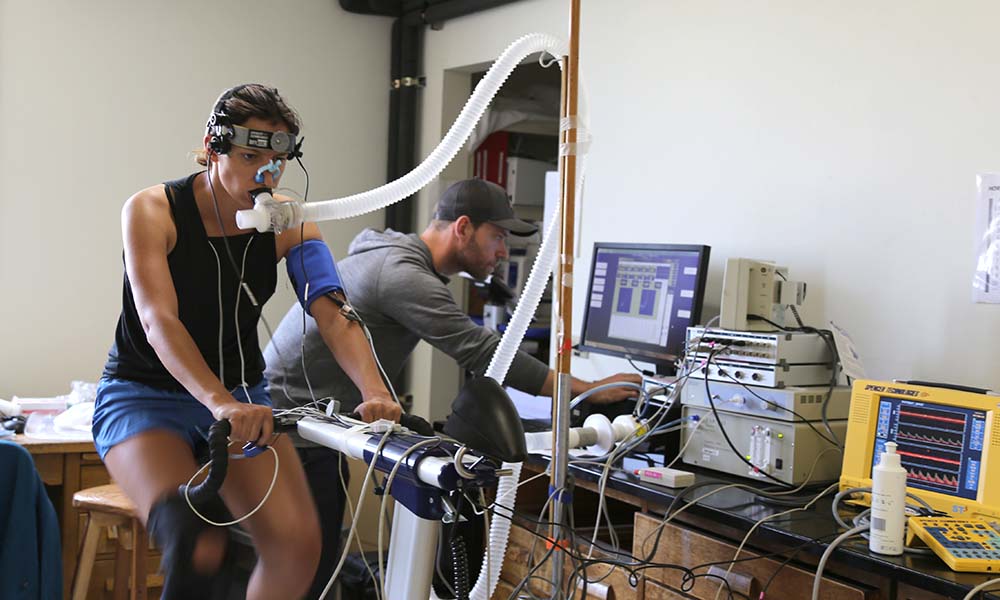 Doctoral student Matt Rieger looks at the data while a study participant’s brain blood flow velocity is measured with a transcranial doppler.

In the past decade or so, there’s anecdotal evidence that an increasing number of parents who emphasize fitness are taking their kids on high-altitude adventures at 2,500 metres or higher—such as hiking and climbing.

While there’s been plenty of research on Acute Mountain Sickness (AMS) in adults for more than a century, “there’s little known about what happens to children at high altitude,” says Dr. McManus.

The Kelowna area is full of such active parents and kids. And Dr. McManus, with a broad interest in the physiological effects of exercise—or lack of it—on youth, found an opportunity to take PERL’s research on a hike.

At the White Mountain research project, children aged seven to 14 were far from sedentary. “Not every family wants to take kids up to high altitude,” says Dr. McManus, “so these kids and their parents were definitely at the active and fit end of the spectrum.”

Matt Rieger, one of three doctoral students on the project, already knew first-hand the impact of thin air on the body and brain. Nearly a decade ago, while working as a forest firefighter in the summer and pondering his future career options, Rieger trekked through the Himalayas in Nepal. By chance on that trip, he met Dr. Philip Ainslie, a UBCO professor renowned for his research on hypoxia—or low levels of oxygen in the blood—at high altitudes. 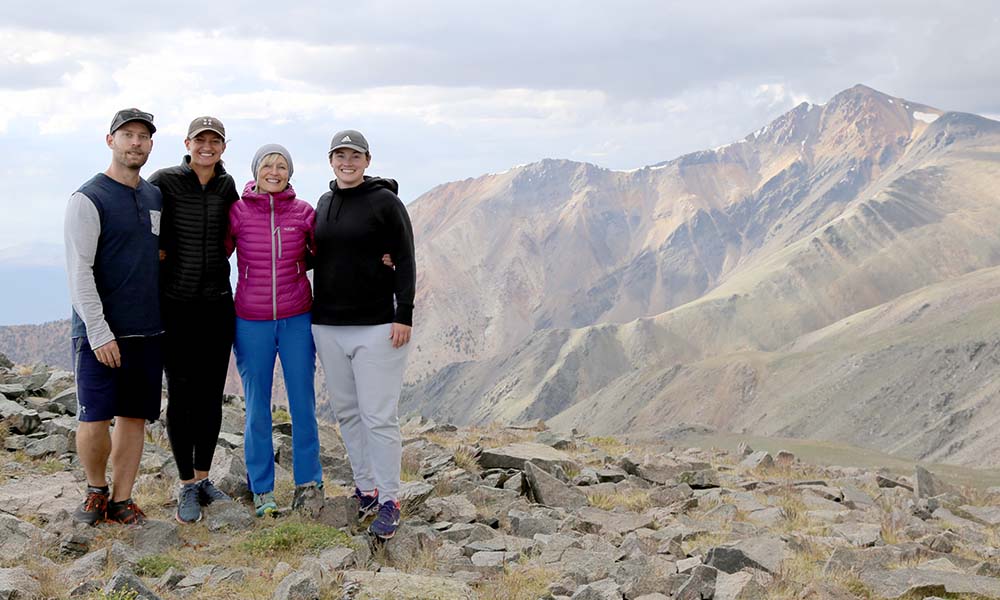 Rieger saved for two years to afford his recreational jaunt to Nepal, and Dr. Ainslie was there conducting research. “You’re telling me you can do this kind of thing for work and get paid for it?” Rieger laughs, recalling how he unexpectedly stumbled onto his current academic path.

After that influential encounter he headed to UBCO, earned his master’s degree under Dr. Ainslie, and is now studying under Dr. McManus for his PhD in pediatric exercise physiology.

The research done at White Mountain will be a big part of Rieger’s doctoral dissertation, and Dr. McManus had him helm the project.

“I did a bit of everything,” recalls Rieger. “After developing the research questions with Dr. McManus, we recruited a team of researchers and participants. Our goal was to track basic cardiovascular changes that occur during high altitude travel in children.”

The team measured changes in ventilation and the heart walls as well as cardiac output, pulmonary artery pressure and brain blood flow in the children. Rieger is currently analyzing and compiling the data into a series of reports for different scientific and recreational audiences.

Exercise capacity is known to shrink at high altitude, so the UBCO team also did tests to assess changes in breathing and blood flow responses to exercise while on the mountain.

After baseline testing near sea level in Irvine, the research participants were driven about eight hours to the Crooked Creek Station, the first of the research facilities operated by the University of California, Los Angeles on White Mountain. To minimize the adverse effects of their rapid ascent up the mountain in vehicles, the families and research team spent two days acclimatizing. 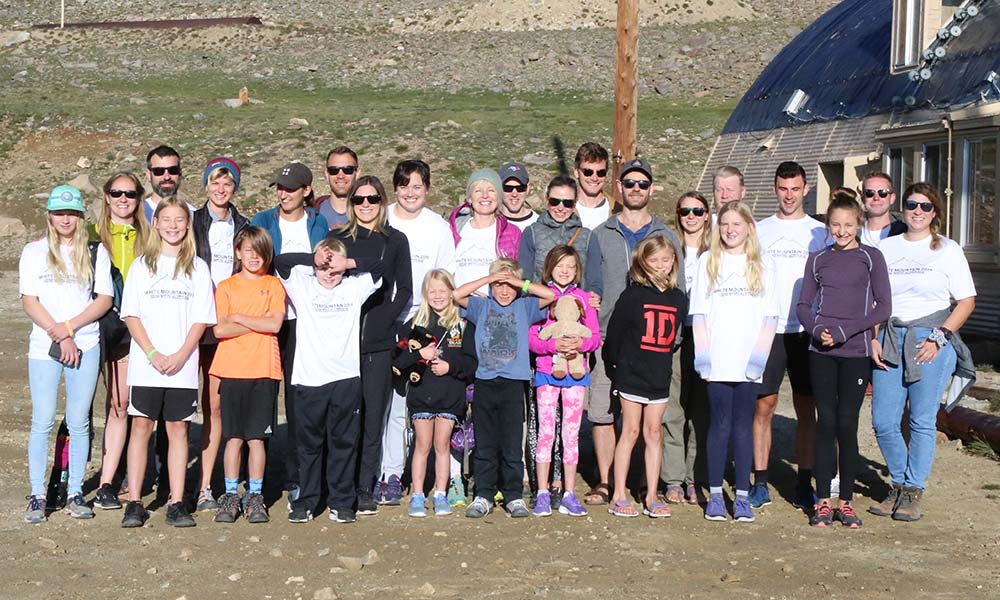 The entire research and participant team at Barcroft Station.

At the same time each morning, the kids and their parents were also put through a battery of tests and exercise requirements. Afterwards, they were free to go on hikes, take part in games, or just hang out together at the two stations they stayed at.

Because the next highest facility, Barcroft Field Station—located at 3,800 metres—was 25 kilometres away, the families and researchers drove. Led by the UBCO team, the expedition included 24 researchers and participants, including collaborators from the University of Victoria, Cardiff Metropolitan University in the UK, and the University of California, Irvine Medical Center.

Brianne Smith and her three daughters, Sloane, 13, Jordana, 9, and Aspen, 7, were one family involved. Smith’s children had participated in other pediatric activity research Dr. McManus previously conducted at UBCO.

“In our house,” says Smith, “we talk a lot about the value of participating in research, and that a lot of these projects only get done if people volunteer. So we’re avid research volunteers. And this was really a unique opportunity.”

They do a lot of rock-climbing and multi-day backpacking hikes. “But we hadn’t done anything quite at that altitude prior,” says Smith. Though her youngest experienced a headache and some nausea the first night on the mountain—possible signs of AMS—Smith was reassured by the fact that two wilderness medicine doctors accompanied the kids and researchers. 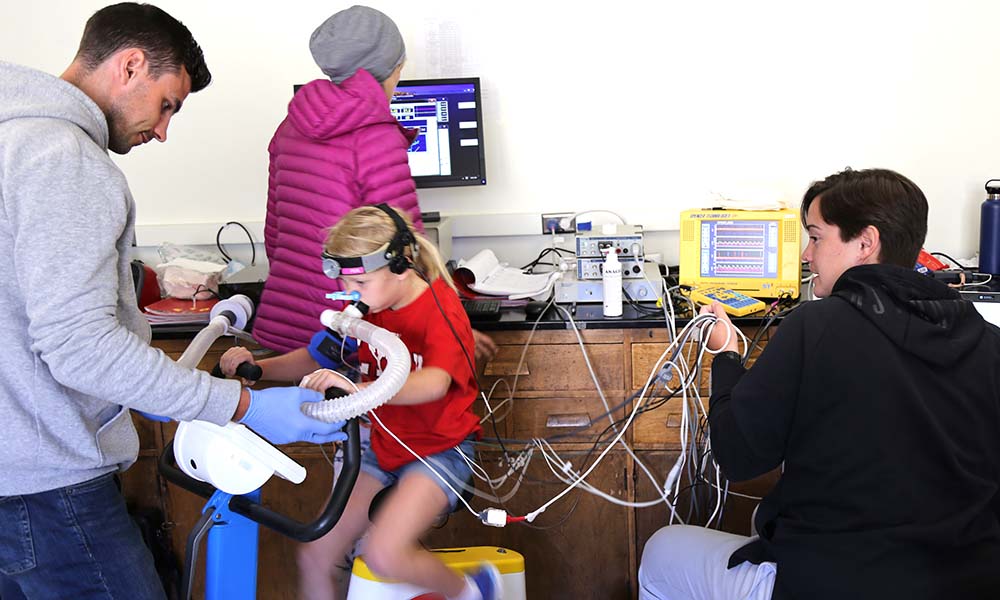 Seven-year-old Aspen Smith is providing researchers with valuable data about the impact of high altitude on children.

There were also three activity coordinators who arranged games and other activities during the trip to mimic what families might do on a high-altitude holiday.

While data from the trip is still being analyzed, early findings were recently published in the journal Wilderness & Environmental Medicine.

The study, says Dr. McManus, “gives insight into what that young healthy body is capable of doing with the insult of a lack of oxygen. This is what happens when a kid goes up to high altitude. How sick do they get? How quickly do they recover, and what are any standout issues that we have to be aware of?”

“AMS isn’t necessarily more prevalent in children,” explains Rieger. “But those who become sick have greater symptoms, or a different presentation of symptoms,” including more fatigue and nausea, but less of the classic headache.

While dehydration happens to everyone at high altitude, the PERL team found children lost body water at high altitude sooner and more rapidly. “All the kids were absolute warriors during the research,” says Rieger, adding that, in addition to the hard data collected, conducting research on the flanks of White Mountain also produced anecdotal observations that should help science and medicine better understand AMS in pint-sized mountaineers.

“It was really fun being up there with the kids, taking them on a trip, and actually seeing how they do at high altitude in a way that has never been done before,” smiles Rieger.