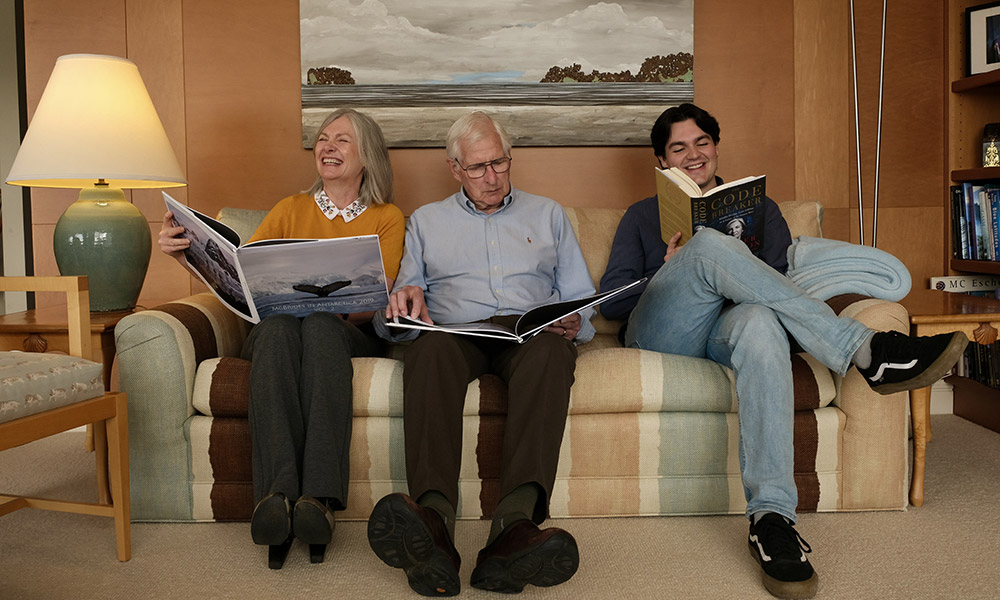 The McBride family can answer that.

Friday, at UBC Okanagan’s Faculty of Health and Social Development convocation ceremony, Kate McBride will cross the stage after earning her Master of Science in Nursing. Minutes later, her son Kieran will pick up his Bachelor of Human Kinetics degree. And, on the stage in the official platform party will be Barry McBride—Kieran’s grandfather and Kate’s father-in-law.

Barry is also UBC Okanagan’s very first Deputy Vice-Chancellor. And to say UBC runs in the blood of the McBride clan might just be an understatement. He was the top administrator at the newly formed university campus and led the students, faculty and staff during UBCO’s formative years until his retirement in 2007.

But the roots go much deeper than that.

“I’m just adding everyone up, and there are 13 of us in the family with a UBC degree,” says Barry. “My mother and father both graduated from UBC, as did my wife Barbara and Barbara’s mother—so Kieran’s great-grandparents and grandparents, his father and now his mother all have UBC degrees.”

UBC Okanagan was established in 2005 when UBC was granted the land and buildings at the then-Okanagan University College’s North Kelowna campus.

Barry McBride is Professor Emeriti of Microbiology and Immunology in the Faculty of Science. Before moving to the Okanagan to take on the leadership role at UBCO, he served as the Dean of Science and then Provost and Vice-President Academic at the Vancouver campus.

To have studied, worked and then taken on a leadership role at both campuses gives Barry an immense sense of accomplishment and honour.

“I am incredibly proud of UBC,” says Barry. “It’s a world-class institution that has grown to be seen internationally as a very important research and teaching university. And I am so pleased to see that UBCO has done so well. We should be proud of the number and quality of students UBCO hosts and the talent they bring to the Okanagan.”

Since its inception, the student population at UBCO has grown from the first class of some 3,000 students to more than 12,000 undergraduate and graduate students. More than 22,000 degrees have been conferred since the campus offered its first lecture. And the campus has expanded—from 12 original buildings to, currently, more than 53.

“I am beyond delighted that Kate and Kieran are graduating from this institution. I couldn’t be more delighted they chose UBCO,” says Barry.

For Kieran, the close-knit campus and high calibre of the human kinetics teaching staff were the main attractions of the Okanagan campus. While he grew up in Vancouver, Kieran says he never felt any pressure from his family to attend UBC—but when it was time to apply to universities, he had one specific place in mind.

“I didn’t want to go too far from home and UBCO’s Health and Exercise Sciences program is world class,” he says. “I’ve been so fortunate and had many great experiences, even working on an undergraduate research program that was an amazing opportunity. I gained so much experience at UBCO.”

He’s not sure what’s next on the horizon and he hasn’t ruled out a master’s degree. Now that his mother has one, it could be the next family tradition.

Kate readily admits having a son at UBCO helped her decide where to earn her master’s. As a registered nurse, she’s enjoyed a fulfilling career, working as a rehab nurse with Vancouver’s GF Strong Rehabilitation Centre and, more recently, enjoying a leadership role with the Provincial Health Services Authority.

“I was inspired by Kieran going to UBCO. It was appealing to be going to the same school as him, although he might not feel the same way. But I thought to myself, ‘it’s time to do this. And yes, I can do this.’”

If it hadn’t been for COVID-19, Kate and Kieran would have spent more time at the same campus together. But the pandemic didn’t get in their way with both successfully completing their journeys, and thanks to a twist in timing, both were scheduled to graduate the same day, in the same ceremony.

“I waited a lot of years before starting my master’s and I was really fortunate to be with a good cohort—most of the students were half my age,” says Kate. “And now I’m excited to be graduating with my son.”

And both agree, they had the family tradition of UBC degrees that helped fuel their momentum.

“It’s hard to express how incredibly grateful I am for all the support I’ve had, especially all the years I had to do it at home,” says Kieran. “I was essentially doing my university studies with my parents, and for some people, the experience could have been terrible. But they were really supportive—honestly, the support I’ve had from my older sister, parents and grandparents has been amazing and inspirational at the same time.”

Kate, too, says the McBride family bonds were uplifting from the get-go. While she’s had support from her father and in-laws, her husband Chris—a spinal cord injury researcher turned community organization partner who collaborates with UBC researchers on both campuses—was also cheering along in the background. There was no way this master’s degree was not getting done.

“The support I’ve had from Barry and Barbara over the years has been incredible. They are such awesome role models, for myself, our children and our younger generation,” says Kate, adding the youngest McBride grandchild will start her UBC degree in September. “So, the tradition continues. I feel very fortunate and privileged to have such wonderful role models who have taught us all to be the best we can be.”

Content type: Media Release
More content from: College of Graduate Studies, Deputy Vice-Chancellor and Principal (Office of the), Faculty of Health and Social Development, School of Health and Exercise Sciences