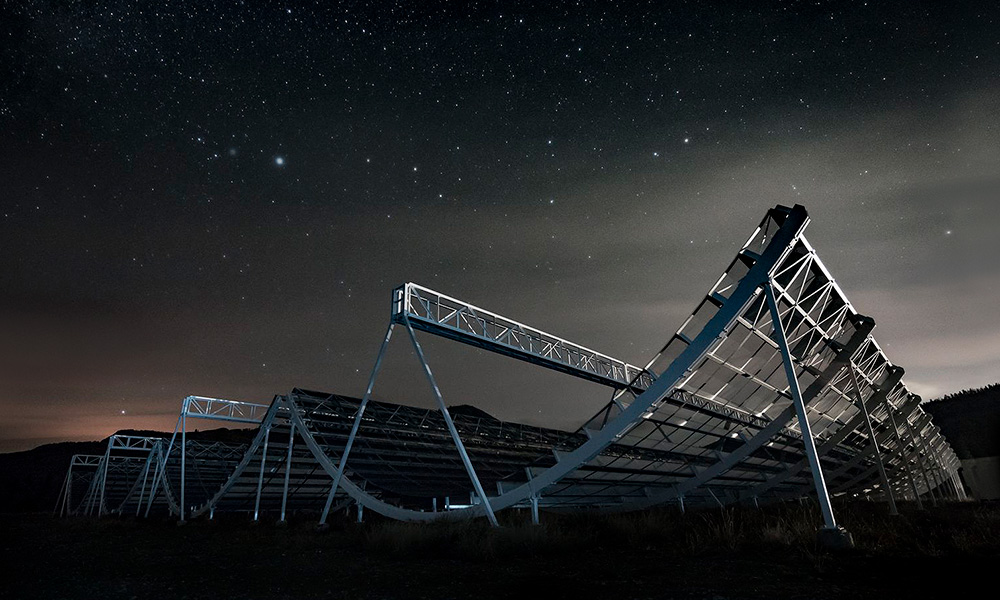 NESTLED IN A REMOTE VALLEY JUST AN HOUR outside of Kelowna, amongst ridges and plateaus where cattle graze, Dr. Alex Hill and his students are watching the stars. But they’re not star-gazing for the fun of it; rather, the team is using a state-of-the-art telescope at Canada’s largest radio observatory—the Dominion Radio Astrophysical Observatory (DRAO)—to understand the origins of our universe.

“What motivates me on a day-to-day basis is just pure curiosity about understanding how the universe and our galaxy fit together, and how stars form,” explains Dr. Hill, an Assistant Professor in the Irving K. Barber Faculty of Science. “The universe is 75 per cent hydrogen and 23 per cent helium. The remaining two per cent consists of everything else we’re made of—like carbon, oxygen, nitrogen and iron—and that’s all created by nuclear fusion in our stars.”

His research covers billions of years, from birth to death. Stars die in various ways, and depending on the size of the star it can be quite violent or very gentle, Dr. Hill adds. “When stars die, they return all those elements to the gas between the stars. This eventually creates a new generation of stars, and this new generation has even more of the heavy elements that life on earth consists of.

“Understanding where the stuff we’re made of comes from is my everyday focus.”

To do this, Dr. Hill is part of a team of over 100 astronomers and engineers from both campuses of UBC, the University of Toronto, McGill University and other partners around the world. Together they operate CHIME—the Canadian Hydrogen Intensity Mapping Experiment—at DRAO.

Dr. Hill leads a group including post-doctoral researcher Dr. Anna Ordog and four undergraduate students at UBCO, all studying gas between stars in the Milky Way. They lead the Milky Way science effort within CHIME and aim to study the universe in its entirety. They also work to understand the CHIME telescope itself—a massively complex endeavour.

The telescope maps out the intensity of hydrogen emission from across the universe in order to understand the universe’s evolution—especially given the discovery of dark energy, which causes the expansion of the universe to accelerate over time, opposite of what physicists expected due to the effects of gravity.

Lying out in a large field and shielded by nearby Mount Parker, CHIME uses four- 100-metre by 20-metre half-pipe reflectors to collect radio signals. “In 2022, the raw data coming into CHIME is estimated to be about 240 terabits per second,” explains Dr. Hill. “To put that in perspective, when CHIME was built in 2016, the worldwide cellular internet traffic amounted to only six terabits per second.”

The digitized signals collected by CHIME are then processed to form a three-dimensional map of hydrogen density, which will be used to measure the expansion history of the universe. At the same time, these signals can also be combed for fast radio bursts and can monitor dozens of pulsars on a daily basis. 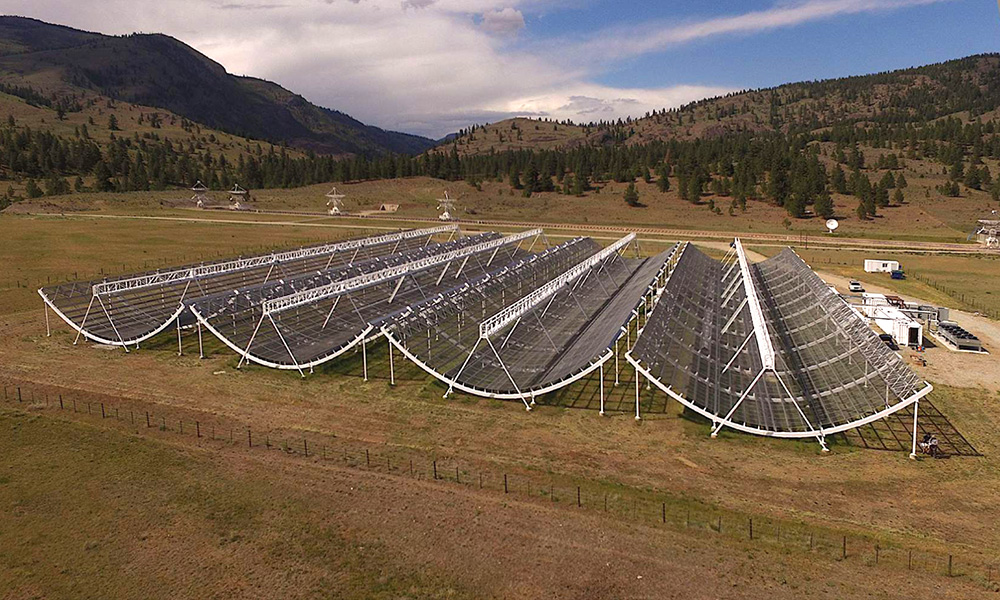 CHIME, looking north. The parabolic reflecting surface of each of the four cylinders is 20-metres wide and 100-metres long. Two people standing at the bottom right of the photo help to show the radio telescope’s physical size.

Inside the observatory, computers can only be used inside metal cages, and transmitting devices like cellphones and microwave ovens are prohibited to protect the highly sensitive telescope from interference. “The signals we’re searching for are so faint that a single cellphone on the moon would completely swamp it,” says Dr. Hill. “The mountains around the observatory also protect us from a lot of the radio signals produced in the Okanagan Valley.”

Nasser Mohammed, a fourth-year physics and astronomy honours student, worked at DRAO for four months as part of a NSERC Undergraduate Student Research Award. He says that his experience at the observatory was enriching on multiple levels—so much so that he is returning to continue his research for his honours thesis.

“I had the opportunity to collaborate with other students and present my work to the scientists there. It’s one thing to present to your peers, but it’s another to present and discuss issues with people who have 30-40 years’ experience in this field,” he explains. “Working with these researchers gave me a confidence in myself.”

Mohammed points to the fact that being physically onsite with the telescope also helped many students working on data calculations better understand the underlying physics in their work. But perhaps most valuable, especially for Mohammed, were the insights gained during discussions with dozens of researchers and engineers.

“In the classroom, a professor teaches one thing, but at the observatory, we had different people there with different expertise. Instead of one professor to 20 students, there were three professors to one student. It was amazing.”