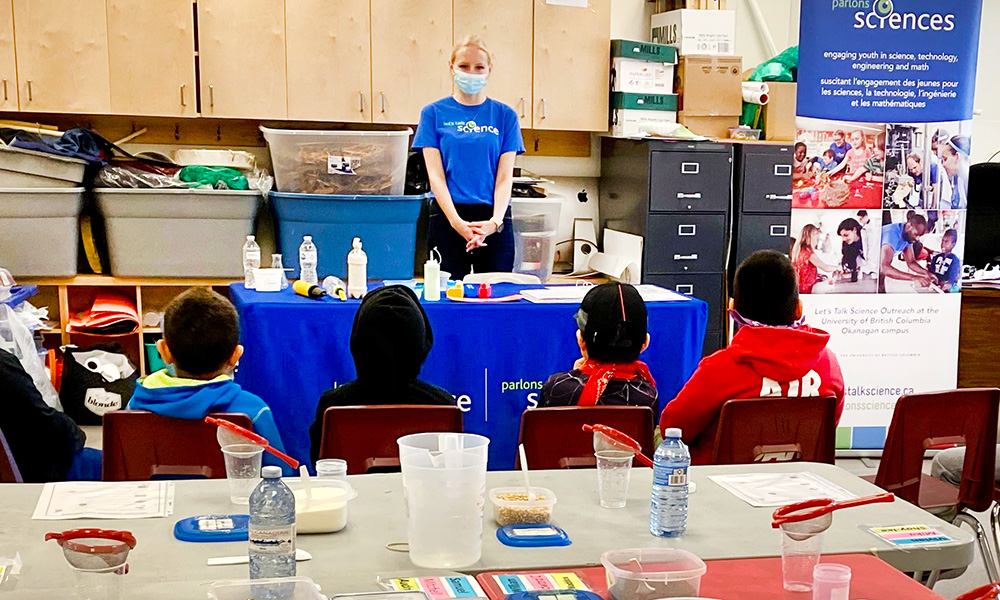 Location
Kitimat, BC, located in the traditional territory of the Haisla Nation

Traditional territory of the Nisga’a Peoples, Nass River Valley, BC

WITH LARGE BOXES FILLED TO THE BRIM WITH VARIOUS SCIENCE RELATED SUPPLIES—including tomato seeds that travelled to space, test tubes, beakers, suminagashi ink and litmus paper—Serena Slonowski and Katrina Martel were eager to begin their journeys to northern BC as part of their Community Field Experience (CFE).

The CFE is an opportunity for Bachelor of Education students to experience teaching and learning in a new environment, where they can apply their educational knowledge and skills within community organizations such as art galleries, museums and non-profits. For their CFE, Slonowski and Martel worked with Let’s Talk Science, a national organization that provides free Science, Technology, Engineering and Mathematics (STEM) programming and resources for educators, early-year centres, community organizations and parents or caregivers.

The UBC Okanagan Let’s Talk Science site started in 2018 to connect student volunteers with children and adolescents to pass on their passion for STEM. The volunteers and donors help make science more accessible by providing the resources, supplies and expertise. For Slonowski, the timing of the UBCO site opening was perfect. At the time, she was an undergraduate student in the Bachelor of Science program and very passionate about making science available for all.

“I got involved with Let’s Talk Science because I wanted to make science more accessible, but I had no idea where to start,” she says. “My supervisor started the Let’s Talk Science UBCO site and was reaching out for volunteers in her classes, and the timing was excellent. I began volunteering in 2018 and started working with the organization part-time in 2019.”

Part of the organization’s mission is to make STEM accessible for all children and youth including Indigenous youth and those in rural and remote communities. Slonowski wanted to attend an outreach initiative that supported equity, diversity and inclusion outcomes, but timing it with her undergraduate courses was impossible. The CFE and the support and funding from the national Let’s Talk Science team changed that. 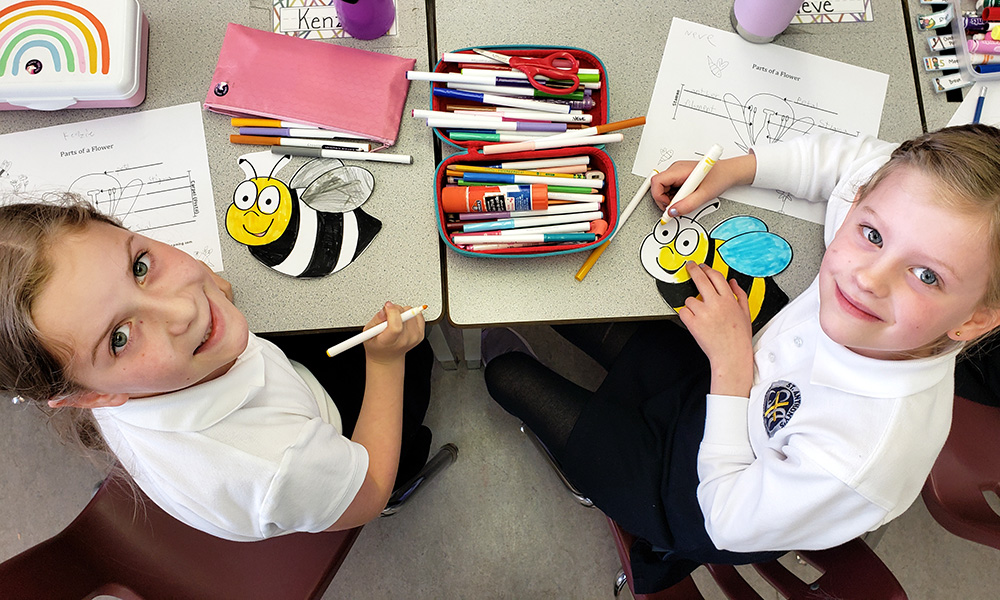 These students are exploring what would happen if there were no bees to pollinate.

“As part of my truth and reconciliation journey as an educator, I wanted to learn how to take steps to best support Indigenous learners as an uninvited European settler on these lands, especially in science class,” she explains. “I wanted to learn alongside and from the youth and community members, and what it means to teach and learn on Indigenous lands. This meant stepping out of my comfort zone. I had to challenge my pre-existing biases and assumptions from growing up in a western education system.”

After much research and many conversations, Slonowski identified an opportunity to work with the schools in the Nisga’a Nation in Nass Valley, BC, for the main duration of her four-week experience.

Each day of the practicum, Slonowski and a volunteer would wake up early to load the van to visit a school in one of the four different villages in the Nation, which were up to an hour and a half apart. Working with the school principals earlier in the year, Slonowski coordinated activities that paired with what the students were learning about in class. Activities varied from exploring water quality by testing the school’s water to replicating how the digestive system worked.

“We gave a demonstration and then students had about 45 minutes to build, spill, mix and get messy,” she laughs.

Since Let’s Talk Science has a partnership with the Canadian Space Agency, one activity involved bringing tomato seeds that had been exposed to outer space along with a package of store-bought tomato seeds.

“We planted the seeds with the students and had them hypothesize how outer space conditions might affect seed germination.”

As for her own learnings, Slonowski says she will continue using her experiences and feelings from the CFE to continuously challenge not only herself but also her beliefs. “I was nervous I would struggle to build relationships with the students and community members, but I truly felt welcomed by everyone and the students were so eager to connect with me. I appreciate the kindness they showed me.” 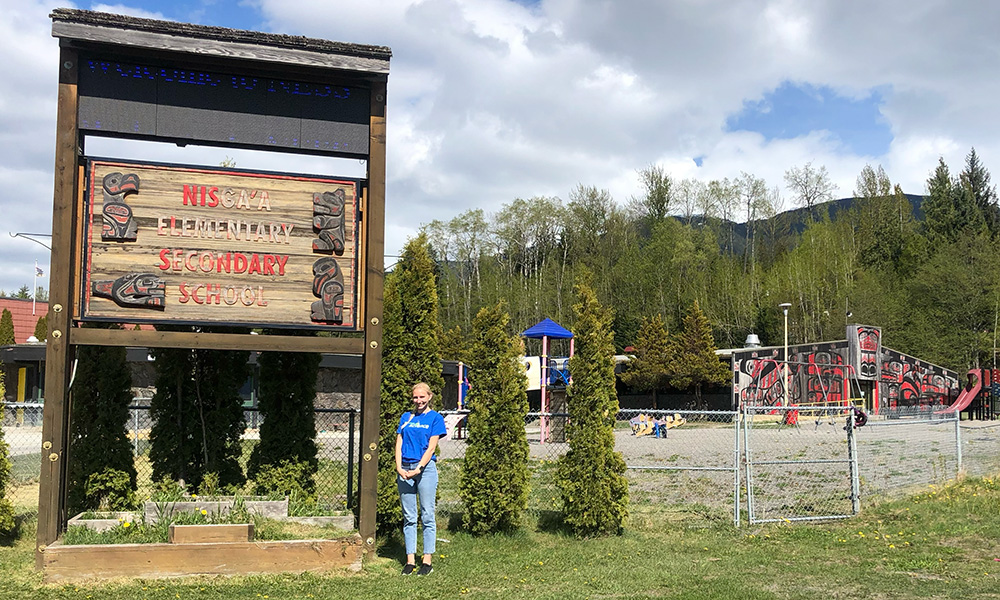 Serena Slonowski during her community field experience in the Nisga’a Nation.

Meanwhile, about two hours south of Slonowski, Katrina Martel was reconnecting with her hometown of Kitimat.

“I haven’t been in the elementary schools in years, and in going back it looked very much the same as when I grew up there,” says Martel with a smile. “It was quite nostalgic but I was also coming in with a different perspective—one of an educator—so I felt like I had a much greater appreciation of things when I returned.”

There was excited chatter as Martel walked down the school hall. Groups of students would approach her and ask if she was “the science lady,” as news of a visitor coming to the schools had travelled fast after her first few sessions.

Students were eager to try the “super science challenge” she had brought with her. The challenge comprised six activities that included an egg drop, building a bridge using paper, and creating a roller coaster from tubing and pipe cleaners.

“The roller coaster ended up being the most popular; students were so engaged trying to get a loop working. We ended up changing the order of the activities so they could spend more time on it.” 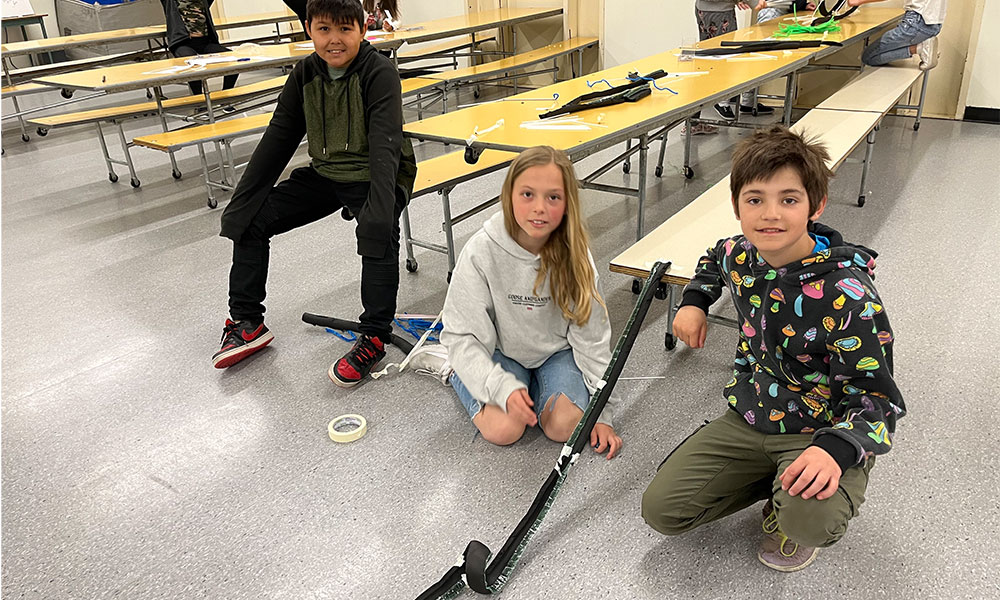 In addition to providing workshops selected by the teachers, Martel had the opportunity to create a workshop based on computer science, which she studied during her undergraduate degree.

“I was a bit nervous, but the workshop went really well,” Martel says. “I had both students and the teachers saying how cool it was and how engaged the students were.”

But it wasn’t just the students that Martel affected. “Following the sessions, I had teachers telling me they were apprehensive about incorporating science activities into their classroom, but seeing the workshops helped them realize that you don’t need expensive equipment for STEM. It can be accessible.”

Both Martel and Slonowski are incredibly grateful for the opportunity the CFE provided.

“It was a full circle moment for me, seeing some of the teachers that taught me in elementary school and now I’m in their class trying to give back,” says Martel. “I hope it’s made lasting memories for the students and they’ll carry that excitement for STEM forward. I want students to continue being curious and interested in seeking their own answers, because that was really great to see.”