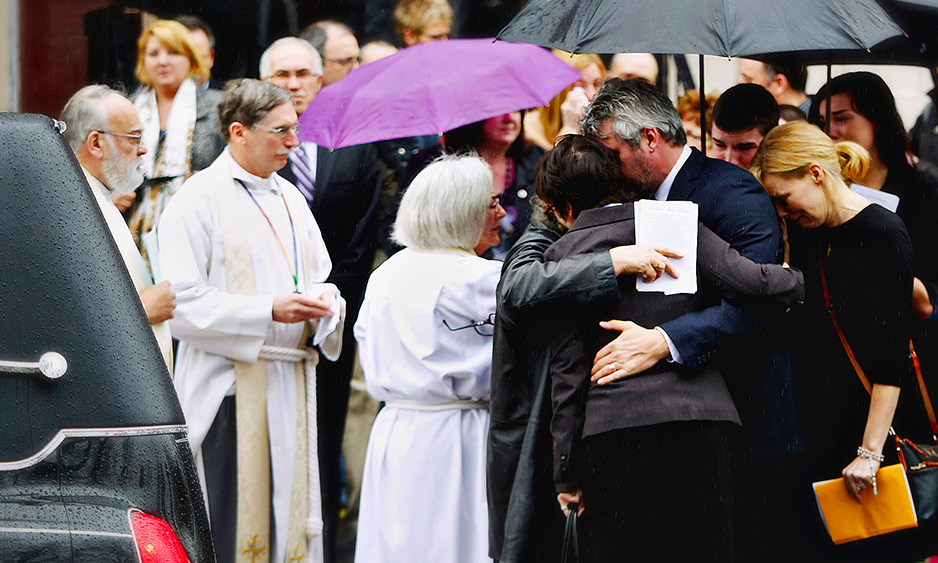 Moving moments, such as the family of Rehtaeh Parsons gathered at her funeral, will be shown during the screening of Backlash, Misogyny in the Digital Age at UBCO Tuesday, December 6.

For the National Day of Remembrance and Action on Violence Against Women, Espaces francophones UBCO, in association with Réseau Femmes and Inform’elles Colombie-Britannique, is presenting a film screening of the Canadian documentary, Backlash, Misogyny in the Digital Age. This screening will be presented in French with English subtitles.

The documentary is a shocking story of four female leaders whose lives are overturned by cyberviolence, says Dr. Francis Langevin, Associate Professor of Teaching in the department of languages and world literatures.

“Backlash, Misogyny in the Digital Age has had an important impact in Québec, where it was produced,” says Dr. Langevin. “Espaces francophones UBCO really wanted to make it available in the Okanagan, and especially for our campus community.”

Dr. Langevin is co-director for Espaces francophones which aims to offer French-language cultural and social activities to students in the French-speaking minority community of UBCO with the goal of highlighting and facilitating spaces for Francophone socialization.

This documentary film examines technology-facilitated violence directed at women and the types of backlash that women experience for participating in public life more broadly.

“The documentary exposes what is not often discussed in the public arena—and it definitely calls for action,” says Dr. Langevin. “It’s important to have a wide reach and a public screening in order to display solidarity with survivors of gendered violence, and to also make visible the resources that are available in our community, especially on the National Day of Remembrance and Action on Violence Against Women.”

This film includes images as well as written and spoken content that touches on topics that viewers might find distressing, explains Johannah Black, Education and Prevention Specialist from UBCO’s Sexual Violence Prevention and Response Office (SVPRO).

“These examples can be shocking and disturbing for viewers, particularly those who have their own experiences with technology-facilitated violence or sexual violence,” she adds. “For anyone who needs support during or following the screening there will be support staff from SVPRO on hand.”

After the screening, guests are invited to attend a question and answer period with Co-Director Guylaine Maroist, facilitated by Blanche Monabeka. This session will be held in French.

This event is free and open to all, but registration is required. To register for this screening and for a more detailed content description, please visit: backlashUBCO.eventbrite.com

This event is organized by Espaces francophones, with support from the Programme de français and a number of UBCO faculties and schools along with the Sexual Violence Prevention and Response Office , and the UBC Okanagan Equity and Inclusion Office.