UBCO researchers say performance may not change, but perception does 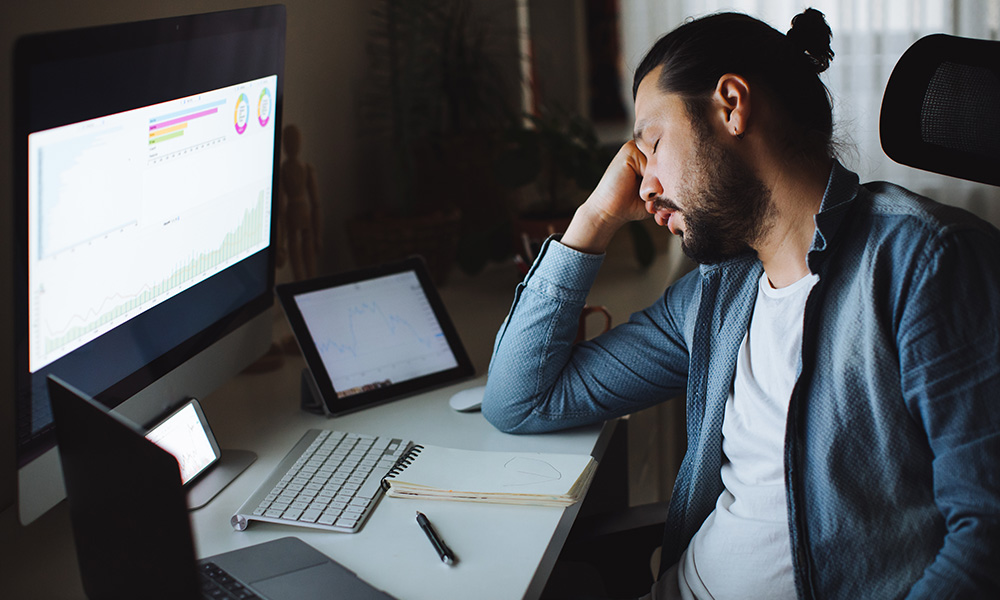 New UBCO research takes a closer look at the physiological changes that occur within the motor pathway from the brain to the muscle as a result of sleep deprivation.

Most people, whether they are shift workers, first responders, students, new parents or those working two jobs, have experienced feelings of fatigue through sleep deprivation. And many also know if they are overtired, even the simplest tasks may seem more difficult than usual.

Brian Dalton, an Assistant Professor in UBC Okanagan’s School of Health and Exercise Sciences, says despite the high prevalence of sleep deprivation, little is known about its effects on perceived and performance fatigability.

Perceived fatigability, he explains, refers to how a person feels about the amount of effort required to do a task, such as curling a dumbbell. It’s different than performance fatigability, which is an actual decline in the physical execution of a task. Both can be negatively impacted by lack of sleep, which raises important health, safety and performance concerns for sleep-deprived people.

Dr. Dalton and his team of researchers, including Dr. Chris McNeil and doctoral student Justine Magnuson, recently published an exploratory study that takes a closer look at the physiological changes that occur within the motor pathway from the brain to the muscle as a result of sleep deprivation.

“A person’s perception of the effort needed to perform a physically fatiguing task might be markedly different from that person’s true performance capacity,” says Dr. Dalton. “This is an important consideration given that work and daily life activities are typically carried out based on perceptions of effort and fatigue.”

The research was designed to independently assess excitability at the level of the brain and spinal cord during a fatiguing task after sleep deprivation, explains Dr. McNeil. The team also examined the effects of sleep deprivation on the actual performance—monitoring maximal strength of the muscles that bend the elbow and the capacity of the brain to drive these muscles maximally—and a person’s perceived fatigue.

Nine participants visited the lab in the late evening, remained onsite overnight and engaged in sedentary activities, such as reading and watching movies, until testing began about 25 hours from their reported wake time the previous day.

For the physically fatiguing task, participants completed a sustained, moderate-intensity elbow flexor contraction, like curling an arm with a dumbbell, for 20 minutes. Before, during and following the task, participants performed maximal effort contractions to test the capacity of their neuromuscular system, while also rating their perceived effort throughout the task.

On a separate day, the participants performed the same procedures but in a well-rested state. By comparing data across the two sessions, the researchers were able to determine the effects of sleep deprivation on the physically demanding task.

The researchers determined that performance-based measures were not affected by sleep deprivation, before, during or after the fatiguing task. However, sleep deprivation increased the perceptions of effort, task difficulty and overall fatigue—making the task seem more difficult than it is when well-rested. Therefore, a person’s perceived fatigability is different than their performance fatigability, especially when they are sleep deprived, adds Dr. McNeil.

“A person might be able to maintain their maximum strength when sleep deprived, but sustained or repetitive tasks can be more affected as motivation decreases and perception of fatigue increases,” he explains. “These findings could have important implications for workplace safety and everyday tasks.

“Despite our novel findings, owing to the limited sample size, further research is needed to investigate the relationship between the underlying mechanisms of fatigue and determine the potential functional consequences of the incongruent sleep deprived-related effects on performance and the perceived fatigability.”

The paper, published last fall in the European Journal of Sport Science, was supported by the Canada Foundation for Innovation and the Natural Sciences and Engineering Research Council of Canada.