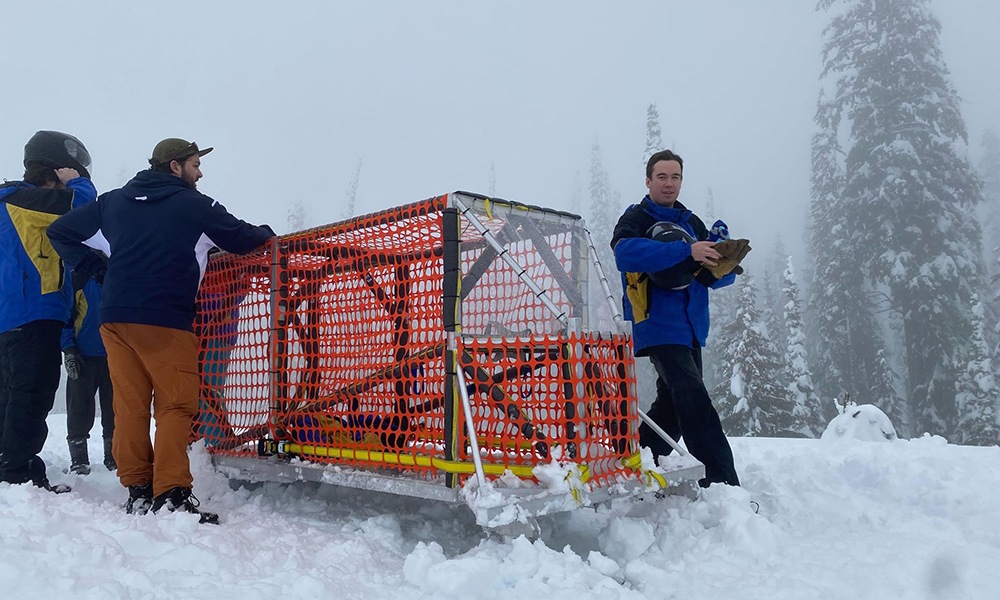 UBCO’s concrete toboggan, before decorated in its theme for the year, gets tested on the slopes at Big White to ensure it’s ready to perform.

While research at a university can take on many shapes and forms, students, faculty and staff with UBC Okanagan’s School of Engineering have found a way to combine winter sports and the thrill of competition into their daily work.

This year, UBCO’s School of Engineering is hosting the Great Northern Toboggan Race—a multi-day, student-led event where universities from across Canada race their hand-built concrete toboggans down steep hills. UBCO also hosted the event in 2015.

Though the competition is heavily focused on the design and manufacturing aspects of engineering, faculty supervisor Dr. Ahmed Rteil says lots of learning and professional development takes place during the design, construction and eventual race event.

“There is a lot of business and logistics planning that goes on behind the scenes so the teams recruit students from other areas of study,” he says. “The experience of participating in this event has helped students make connections with industry and round out their resumes which will potentially help them find employment after graduation.”

So, what exactly is a concrete toboggan?

It’s not completely concrete, says event co-chair Kyle Lessoway, who is working on his doctorate in mechanical engineering. In fact, the only parts of the toboggan that must be concrete are the actual runners that contact the snow during the downhill race.

Competing teams must design and build a custom-made toboggan capable of steering, braking and, most importantly, safely carry five people down the mountain. The toboggan with concrete skis, metal roll cage, and steering and braking mechanisms must weigh in at less than 350 pounds, explains Lessoway.

“The competition is unique compared to other engineering competitions in that it adds a spirited side to the event with themes designed into the toboggans,” he says, adding UBCO’s toboggan this year has a cow theme. “The event also allows competitors to also practice their soft skills such as communicating with industry partners and members of the public who are not engineering experts.”

For months the students have been preparing budgets, writing funding proposals and engaging with stakeholders. Even getting the team, and the sled, from their home to the competition city is a massive undertaking that a lot of undergraduate students don’t have experience with, explains co-chair and UBCO alumna Janessa Froese. She joined the team while studying sciences at UBCO.

“The skills I developed while I was on the concrete toboggan team were the reason I got my first job when I completed university,” she says.

First established in 1975, the Great Northern Concrete Toboggan Race is the largest and longest-running engineering student competition in Canada. This year, there are 15 competing teams, plus four non-competing teams, meaning there will be more than 385 participants arriving in Kelowna this week. Events kick off with a competitor interaction day where the students will participate in downtown tours including the heritage museums along with some events on campus.

Students will also participate in a concrete testing demonstration at UBCO’s campus and the Tech-Ex display at the host hotel the Delta Hotels by Marriott Grand Okanagan Resort on January 27. Race day takes place January 28 at Big White’s Tube Town.

Before hitting the slopes, each toboggan will be judged on a number of categories, such as the design of the toboggan as a whole, the level of ingenuity and innovation as well as how well it performs on race day. Each toboggan must pass a safety inspection prior to racing and any entries that fail will not be permitted to race.

The UBCO team has a track record of success in the event, including podium finishes at several events and placing second overall the last time the competition was held in Kelowna.

More information about the 2023 Great Northern Concrete Toboggan Race can be found at: www.gnctr2023.ca