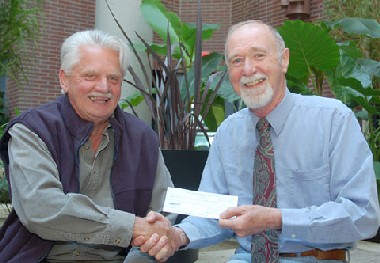 The Myra Canyon Trestle Restoration Society (MCTRS) will provide funding over the next three years to help UBC Okanagan researchers delve into the past and explore the future of the Kettle Valley Railway’s Myra Canyon trestles near Kelowna.

A cheque for $10,000 was presented to the research team on Tuesday.

A forest fire in 2003 destroyed 12 of 16 wooden trestles and damaged two steel trestles in Myra Canyon. While  the trestles are being rebuilt -– which MCTRS Director Ken Campbell says should be done by late summer 2007 — UBC Okanagan professors and students will be conducting archeological and historic fieldwork, and tourism management planning for the national historic site.

“The research project benefits us in many ways,” says MCTRS President Carl Marcotte. “This is a heritage site and the research will bring us more history – it’s a finding mission.”

Starting this summer, Anthropology Professor Richard Garvin, History Professor Maury Williams, and Management Professor Russell Currie, will document how the Kettle Valley Railway was built back in the 1910s, and the historical and economic impact the railway had on the Okanagan and the rest of B.C.’s southern interior.

“The sites for the archaeological research have been virtually undisturbed over the years,” says Campbell. “You can take yourself back to when men were working with relatively unsophisticated equipment and doing amazing things. We’re pretty excited.”

When the archeological work begins, the site will be a great classroom for university students and the community, says Williams. “One will be an academic dig involving faculty and students, and there is a proposal for another ‘public’ dig with the Kelowna Museum.”

Garvin says a site survey will begin in late August, with intensive work next summer, eventually leading to the creation of a field school at the site. There’ll be no shortage of help in Myra Canyon –- he says more than 20 students, and even a few former students, have already volunteered their help.

This summer Williams begins the historical research with a trip crisscrossing B.C.’s southern interior from Nelson to Princeton. “We will start to build an inventory of what’s out there about the railway’s history,” he explains. “Then a graduate student can begin the archival work.”

“Although the trestles are being rebuilt, there is not yet a management plan that addresses the socio-cultural, economic and environmental impact of this rebuilding on communities and organizations with a vested interest in Myra Canyon,” says Currie.

Prior to the 2003 fires, the Myra Canyon trestles drew 50,000 visitors a year, generating about $5 million for the B.C. Interior economy. It has been estimated that once the trestles reopen in 2007, visits could double to 100,000 people a year.