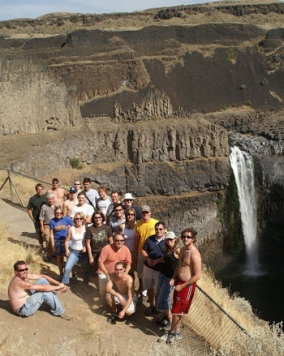 Earlier this month, glacial environment students from UBC Okanagan studied Palouse Falls in Washington State. Spectacular as they are today, the falls are only half as high as the torrent that flowed through this area during an Ice Age megaflood.

A group of UBC Okanagan students delved into the Earth’s long-held geological secrets earlier this month, traveling to a spectacular landscape known to scientists as the Scablands, near the small town of Washtucna, Washington.

There, the Palouse River cascades over stark rock cliffs in a waterfall almost as tall as the famed Niagara Falls, a testament to the power of geological forces. Yet the modern river is only a trickle in comparison with Ice Age floods that once scoured the valley.

“The scarp above and around Palouse Falls was carved by a high-intensity, short duration flood that occurred near the end of the last Ice Age called the Scabland Megaflood,” said Geology Professor Dr. Robert Young, who led his glacial studies class to the falls as part of his annual field education.

He notes that the modern river cuts a narrow, relatively low-elevation falls, whereas the old falls were nearly twice as high, and many times wider.

Young and his class of fourth-year glacial environments students embarked on the road trip to see a classic example of catastrophic landscape formation. In the field, they met up with several graduate students and professors from the University of Calgary and University of Alberta.

“We’ve begun to understand that some earth systems behave in non-uniform ways, and that those behaviors have left indelible changes in our landscapes and ecosystems,” said Young. “In the course, we evaluate the physical evidence left by glacial processes in the past, which helps to understand the types of variability we can expect with global change.”

Field trips like these demonstrate UBC Okanagan’s commitment to experiential learning that gives its students better access to their professors and higher-quality learning opportunities, Young said.