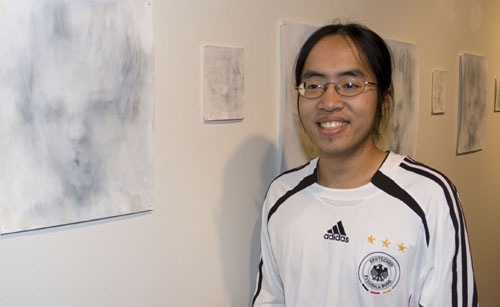 Artist Pudy Tong applied many washes of colour to form an always-incomplete image of a boy in his "Moonsburg" paintings. The images are Tong’s attempt to put a face to the voice of a boy heard over the public address system one morning at the Mundsburg, Germany, train station. Tong is a fourth-year fine arts student at UBC.

Art student Pudy Tong stood on the train station platform in Mundsburg, Germany – in the same place he stood each morning on his way to the university – and realized something had changed.

The familiar female voice of the station announcer was gone. In its place, a young boy’s voice heralded the next arriving train.

“It really threw me – and it made my day,” said Tong, who is now in his fourth year of the Bachelor of Fine Arts program at UBC Okanagan. He returned to Kelowna recently from a six-month UBC Go Global student exchange in Germany – an exchange he said changed him in subtle ways, and led to a dramatic series of enigmatic paintings.

After the surprise at the train station, Tong attempted to put a face to the voice of the young boy announcer. It was almost haunting – compelling — said Tong, as he exhibited his “Moonsburg” paintings recently at UBC Okanagan’s FINA Gallery.

Each painting in the series is a version of that boy’s face, as imagined by Tong. “It’s the sound of that voice translated into an image and it’s never quite concrete,” he said.

Tong and fellow UBC Okanagan fine arts students Scott Bertram and Dave Markin finished their third-year studies at Hamburg University of Applied Sciences earlier this year. Their work from – and since — that time overseas was featured in a recent Go Global art exhibition at UBC Okanagan.

The Go Global experience was fascinating, said Tong. “The Germans were great hosts. We were there during World Cup 2006, so basically the whole world was visiting Germany,” he recalled. “Going on an exchange like this helps place you. You come back with a real sense of where you want to go in your fourth year.”

Markin, whose installation during the Go Global exhibition included a thick carpet woven from strips of film once used as a movie trailer, found new perspectives during his Germany exchange.

“So many doors are open to you. It’s real-world experience and change is inevitable,” Markin said, describing his return to Kelowna where so much remained unchanged after six months abroad. “I felt like a tourist in my own life — I had changed, but nothing else had.”

Bertram, whose large canvases are both colourful and highly textured, said he appreciated the opportunity to experience German art up close. “It was a great experience to see the top art over there – especially the cutting-edge art. Seeing that in person allows you to realize their use of textures and the richness of colours.”

Though he has traveled before, Bertram found the exchange experience very exciting. “There’s something about it that opens you up,” he said. “You have to face leaving home, catching the right buses, and coping with hurdles that come up. How you deal with them teaches you a lot about yourself.”

Journeying abroad was a good thing to do from an artistic standpoint, too, said Bertram. “After three years in fine arts, you have a support group that knows you and your work. Going to a new environment gives you a chance to try things you might not try here.”

Dana Reiter, International Advisor at UBC Okanagan, noted that Tong, Markin and Bertram are among 15 students who recently returned from exchanges around the world—attending universities in Germany, Chile, Tahiti, Mexico — “all over the planet.”

Right now, 35 UBC Okanagan students are currently abroad or about to leave. Of these, three are headed to Hamburg, and another fine arts student will be leaving to study in Sydney, Australia.

The Go Global program allows students to study at foreign universities and earn credit toward their UBC degree program. Complete details about Go Global are available on the UBC Okanagan website at: http://okanagan.students.ubc.ca/global/. 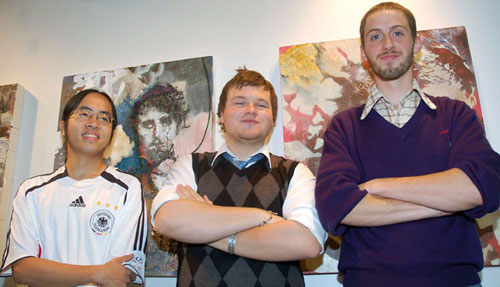