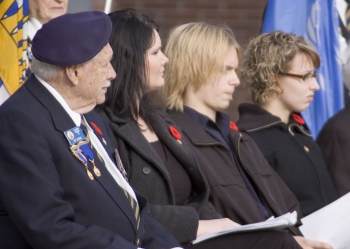 Kelowna veteran Art Brown listened to Remembrance Day speakers with students Aubri Reid, Jody Rud, and Karen Ryan, all of whom worked on establishing the first-ever Remembrance Day ceremony at UBC Okanagan last Wednesday. Brown is a Kelowna veteran who served with the Canadian Army for 35 years, and is president of the Kelowna-Veendam Sister City Association and chair of the Kelowna Cenotaph Upgrade Project.

The first-ever Remembrance Day service held at UBC Okanagan last Wednesday was a collaboration between students, faculty, staff and the community.

Four students — Jody Rud, Karen Ryan, Aubri Reid and Krystal Smith — were involved in the project from the earliest moments, as they had been developing a Remembrance Day community service learning experience in their Sociology of Aging class, taught by Professor Mary Ann Murphy.

Working on the project with the Ceremonies and Events staff and the Royal Canadian Legion Branch 26 Kelowna, the students help raised awareness on campus about the even with posters and a display in the UBC Okanagan library, and setting up a poppy table with baked goods as a fund-raiser in conjunction with Royal Canadian Legion.

“The idea arose because we knew there had never been a Remembrance Day ceremony on campus,” said Rud. “We met the veterans when we invited them to our class as guest panel speakers to tell us their stories from a life course perspective.”

Working with the Ceremonies and Events staff and the Royal Canadian Legion Branch 26 Kelowna, the students’ role was to help raise awareness on campus about the event, said Ryan. “Activities ranged from putting up posters around campus and a display in the UBC Okanagan library to setting up a poppy table with baked goods as a fund-raiser in conjunction with Royal Canadian Legion.”

“We are also aiming to make the veterans feel as honored and welcomed as possible,” said Reid. “We are pairing up with veterans on their poppy campaign in the community, which helps us to better understand the vets’ histories and stories. We also feel that our presence at the poppy tables may help appeal to the younger crowd.”

The students’ connection with veterans through their project ensured that veterans were fully involved with planning the ceremony.

“We have learned quite a bit of about the vets and their history. Our experience has also increased intergenerational understanding,” noted Smith. “Through community service work we hope to learn more about the vets’ history, stories and the social stigmas around aging. We would like to thank the vets for this learning opportunity.”

The ceremony itself featured several students in important roles. O Canada was sung by student Stephanie Korour; student Matt Koovisk, a subdeacon with the Anglican Church, offered the benediction; and student Kim Ficke, a member of the Canadian Army Reserve, participated with DVC Doug Owram in laying a wreath on behalf of UBC Okanagan. Also on hand for the occasion were UBC alumnus (BA ‘47) and Royal Canadian Navy veteran Henry Hildebrand.