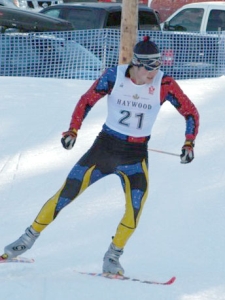 Third-year UBC Okanagan biology student Cameron Egan leaves for Italy this week to compete at the World University Games in Torino. The Games are the second-largest multi-sport event in the world, after the Olympics.

Egan is one of Canada’s top-ranked cross country skiers. He has been a member of the B.C. Cross Country Ski Team for the past six years and this year was selected to the Canadian National Team Development Squad. Egan races locally with the Silver Star Nordic Racing Team out of Vernon.

To stay at the top of his sport, Egan trains over 650 hours a year. During the summer the training includes running, roller skiing, weight training and three weeks skiing on glaciers in Kananaskas Country in Alberta. In winter he is on snow seven days a week, twice a day during the early season in October, November and December.

In addition to competing in Italy in January, Egan was selected to represent B.C. at the Canada Winter Games scheduled for March 2007 in Whithorse, Yukon.

His final competition will be at the Canadian National Championships in Quebec in March. As a student athlete this means juggling training and racing with a demanding undergraduate science academic load.

In addition to receiving support from UBC, Egan is sponsored by Atomic Skis, Salomon Boots, Swix Poles and Start Wax.

You can follow Egan and the other Canadian Team members at the World University Games by connecting to the web site: www.universiadetorino2007.org.