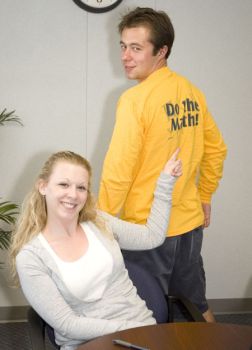 Without leaving his home in Penticton, math tutor Genadiy Selivanov can now help other university students work on their calculus skills. Forget the weather, and never mind the distance, math tutoring is going digital in a big way at UBC Okanagan.

“I live in Penticton; another student lives in Vernon. With online access, students can be anywhere and we can help them,” says Selivanov, who graduated in June with a Bachelor of Science degree and continues this summer as one of the UBC Okanagan Learning Centre’s 26 math and science tutors.

Working on campus or from home, tutors use small digital drawing tablets connected to their computers, typing instructions and encouragement while literally drawing math symbols and equations, walking through math problems step by step. Students connect with tutors using common Microsoft MSN Messenger software — a tool many students already have for instant messaging among friends and family.

“Before we began using the tablets, we had students who would be stuck on a problem at home at night,” says Angela Hollier, a third-year science student and one of the first tutors when the Math Centre opened two years ago. “With online tutoring, students can go online, connect with a tutor and get the quick fix they need, so they can move on.”

A drawing tablet costs about $110. The Math Centre plans to equip more tutors with the devices in time for the start of classes in September, says Learning Centre Coordinator Cindy Bourne. She notes that online tutoring opens the service to a lot more students, but it doesn’t do away with people helping people face to face.

“A lot of our students are commuters and don’t have time to access tutoring,” says Bourne. “Online will never replace the on-site tutoring services we offer, and most students generally prefer to spend time working directly with a peer mentor. But for those moments when the student is stuck, or cannot come to the campus for help, or for those who find the Math Centre too crowded, online tutoring can offer an effective alternative.”

And, adds Hollier, in the winter there’s less worry about tutors and students traveling to campus for tutoring sessions. The Math Centre on campus is open from 9:30 a.m. to 4 p.m. on weekdays. During the academic year, 30 or more students a day will seek help from peer mentors. “We have extended hours before exams,” says Hollier. “Right before a test we’ll work with 60 calculus students in a day.”

As they work through their math problems at home, students often turn to printed solutions manuals, but these guides lack detail in places. “They skip steps — we can quickly write that in and show the student what those missing steps are,” Hollier says.

“Typing algebra is very difficult, but using the tablets we can actually draw a picture instead.”

In their own homes — one in Kelowna, one in Penticton — tutors Hollier and Selivanov can don headsets and talk to students and each other via Internet connection. It makes tutoring a real-time collaborative effort, says Selivanov, “and it’s much faster than typing.” They are also able to record helpful answers to commonly asked questions, and replay them for other students later.

“This year, we really noticed some students struggling in chemistry and physics, and we’re going to expand this program into those subjects,” says Bourne. “We piloted it in calculus, but eventually all tutors will be able to use this technology.”