Rethinking the Evolution of Human Culture and Early Life 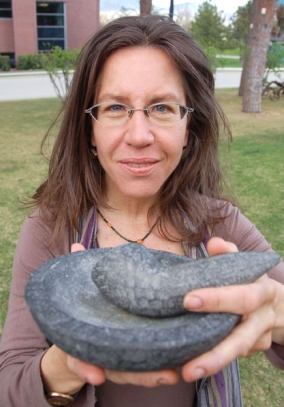 Cultural evolution researcher Liane Gabora is developing software that could help explain, for example, how the concept of a using a mortar with a pestle evolved.

One of Liane Gabora’s next projects will take her thousands of years back in time.

An assistant professor of cognitive psychology at UBC Okanagan, Gabora is developing computer software that will help archaeologists piece together the process by which human culture evolves.

“I’m interested in what sense culture constitutes an evolutionary process,” says Gabora. “The computer models of cultural evolution we have underway here will not only offer insight into the minds of those who came before us, but also make predictions about what kinds of minds will follow us, and the directions humanity is evolving.”

Archaeologists recently started using computer programs to record characteristics of the data they collect, such as the lengths of projectile points, or whether they have fluted edges. They borrow complex analytical methods from biology — such as cladistics, used to classify the evolutionary ancestry of species — to model how these artifacts evolve. But Gabora argues these methods are inappropriate for culture.

“For one thing, artifacts do not change solely through random, ‘mutation-like’ processes,” she says. “Humans innovate strategically and intuitively, taking advantage of the ability to group items that go together, like mortar and pestle, or use analogies.”

If, for example, a certain settlement acquired pots with handles through trade, and soon after started producing cups with handles, her computer program will be able to suggest that they used analogical thinking to abstract the concept ‘handle’ from pots and applied it to cups.

Gabora’s current direction capitalizes on her early start in theoretical biology; she earned a master’s degree and even began a PhD in it before realizing that what she was most interested in was not how organisms evolve, but rather how culture evolves.

“The underlying mechanisms by which culture evolves are superficially similar yet profoundly different from those through which living things evolve,” she says. “A symptom of this profound difference is that biological evolution prohibits inheritance of acquired characteristics.”

If a rat loses its tail during its lifetime, its offspring still have tails of normal length — the acquired change is not transmitted. But that is not the case with culture, Gabora points out.

“If someone invents putting a handle on a pot, then forever after pots can be made with handles — the acquired change is transmitted,” she says. “That is another reason you have to take cognition seriously in modeling how culture evolves. The changes that one mind makes to an artifact are passed on to others who in turn put their own spin on it. Acquired change is not lost, as it is in biology.”

And unless this kind of acquired change is negligible compared to change due to natural selection, or ‘survival of the fittest’ (which involves change from one generation to the next due to heritable differences amongst individuals competing for scarce resources), the process is not Darwinian.

To make her arguments about culture evolving through a non-Darwinian process more convincing, in 2006 Gabora published a paper in Journal of Theoretical Biology arguing that even the very earliest living things did not evolve through a Darwinian process.

Natural selection explains evolution through most of life’s long history, but Gabora showed that natural selection is intimately tied to the existence of a self-assembly code, such as DNA or RNA, which came into the picture only after self-replicating structures — structures that reproduced and exhibited ‘descent with modification — had already been around for some time.

“They replicated and evolved by generating, regenerating, and exchanging webs of chemical reactions,” says Gabora. “It was a sloppy way of going about it, but it got the job done. And interestingly, this kind of evolution allowed for inheritance of acquired characteristics, just like we see in cultural evolution.”

Gabora believes the computer models she is developing will help us to gain a better understanding and appreciation of the role we play in this very real second evolutionary process.

“Even if you don’t bear children and contribute to biological evolution you contribute to cultural evolution,” she observes. “Everything you do touches the world and can have an impact on someone else, potentially causing a chain reaction of little cultural changes that add up to something big.”