Pine Beetles: Out of the Forest, Into the City 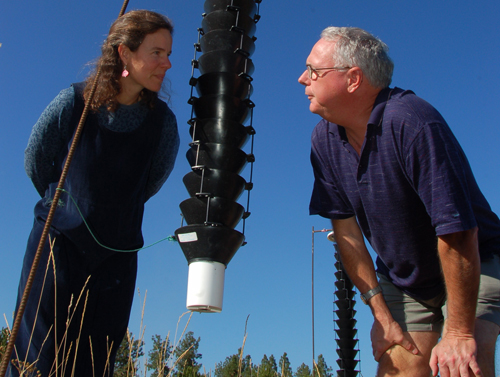 Bob Lalonde and Rebecca Tyson of the Centre for Species at Risk and Habitat Studies are trapping mountain pine beetles to better understand how they move through urban areas.

Mountain pine beetles are sweeping through British Columbia’s vast forests with highly destructive results, but their mass attacks don’t stop at the edge of town.

Working in one of B.C.’s latest beetle battlegrounds — the city of Kelowna — biologist Bob Lalonde and mathematician Rebecca Tyson of the Centre for Species at Risk and Habitat Studies at UBC Okanagan are combining their expertise to track how the mountain pine beetle spreads through an urban landscape during a mass infestation. Although extensive research has been done on the mountain pine beetle in a forest setting, there is very little information on how they work their way through a city, says Lalonde, Associate Professor of Biology and Physical Geography.

“Essentially, we have an empty playing field to conduct our research,” says Lalonde. “This summer, a mammoth infestation of mountain pine beetles arrived in the City of Kelowna, creating an interesting opportunity to pursue the beetle’s movements in an urban landscape from the beginning of an infestation. As you can imagine, many people, organizations and municipalities are interested in the project.”

In May, Lalonde and Tyson, with the help of two summer students, strategically placed 44 pheromone traps — which attract and capture beetles — around the outskirts of Kelowna, as well as in the centre of the city.

“Basically we are trying to determine how the bark beetle enters the city, what direction they are entering the city from and how they move while in an urban environment,” says Lalonde. “In addition, we plan to study the beetles themselves and look at factors such as how much energy is being burned in their flight path.”

Checked every week until their removal in mid-August, the pheromone traps contained anywhere from zero to 200 mountain pine beetles, depending on location, as well as pine beetle predators, providing data that can help determine how quickly predators follow the bark beetles into the city.

The next step in the research is to analyze samples and data collected over the summer and use the information to create a mathematical model that identifies dispersal patterns of the beetle. A number of variables will be considered, such as location of the traps, number of beetles trapped, number and concentration of pine trees in the general area, biology of the beetles, and weather conditions.

“Mathematical modeling often reveals interesting behaviors that aren’t anticipated,” says Tyson, Assistant Professor of Mathematics, Statistics and Physics. “We are using beetle biology, spatial data and math in an attempt to understand in greater detail how the beetle is moving through an urban landscape, which may help us gain insight into the risk of infection for pine trees in certain areas of the city. This could result in possible solutions or preventative measures.”

Although the mountain pine beetle infestation reached the city of Kelowna this summer, it will take a few months before the severity of the damage to the city’s trees is known. Lalonde and Tyson are working with the City of Kelowna to identify the areas most affected, and will use that information as a variable in the mathematical model. Next year, they plan another summer of data collection, which may focus on determining how many beetles are originating from areas within Kelowna as a result of this year’s infestation, as opposed to how many are still moving into the city.

“We are really just at the beginning stages of the project,” says Tyson. “There is still a lot of data to be collected and analyzed. One thing we can say with confidence though is that, based on early results, it looks as though bark beetles enter a city from the outskirts inward, as opposed to dropping randomly from above, as some people had originally suggested.”

About the Centre for Species at Risk and Habitat Studies