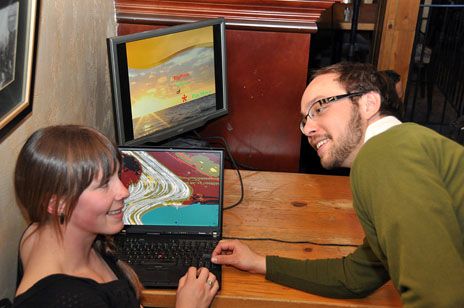 History may repeat itself, but sometimes the history lesson itself is brand new.

Going beyond the traditional textbooks, pop quizzes and final exams, students taking Jessica Stites Mor’s History 453 course at UBC Okanagan this term used the process of video production to learn about the cultural and social diversity of Brazil.

“The final project for the class was to produce a 30-minute documentary that would be appropriate as a teaching tool for the high school classroom or the general public,” she says. “The film had a chief editor, editor’s assistants, a director, montage developers, writers, narrators, a music editor, sound and image editors, website designers, and a film archivist, who developed a website for the film and managed ‘press releases’ on the project.

“The goal was to test the hypothesis that digital media could be a useful tool in communicating and teaching history. The side-effect of the project is that it turned all of the students into real-life filmmakers.”

Third-year history students Gustaaf van der Lely and Laura Banting took on the challenging roles of chief editor and editor’s assistant, respectively. Each committing more than 70 hours of their own time editing the documentary, they said that the process of using video as a learning medium was not only interesting, but fun.

“Learning isn’t all about essays and tests,” says Banting. “It’s a totally different dynamic when you’re applying your knowledge to create something that is meaningful to you.”

According to the individual student final reports at the end of the term this month, almost all of the 29 students who took part in the class project felt the same way.

“Given the amount of research needed to make a good documentary by the completion of the film, it’s difficult not to have a strong grasp on the subject matter,” wrote Corey Lowndes, third-year, political science and history student.

“In making a documentary you are exposed to many different sources of information  – music, photographs, videos, and art – that you wouldn’t encounter in writing a traditional research essay. These alternative sources of information appeal to the senses; they let the researcher experience history in a more complete way than simply reading about it.”