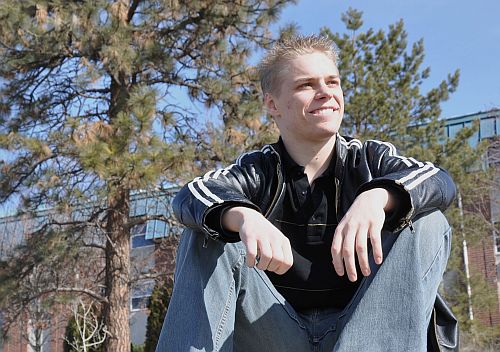 Arts student Daniel McMann hopes to go to law school after receiving his degree in June.

Whether Daniel McMann ends up at the helm of a big league hockey club or one day leading the entire country, this ambitious 22-year-old is looking forward to a future of limitless possibilities.

All set to graduate in June with a Bachelor of Arts degree in economics with a minor in political science, McMann is part of the first class of students to complete all four years of their programs at UBC Okanagan, which opened in 2005.

“I guess I would describe myself as a dreamer,” he says. “But I’m motivated, too, which is probably a good combination. I’ve been lucky to have people in my life that have been very successful, so I’ve always believed [success] is something I can accomplish, too.”

McMann says he’s not entirely sure how he defines success – but he isn’t ruling out anything. In fact, he’s on an educational path he believes will open all doors.

“After UBC Okanagan I’m going to go on to law school,” says McMann, who is awaiting word from top law programs around the continent. “Law I think is wonderful because it opens the door to everything.

Plus, McMann adds, almost every Canadian prime minister in the last 40 years — up until Steven Harper — has had a law degree. “And Stephen Harper has an economics degree, which is of course what my BA is in, so if I wanted to move into politics, it seems like law and economics is a pretty good foundation.”

McMann was able to pay for his entire UBC Okanagan education through a $20,000 four-year major entrance scholarship from UBC, awarded for academics and community stewardship. He has been actively involved in campus life — working as a resident advisor, helping develop the UBC Okanagan Young Liberals club, and serving as an announcer for the basketball and volleyball team — contributing to the legacy that will be left by the first graduating class to start and complete their programs at UBC Okanagan.

He also tutored his peers in the university’s Academic Resource Centre in the Math and Science Centre, eventually helping to expand the centre’s services by creating an economics advising service.

“When I first started working with the Academic Resource Centre there was no economics tutor,” says McMann. “So I went through the process of getting approval for creating one, and was subsequently hired to be the tutor. It has been neat to see economics grow as a discipline within the centre.”

Although McMann’s time at UBC Okanagan involved plenty of hard work, he made sure to make time for play as well. In fact, one of his fondest memories was a whirlwind 24-hour road trip with friends to Vancouver, catching the Canadian Football League’s Western final — B.C. Lions versus Saskatchewan Roughriders — before walking across the parking lot to GM Place and watching the Vancouver Canucks battle the Calgary Flames.

“The friends and memories I’ve made during my time at UBC Okanagan I will remember for the rest of my life,” says McMann. “One of the lessons I’ll definitely take with me from my time here is the importance of developing relationships with people.”