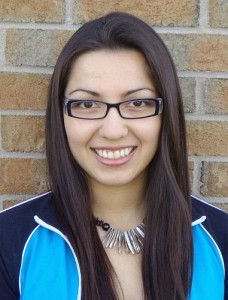 Krystal Summers knows what it’s like to pick up and move away from everything that is familiar to pursue an opportunity.

As she prepares to graduate from UBC Okanagan with a social work degree in June, Summers is also preparing for an entirely new adventure this summer in Peru. She looks back on her experience at UBC Okanagan as a stepping stone on the path to her next challenge: adjusting to life in the Andes Mountains.

In July, Summers embarks on a three-month research project where she will immerse herself in an Indigenous Peruvian community and learn the art of textile weaving, which is a local specialty.

“My own family does cultural craft making,” says Summers, a member of the Ojibway-Cree Nation. “So I have an interest in learning about craft making from other Indigenous cultures.”

Originally from Hamilton, Ontario, Summers made the decision to transfer across the country to UBC Okanagan to complete the last two years of her bachelor’s degree in social work. Her older sister had gone to UBC in Vancouver, and talked about the new campus situated in the sun-kissed Okanagan Valley. Summers, who wanted a UBC degree but preferred a smaller campus setting, knew the Okanagan campus in Kelowna would be a perfect fit for her.

“I looked up UBC Okanagan online and really liked the smaller campus,” she says.

Far from the comforts of home and living off campus, Summers says she was glad to find a strong, supportive environment at UBC Okanagan that aimed to foster connections within the Aboriginal student population.

“The peer support network was definitely one of the highlights of UBC Okanagan,” she says. “I actually got a job with the Aboriginal Student Service centre, which connected me to other students. I think it is so important to find that extra connection to learning and the university experience outside of your classes.”

After returning from Peru, Summers will head back to the classroom to pursue her master’s degree in social work at Ryerson University in Toronto.

“Then I wouldn’t be surprised if I ended up getting my PhD,” she says. “I’m really interested in a career in social work education and services (from) the Aboriginal perspective — especially in an urban environment. I want to work at both a practical, community level and an educational one.”

Ambitious by nature, Summers has always known that education would be a large part of her life.

“From a pretty young age I knew I wanted to pursue education, build my career and provide for my family — that’s what drives me.”