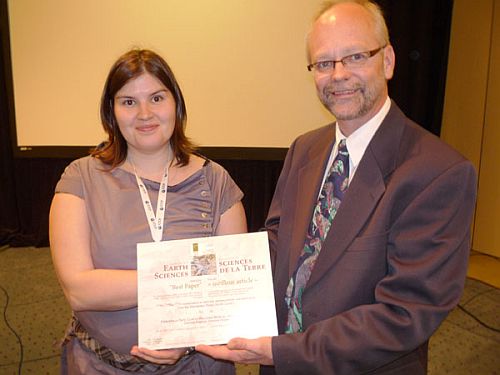 John Greenough, Professor of Earth and Environmental Sciences, was in Toronto May 25 to present an important new national award he helped create.

As editor of the Canadian Journal of Earth Sciences, Greenough presented the journal’s Best Paper Award to Christelle Not, lead author on a paper about an important advance in dating sediments in the Arctic.

“This is important to every human being on the Earth,” says Greenough. “The Arctic and Antarctic are the most important places on the planet to study climate change and better understand what causes it. Being able to date sediments is critical for that.”

Greenough established the award, shepherding it through the process of obtaining endorsements from the National Research Council of Canada and the Geological Association of Canada.

“This is a new national award in the geosciences — and there aren’t many of those,” he says. “They bring public attention to some of the great things being done in Canadian research and emphasize how this work is important to us all.”