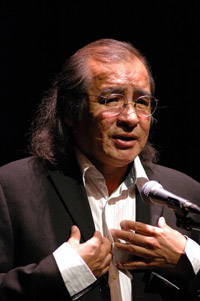 Highway will speak at the Rotary Centre for the Arts (421 Cawston Ave., Kelowna) on the topic of Aboriginal Literature: What, When, How, and Why?

“Highway was key in bringing Indigenous literature, art and culture to national awareness in Canada, when his play The Rez Sisters was performed before sold out audiences in Toronto in 1986,” notes Lally Grauer, Associate Professor of English at UBC Okanagan. “His work as director of Native Earth Performing Arts did much to encourage the development of Indigenous literature and drama in Canada.”

Highway is the son of legendary caribou hunter and world championship dogsled racer Joe Highway. Born in a tent pitched in a snow bank — in December – just south of the Manitoba/Nunavut border (near Saskatchewan), Highway now writes novels, plays, and music.

Of the many works he has written to date, his best known are the plays, The Rez Sisters, Dry Lips Oughta Move to Kapuskasing, Rose, Ernestine Shuswap Gets Her Trout, and the best-selling novel, Kiss of the Fur Queen.

For many years, Highway ran Canada’s premiere Native theatre company, Native Earth Performing Arts, out of which has emerged an entire generation of professional Native theatre artists (actors, playwrights, etc.). He has three children’s books to his credit, all written bilingually in Cree (his mother tongue) and English.

Highway divides his year equally between a cottage in northern Ontario and an apartment in the south of France, at both of which locales he is currently at work on his second novel.

“The Faculty of Creative and Critical Studies exists to celebrate creative culture through theory and practice, through doing and reflecting,” says Robert Belton, FCCS Dean. “Our mission is to present celebrated individuals who achieve at a very high level as both performers and thinkers, writers and musicians, artists and critics. Tomson Highway is one such individual, and it gives us very great pleasure to welcome him as the first speaker in our new series.”

The lecture is free and open to the public — it’s general admission and seating is limited. The talk begins at 7:30 p.m. and doors will open at 7 p.m.