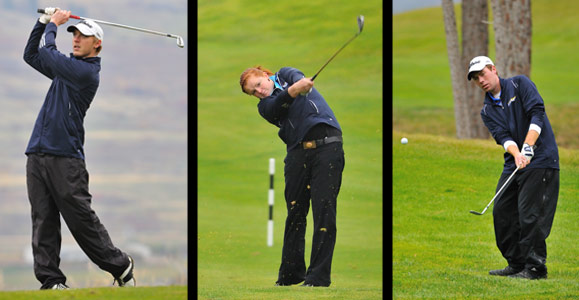 The UBC Okanagan Heat women’s and men’s golf teams put in a strong showing at all four league invitationals this season, placing first and third, respectively, in the British Columbia Colleges’ Athletic Association (BCCAA). Add to that a solid performance at this year’s national Canadian Collegiate Athletics Association Golf Open Championships in Windsor, Ontario, held October 17 and 18, and the university golf team has not only met but exceeded expectations in just its second season.

“Our women’s team of Jennifer Woods and Alana Kent finished second place at nationals, while the men’s team finished sixth place out of 15 teams,” says golf coach Adrienne Vedan. “Jen placed fourth in the country, and Alana came sixth. In fact, the women’s team will receive a banner to hang in the gym for a national silver medal. And on the men’s side, Jordan Krulicki ranked fourth nationally for his individual efforts.

“We’ve had a really strong, consistent effort this year and our golfers produced — as individuals and as a team,” adds Vedan. “They are a great group of young athletes, both on and off the fairways.”

The season also brought a number of highlights in terms of individual stroke play at the BCCAA tournaments for both the women’s and men’s teams. Woods and Krulicki each claimed top spot on the BCCAA tournament leader board this season, with Woods securing first place in three of the four invitationals.

This weekend marked the last tournament of the year, with UBC Okanagan hosting the invitational final on their home turf, The Okanagan Golf Club.

“It’s really a cool experience to host an event and bring everyone together at our university and our practice facility,” says Alana Kent, a first-year member of the UBC Okanagan Heat golf team.

“It has been a really fun, positive experience – even better than I had hoped,” says Kent.